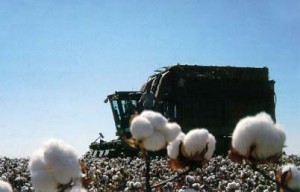 PCCA member Dennis Braden harvested 1,595 pounds of lint this year from the first picking on his farm 35 miles southwest of Coyanosa, TX.

A change in U.S./China trade policies could be looming in the future as details contained in an agreement possibly allowing China’s induction into the World Trade Organization (WTO) has caused concern for those in the cotton industry. In the agreement signed by China and the U.S. in November, the U.S. has agreed to support China’s WTO bid, and in turn, China has agreed to open its markets to foreign goods.

The agreement holds few benefits for the U.S. cotton industry and may hurt domestic textile makers, according to the National Cotton Council (NCC). The agricultural portion of the agreement will benefit the U.S. cotton industry with greater access to the Chinese market and a promise of less subsidization by the Chinese. However, China is self sufficient in cotton production, with the ownership of approximately 40 percent of the world’s total carryover stocks, and is not likely to import cotton of any significant volume.

The news of the recent agreement with China was not met with jubilation from U.S. textile makers who already face troubles on the domestic front with many charting poor earnings in the most recent quarter. The continuing influx of cheap imports from Asian countries has been blamed for the recent difficulties U.S. mills have faced.

“The China agreement is not yet written in stone since it is not effective until or unless Congress votes to grant China normal permanent trading relations with the United States,” David Stanford, vice-president of marketing at Plains Cotton Cooperative Association (PCCA) says. “The major unions and the American Textile Manufactures Institute will fight this,” he concludes.

Although the China/WTO agreement has caused concern about future U.S. cotton exports, recent healthy export sales numbers have indicated there is ample interest in U.S. cotton. The use of USDA’s Step 2 cotton user payments, which enable U.S. cotton to compete with world growths, appears to be doing its intended job. Step 2, which expired due to a lack of funding in December 1998, recently was reinstated as part of the fiscal year 2000 agricultural appropriations bill that President Bill Clinton signed into law in October.

“If anyone has doubts about the Step 2 program, they should look at our records of how prices fell when the program ran out of money last year and compare them to how prices have improved with the resumption of the program this fall,” Stanford says. “I hope domestic mills now can enjoy some improvement in their business as well with this help on their cotton cost,” he adds.

The cotton market not only has seen a noticeable rise in export sales, but equity levels to producers have risen despite a decline in New York Futures. Equity values started rising when Congress included Step 2 in its ag assistance package in early September.

Consequently, there has been strong merchant demand for grower equities over the TELCOT electronic marketing system, and many producers have chosen to make their cotton more attractive by placing it in the loan and offering it in equity form.

“In view of the recent adjusted world price (AWP) situation, merchants can carry the cotton for up to 10 months without incurring any storage costs or interest, making equities more attractive than free cotton,” Stanford explains.

The outlook for U.S. cotton in the upcoming year has improved vastly with the reinstatement of Step 2 funding, and export sales are expected to be robust for an extended period of time. However, the U.S. cotton industry certainly will be closely monitoring the continuing developments concerning the Chinese/WTO agreement while it studies the possible repercussions of the policy.