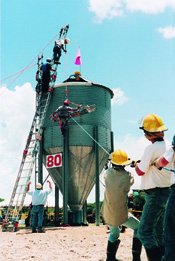 Over the past few years, farm safety has emerged in the media, state extension services and other organizations as a prominent issue in agriculture. Events like Progressive Farmer magazine’s Farm Safety Day Camp program try to educate and inform agriculturists about potential risks in their jobs.

In 1998, more than 40,000 children and 20,000 adults attended the day camp program and learned how to prevent accidents on the farm or ranch. Despite these efforts to increase awareness, agricultural accidents continue.

When an accident happens, some farmers are lucky to have trained individuals, including other farmers, come to their rescue. Likewise, emergency personnel are recognizing that much of rural Texas is involved in agriculture, thus fire fighters and others are attending training classes designed specifically for agricultural rescues.

Tim Hogue, an oilfield equipment supplier and assistant chief with the Sundown Volunteer Fire Department southwest of Lubbock, TX, assists in teaching an annual agricultural rescue class at the Texas Fire Training School at Texas A&M University in College Station, TX. The class was started by a group of individuals including Roger Fields, a code enforcement officer and volunteer fireman from Friona, TX, who continues to help instruct the course. Since its beginning, almost 700 firemen from 462 Texas fire departments have participated in the training.

Following the motto, “The Farmer’s Friend,” ag rescues training deals mainly with the threats posed by agricultural equipment, especially harvesters, and grain silos. Fields, who previously participated in agricultural rescues, conceived the idea for the class while searching for a better method of executing grain silo rescues. 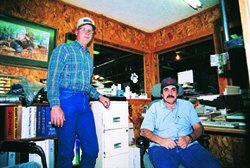 “We worked four actual accidents in one year and only had one rescue,” Fields says. “I was looking for better success and luck.”

In the early 1980s, Fields formed the first class with a group of about 20 individuals from Floydada, TX, who were experienced in tractor accidents. The eight-hour course was taught on a weekend, but it evolved into the more intensive class taught at Texas A&M in 1987. The Floydada class, however, continues to teach rescue skills to area volunteers.

Meanwhile, the weeklong course held in July at the Texas Fire Training School in College Station involves learning from a textbook and completing several rotations to gain hands-on experience in each rescue skill. The first day of the 30 hours of instruction is spent in the classroom reviewing procedures. The rest of the week is spent practicing the skills at different training stations such as an overturned tractor or a grain silo tower.

All instructors for the course are volunteers. Along with Fields and Hogue, instructors from Dallas, Kingsville and other parts of the state travel to College Station to assist with the class.

“We get a good representation of guest instructors from across the state,” says Jim Arnold, assistant division head for the fire school.

James Hyles, director of rescues programs at the school, adds, “The instructors that do come down are very diverse and come together to provide an excellent resource for this training. These guys actually have been out in the field and performed these rescues, so the experience they have is very valuable to the volunteer firefighter.” 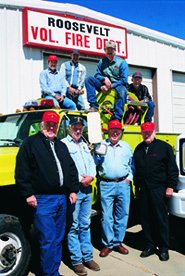 Along with personal experience, skill guidelines were developed in cooperation with recommendations from combine, stripper and other equipment manufacturers. Arnold notes that it has been helpful, since the manufacturers have the best knowledge about taking apart the equipment to extricate workers.

“Entrapment is probably the most frequent type of agricultural accident necessitating a rescue,” Hogue says. Entrapment training teaches emergency personnel how to take apart the machines to free the trapped person. The actual rescue can take anywhere from a few minutes to several hours. Ag rescuers also have to be able to save people from all heights and depths. Therefore, silo rescue is another topic covered in the class.

This detailed procedure involves helping those who slip and fall or are overcome by gas, dust, an explosion or some other element, and plummet into hundreds of cubic feet of grain.

“It is one of our most difficult rescues,” Hogue says. The grain acts like quicksand, sucking the worker down where he cannot be seen. “It’s like finding a needle in a stack of needles,” he continues.

Since this type of accident frequently can be fatal, rescuers must work quickly. The course teaches them how to build a ladder device, locate and remove the victim from the grain. Fields is partial to this part of the training since he wrote the grain silo rescue program.

“It’s my baby,” Fields says. “When I first started teaching this class, it was three hours on a blackboard. Now we have a 35-foot tower with which to train.”

The training tower holds 10 tons of plastic pellets comparable in size to grain milo. Since real grain would sour, it is the best way to simulate silo conditions. An actual person serves as the “victim” to make the procedure even more realistic.

“You can’t dig out someone who has fallen into grain,” says Arnold. “By experience, we’ve learned that it just causes them to become buried in further. This is how we developed the use of a barrel.” Grain silo rescues can be very time consuming.

Meanwhile, agriculturists themselves are recognizing the importance of volunteer assistance whether for farm accidents or other emergencies in their communities. Several members of Plains Cotton Cooperative Association (PCCA) participate on their local volunteer fire department. PCCA and Acuff Coop Gin member Bill Sides serves as fire chief for the Roosevelt Volunteer Fire Department east of Lubbock. A cotton producer since 1972, Sides has assisted the service since its formation.

In 1976, the need arose for a county-based fire protection service, and the county commissioner asked Acuff Coop for help. Sides, then serving on the gin’s board of directors, heard the request for help, along with other members of the gin, and became interested in the opportunity. 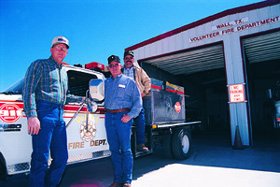 Barry Brodnax, a cotton, milo and wheat producer for 18 years, is another PCCA member who donates his time to helping others. Brodnax is assistant chief of the Wall, TX, Volunteer Fire Department located south of San Angelo, and he previously served as fire chief for six years. Like Brodnax, many other members of Wall Coop Gin participate on the volunteer service, and the gin itself serves as a dispatch center for emergency calls during the daytime hours. Brodnax says he really enjoys this form of community service.

“I feel like someone needs to be available to respond to an emergency,” Brodnax explains. “An emergency can involve your neighbors and people you know, and you feel good when you sacrifice your time to help someone.”

While the Sundown department and others are ready to respond to any rescue, Hogue urges agricultural workers to exercise caution and avoid potential accidents.

“Farmers and farm workers need to remember they work alone,” he says. “Safety needs to be paramount in their minds before they go to work each day.”

Hogue advises farmers to shut-down their machines before they attempt to do any work on them. He also encourages farmers to emphasize safety to their employees at all times and provide them with necessary tools, including harnesses and belts, to ensure their protection. Fields suggests farmers and other agricultural laborers not work when tired.

“A lot of accidents happen because of 16, 18, 20-hour days,” Fields says. He adds the best thing agriculturists can do is take their time and think.

“People don’t realize the risk they’re taking with this machinery,” Fields says. “You can practice doing these rescues all the time, but when you get to that scene, every situation is different.”

While unforeseen events can be the root of any accident, experts agree being cautious is the best advice. Hopefully, as awareness and education continues, efforts like safety camps will pay off and agriculture-related accidents will decrease. Roger Fields puts it best as he says, “I’d be happy if I never had to respond to another accident.”