Alexander Was the First But Not the Last… 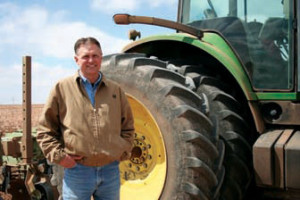 Mike Alexander was thrilled when Plains Cotton Cooperative Association (PCCA) introduced its line of SAFEDenim jeans, and he rushed to be the first PCCA member to order the new jeans produced by ACG and Denimatrix.

Alexander thought the new jeans fit his lifestyle. Farming always has played a prominent role in Alexander’s life. A third-generation farmer, Alexander was raised on a farm south of Roscoe in Nolan County. His agricultural background led him to a career in farming.

“During my high school years, I began to feel the call toward a life of stewardship of the land,” said Alexander.

He obtained a bachelor’s degree in Business Administration from McMurry University in Abilene, Texas, because he thought it would be helpful to prepare him for managing a farm/ranch operation. After graduation in 1976, he returned to Nolan County where he and his brother, Kim, began farming as tenants on land his father rented. Alexander’s oldest son, Justin, now operates this farm, located about a mile from where Alexander grew up.

Alexander and his family currently live in Colorado City, Texas, where his wife, Melinda, is the principal at Wallace Accelerated High School. They have six children, three of whom are married and have children of their own. The other three children still are in school and attend Colorado City ISD.

Alexander and his wife are partners in Alexander Farms which is mostly a crop-share operation. Dryland cotton is their principal crop, but they also raise wheat, milo, hay, rye, and triticale.

“I believe being a caretaker of land and animals is one of my God-given purposes in life,” said Alexander. “It is fulfilling to serve my Creator by caring for the land and by providing food and fiber to make life better for others.”

At the end of February 2009, PCCA introduced SAFEDenim jeans to its members. Alexander first caught word of the message through a flyer sent to the gins advertising the jeans.

When asked how he felt about PCCA’s new investment in Guatemala, Alexander said he believes Denimatrix is a good way to boost demand for cotton that is grown in this country and denim that is manufactured at ACG in Littlefield, Texas.

Alexander may have been the first person to purchase SAFEDenim jeans, but he certainly is not the last. As word spreads about SAFEDenim jeans, members are gaining interest in owning apparel made from their cotton and sewn by their cooperative.

“By purchasing and wearing the jeans, I thought it would be a great way to advertise apparel from cotton grown in my area and produced by a company in which I own an interest,” said Alexander.