B2B Trading Launched by The Seam 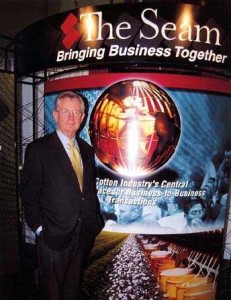 The world’s first truly online cotton marketplace, The Seam, successfully launched its grower-to-business (G2B) exchange in early December 2000 and continues to expand its customer base by visiting unexplored territory with its new business-to-business (B2B) electronic marketplace.

The Seam is the first Internet trading system that allows growers, and now businesses, to trade cotton in a neutral, online exchange. PCCA announced May 24, 2000, it had signed a letter of intent to form a joint venture with Allenberg Cotton Co., a division of the Louis Dreyfus Corporation, Dunavant Enterprises and Cargill’s Hohenberg division.

Kevin Brinkley, field marketing manager of The Seam, explains that B2B electronic trading has not been a common practice in the cotton industry. However, the new online marketplace allows businesses a means to trade anonymously among themselves. Brinkley says both the growers and buyers benefit from the new Internet-based company.

“Currently, PCCA members benefit by having a larger buyer network, and buyers benefit by getting a larger selection of cotton,” comments Brinkley. David Stanford, PCCA vice president of marketing, explains how the new Internet- based system is flexible.

“Cotton can be looked at in different ways on the system. Buyers and sellers can withdraw and counter offer cotton online,” Stanford says. He adds that although The Seam does have direct competitors, it has an edge over the other online cotton markets because The Seam has built its foundation on PCCA’s historic TELCOT® system.

The B2B market, according to Stanford, is being accepted and will improve cotton flow through the industry because cotton can be offered all the time.

“The future of The Seam is in the B2B foreign market,” Stanford continues. However, some trading issues must be resolved. For instance, in order to trade electronically in the foreign markets, participants will need an electronic title system because individual warehouse receipts are not common outside the U.S. There also is not a universal quality standard for cotton. It would be difficult to transfer U.S. quality standards to accurately determine the quality of all foreign cotton.

In addition to the B2B electronic marketplace, March 1 marked the beginning of new leadership as The Seam introduced its new CEO, Phillip Burnett.

Burnett accepted the position of President and CEO of The Seam after serving 12 years as the National Cotton Council (NCC) Chief Executive Officer. He also served as CEO of Cotton Council International and executive vice president of the Cotton Foundation. He left the NCC in 1982 to serve as Cotton Board president but returned as NCC’s CEO in 1989.

In a January press release about his leaving NCC, Burnett commented, “My decision was prompted by what I see as an exceptional opportunity to join an organization whose principals are, themselves, among the cotton industry’s more outstanding leaders. I fully expect The Seam to make a positive contribution to the economic health of the U.S. cotton industry, and I look forward to playing whatever role I can to facilitate that outcome.”