Another Challenging Year May be Ahead

A number of factors continued to weigh on the cotton market in the first three months of 2016 including negative macroeconomic developments and falling crude oil prices. A look at cotton futures prices paints a clear picture.

Global financial markets have been in disarray during much of 2016, influenced by China’s cooling economy which grew at its weakest pace in 25 years during 2015. Growth for the world’s second largest economy hit 6.9 percent following an outflow of capital, a devaluation of China’s currency, and a stock market crash last summer, according to one report. The developments prompted the International Monetary Fund to predict the country’s economic growth at only 6.3 percent for this year, but some outside observers believe growth will be much lower.

Another concern is China’s trade performance which was much worse in February than economists had expected. Exports fell 25.4 percent from a year earlier, twice as much as had been feared and the largest decline since May 2009. Perhaps in an effort to ease concerns, some economists noted the long Lunar New Year holiday that fell in early February this year. Also in an effort to reassure global markets, China’s Premiere held a news conference on March 16 and said “the country will not see a hard landing as long as reforms continue, although downward pressure on the economy persists this year, and China is set to achieve its annual economic growth targets.”

The fall in crude oil prices has had an obvious impact on investments, and it has made polyester prices even cheaper. Polyester prices fell from 52 cents per pound in August 2015 to 43 cents in January 2016, helping the man-made fiber to cut into cotton’s market share, especially in China where polyester has been the preferred fiber in recent seasons.

Despite the low prices for polyester, the U.S. Department of Agriculture predicts China’s cotton consumption will increase by 1 million bales in 2016-17 to 33 million bales; however, some analysts believe the country will import only 4.75 million bales in the coming season compared to 5.5 million in 2015 due to a limited import quota and the massive stockpile.

Another bearish factor has been anticipation of an announcement from China regarding its cotton reserve sales policy. Although not official, the policy was discussed at a meeting of the China Cotton Association on March 17.

According to reports from the meeting, the sales will commence in mid- to late-April, and the volume could total approximately 9 million bales. The first cotton to be auctioned will be imported stocks, and sales will continue until the 2016 harvest begins. The floor price will be based on international prices. 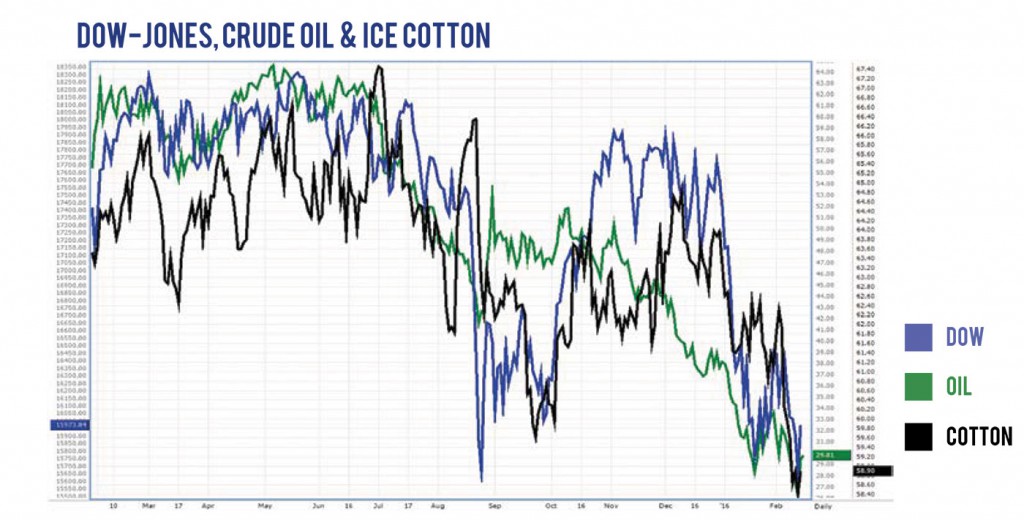 USDA provided some positive news when it released its monthly supply and demand reports on March 9. The department reduced its estimate for India’s 2015-16 crop by 1 million bales to 26.8 million and cut Pakistan’s estimate by 200,000 bales to 7 million, but it had little impact on the market. USDA made no changes to its estimates for China and the United States. The estimate for U.S. exports remained at 9.5 million bales which some observers question due to the current pace of sales and shipments.

Meanwhile, the market has started turning its attention to the 2016-17 season. The National Cotton Council released the results of its survey of farmers’ planting intentions in early February. It showed cotton farmers intend to plant 9.1 million acres this spring, up 6.2 percent from 2015, resulting in a crop of 14 million bales. Texas acreage was pegged at 5.066 million, up 5.6 percent from last year. Oklahoma farmers intend to plant 246,000 acres, up 14.4 percent, and Kansas acreage was set at 24,000, up 47.3 percent.

The opposite is expected in China where the China Cotton Association predicts a decline of 11.6 percent in planted area this year. The association said the reduction is the result of unsatisfactory prices and rising input costs. Despite the smattering of positive news, many uncertainties remain, and most economists and analysts believe 2016 will be another challenging year for U.S. cotton farmers.

While financial markets seemed to stabilize somewhat in early March, concerns remain regarding China’s economy. Likewise, no one seems to know where crude oil prices are going. So, until more definitive information is available regarding 2016-17 cotton production and consumption, traders and analysts surely will be keeping an eye on two factors in the coming months.

The first is speculators’ net short position in the cotton futures market which was still growing in mid-March and keeping prices low. Another factor is the amount of cotton remaining in the CCC loan which stood at 4.5 million bales in early March. Sooner or later, the cotton will be redeemed to avoid carrying charges and will be another burden on a depressed market.