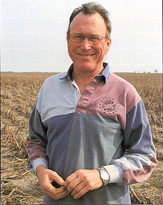 When Robert H. “Bob” Miller retired in 1996 following a 26-year career in the Kansas Legislature, he planned to travel with his wife Roxann and to change his farming operation near Wellington, Kan.

Little did he know how much the U.S. Farm Bill signed into law that year, often referred to as “Freedom to Farm,” would impact his operation. The ensuing years would bring dramatic changes on Miller’s farm and a new career: cotton industry leader.

Miller’s political career began in student government at Kansas State University where he graduated in 1967 with a bachelor’s degree in agricultural economics followed by two years of active duty in the Air National Guard. Then, in 1970, he ran against the incumbent from his legislative district and was elected to the Kansas House of Representatives.

Miller eventually became majority leader (1989-1990), minority leader (1991- 1992) and house speaker (1993-1994). Along the way, he received numerous accolades including Conservation Legislator of the Year, the Kansas Bankers Soil Conservation Award, KS Magazine’s “Best Legislator” Award, “Guardian” Award from the National Federation of Independent Business, and CASA Directors Service to Children Award. However, Legislator of the Year is the award for which he is proudest.

“That award had the most impact on me because I received it prior to my leadership role in the legislature,” Miller explains. When he retired from the legislature in 1996, Miller had been in the same office longer than any other elected state official, an obvious testament to his dedication to his constituents and popularity. Following his retirement from public office, however, Miller was not idle for long.

“The winter of 1995-96 was extremely dry, and my wheat crop was blown out,” Miller explains. “Despite my farm’s 100 percent wheat base, the new farm bill allowed me to plant sorghum and soybeans that spring, and some timely rain enabled me to have one of my best years ever,” he continues. It was enough to convince Miller that row crops had a future on his farm.

The momentous year literally coincided with another major development in Miller’s area; construction of the Southern Kansas Cotton Growers (SKCG) Coop Gin near Winfield, Kan, about 20 miles east of Wellington.

“There should be no doubt that cotton is a growing segment of Kansas agriculture,” Miller said. I had watched a neighbor about a half mile down the road plant a quarter section of cotton, so I decided to give it a try,” he says. “I planted 320 acres of cotton in 1996, and that was just the beginning.” Miller’s farming operation now includes 1,500 acres of dryland cotton and 1,200 acres of grain in a 100 percent no-till rotation system.

“Planting cotton in 30-inch rows into grain stubble protects the seedlings from wind damage, reduces wind erosion, and saves money on labor and equipment,” he adds. “In fact, I’ve not hired even part-time labor in the past three seasons.” Other than hiring custom spraying for insect pests and custom harvesters, Miller farms all 2,700 acres himself.

“Our average rainfall is about 31 inches per year in this part of Kansas,” he says, “and cotton works real good in a no-till system here.” Miller’s rotation system consists of cotton followed by wheat the first year. After the wheat is harvested the following spring, he double-crops with sorghum. The third year is devoted to a full-season sorghum crop, and the following year he starts over with cotton. In fact, approximately 70 percent of SKCG’s cotton is grown under this system.

“There’s not many producers in this area who switched to this type of rotation system that have gone back to conventional tillage,” Miller adds. “However, this system requires us to plan two years ahead.” Initially, the new cropping system presented an enormous challenge from weeds, but Roundup Ready cotton varieties helped solved the problem. 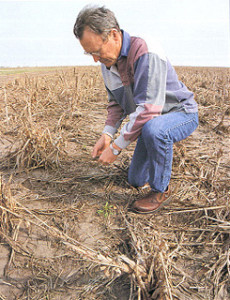 In early April, Miller checked a field where he would plant cotton in wheat and grain sorghum stubble left from the past two growing seasons.

After Miller plants his crops, his only farming activity the rest of the season consists of about 250 hours on an ATV spot spraying for weeds and scouting for insects. Cotton yields in Sumner County where Miller farms averaged 800 pounds per acre in 2002.

The spare time provided by his farming system has allowed Miller to become more involved in the cotton industry. He currently serves as SKCG’s board president, producer delegate to the National Cotton Council and president of the Kansas Cotton Association, an organization he helped create. In 2003, Miller was elected to the Delegate Body of Plains Cotton Cooperative Association (PCCA) and the cooperative’s West Texas/Oklahoma/Kansas Marketing Pool Committee.

The growth and recognition of Kansas’ cotton industry was demonstrated in early April at a meeting in Wichita, an event Miller spearheaded. Cotton producers and gin managers from throughout the state gathered there to hear PCCA President and CEO Van May address trade issues confronting the U.S. cotton and textile industries. Attendees also included the state’s Secretary of Agriculture, representatives of the Kansas Department of Commerce, Kansas State University faculty, staff from several members of the Kansas congressional delegation, and numerous media representatives.

“The meeting was a big success, and Van did a great job documenting the various issues facing our industry,” Miller says. “There should be no doubt that cotton is a growing segment of Kansas agriculture.”

His decision to retire from the Kansas Legislature was a difficult one for Miller. The experience he had gained and the leadership skills he had developed made him an effective state representative for his constituents. The same experience and political savvy today are paying dividends for Kansas Cotton.