As the calendar flips to the month of July, many farmers hope their crops would remain healthy, some producers prayed their recently planted crop would grow quickly, several south Texas cotton producers began preparing for harvest, and optimism ran high for the 2004-05 U.S. cotton crop. 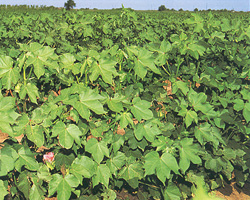 The largest reduction from the March report occurred in the Memphis Territory where producers shifted sizable tracts of cotton land to corn and soybeans following a dramatic March adjustment in prices favoring grains and oilseeds. Cotton plantings across the region were estimated at 3.5 million acres, 230,000 less than the report in March. Regional observers, however, suggest the decrease could be larger.

The acreage decline from USDA’s March intentions report was anticipated as market sources noted that low cotton prices prompted producers to plant more corn and soybeans. However, some market watchers were surprised USDA lowered its Texas cotton acreage estimate from its previous report.

USDA now pegs Texas cotton acreage at 6.0 million, lower than the state’s March planting intentions of 6.1 million acres but higher than the 5.6 million acres planted to cotton in 2003. On the Texas High Plains, 3.7 million acres were projected as of June 1, a 159,000 acre increase from the previous year. Meanwhile, farmers on the Rolling Plains increased their plantings by 29,000 acres to 880,000. The decrease in Texas cotton acreage from the March planting intentions mainly occurred in the central and southern areas of the state.

“As we entered July, the Texas crop looked great overall,” said Lonnie Winters, PCCA‘s sales manager. “There were no real trouble spots at all in Texas, and most of the cotton growing areas in the state had received good moisture. In fact, the West Texas crop looked just as good as if not better than this time last year,” he explained.

Producers on the Texas High Plains began planting their crops in May, and although the majority of the crop is doing well, over the course of the last two months some of the crop was lost due to adverse weather. Rain, hail, wind, blowing sand and lack of rainfall in some areas had destroyed an estimated 100,000 acres in the region by July 6. Additionally, up to 200,000 acres of dryland cotton south of Lubbock was dry planted and did not receive any significant rainfall, making it unlikely that the plants will survive, according to one analyst.

“We do have some ragged-up cotton, but by and large, most fields are doing very well,” said a Texas Cooperative Extension agronomist on the High Plains. “In my eight seasons at Lubbock, I haven’t seen overall stands and crop conditions as impressive as they are now. Many fields that were planted in a timely manner in May now are squaring,” he added.

Meanwhile, observers say cotton in the Texas Rolling Plains area is a “mixed bag” as the crop is in various stages of growth. A large portion of cotton was planted late as producers in the primarily dryland region waited for rain. By early July, most Rolling Plains growers reported adequate moisture for their growing crops, but some dry spots remained.

Plant maturation progressed rapidly in the Texas Rio Grande Valley where the season’s first bale of cotton was ginned on June 14. The growing season was winding down in early July, and producers were preparing to apply harvest aid chemicals to more mature stands soon. However, most of the crop had not yet fully matured, and widespread harvesting was unlikely to commence for another month. 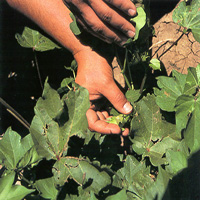 After a period of extremely wet weather, the Corpus Christi and Upper Coastal Bend areas of Texas had begun to experience a resurgence by early July. According to sources, the adverse weather delayed the crop, but producers still expected to begin harvesting in late July or early August.

Most Central Texas cotton growers have experienced an abundance of rain this summer. “We’ve had a lot of weather this summer, and the crop is in many stages of development,” said one area analyst. “In fact, some farmers in the Brazos Bottom lost their crop due to hail and replanted on June 22. The crop in that area normally is in the ground by mid-May,” he added.

An above average crop is expected in Oklahoma as producers throughout the state have reported good moisture levels. “I’m expecting a better crop in Oklahoma than we had in 2004,” an Altus, Okla., analyst said in early July. “The irrigated cotton around Altus looks good and, despite the fact that the lake is full, farmers haven’t had to irrigate yet,” he explained.

Further north, producers in Kansas also are expecting an above average year. Producers in Southwestern Kansas lost approximately one-third of their crop when a storm blew through in late June. However, according to sources in the area, the crop in Haskell and Grey counties still may be the best it has been in years.

The U.s. crop now is in the ground, and optimism abounds,” said Lonnie Winters.

“The crop looks excellent from the central to eastern areas of the state, and I’m expecting a much larger crop than last season despite the fact that most of the cotton in Southwestern Kansas is not doing well,” an observer explained.

In other crop-related news, USDA reaffirmed in June that the 2004 U.S. crop would set a record high for the percentage planted to genetically-engineered varieties. First suggested in USDA’s March planting intentions report, the National Agricultural Statistics Service (NASS) now reports that 76 percent of this year’s crop has been planted to all three types of genetically-engineered cotton compared to 73 percent in 2003. Insect resistant varieties (Bt) have been planted on 16 percent of U.S. cotton acreage, up 2 percentage points from last year, while 30 percent of the area has been planted to cotton resistant to herbicides which is down from 32 percent one year ago. Stacked gene varieties, which incorporate the attributes of insect and herbicide resistance, will account for 30 percent of 2004 plantings compared to 27 percent in 2003, according to NASS.

“The U.S. crop now is in the ground, and optimism abounds,” Winters said. “The cotton crop in our service area couldn’t be much better, and it looks like we’ll have less abandonment than we have seen in years. If the weather continues to cooperate, overall, we’ll have a good crop this year,” he concluded.