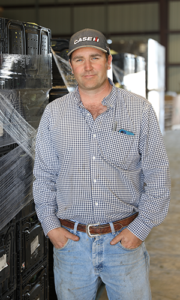 Brandon Laffere’s family has been farming in South Texas since the 1940s. Today, he carries on the cotton and vegetable operation his father and grandfather built with one thought ever-present in his mind: “Keep it growing.”

It wasn’t always Laffere’s plan to return to the family farm. His father passed away shortly before Laffere graduated from Texas A&M University with a degree in geography, and he returned to pick up where his dad left off. With one foot on the farm and the other in related ag businesses, he worked in crop research and seed sales for nearly 20 years. It wasn’t until the last 15 years that he began farming full-time. Laffere has quadrupled his farm acreage, leaned into technology, and kept a keen eye on the future.

Crop diversity is the name of the game on Laffere’s farms in Batesville and Uvalde, Texas, just southwest of San Antonio where he grows spinach, cabbage, lettuce, squash, and broccoli between October 15 and May 1. He rotates in cotton, corn, milo, and wheat on a two-to-three-year basis.

Laffere said one of the main differences in growing crops like cotton versus vegetables is the wiggle room for applications. His cotton acres have historically been more forgiving since vegetables are much more sensitive to insect damage. Laffere’s crop rotation recipe has proven beneficial to his yields over the years. His irrigated cotton yields are currently just below four bales on average.

“Growing vegetables can hurt your yields because you still have organic matter breaking down,” he said. “For example, if I have cabbage breaking down in the field while I have cotton coming up, the organic matter takes up a lot of the resources, but sometimes it helps you. The nutrients carry over from the previous crop. We made over five-bale cotton behind spinach two years ago. We don’t average that, but we can get up to five bales.”

Crop diversity isn’t the only thing keeping Laffere’s operation profitable. He knows the value of using technology wherever and whenever possible. He is seeing a positive impact on the farm by integrating fuel-efficient implements, strip-tillage and cover crops, and cloud- based employee management systems.

“We have completely upgraded our irrigation systems to where we can start and stop them remotely, and they have load management software where it will shut down at different times of the day and restart later,” he said. “That’s been a big help for us. It’s saved quite a bit of man hours – we don’t have to run around and check all the pivots in the mornings. It saves on fuel too. It’s a great time-management tool.”

Even though South Texas receives considerably more moisture than other parts of PCCA’s service area, maintaining soil moisture is still very important. Laffere capitalizes on his operation’s diversity by using previous crops as cover for the next rotation. Technology also comes in handy when Laffere is in the office, which on any given day could mean his truck.

“I have a laptop in my truck, and we do everything on the cloud, from our spraying practices and planting schedules – everybody can see what we are doing in real-time,” he said. “All of my farm managers have an iPad, so when we are harvesting, anyone on the team can pull records and tell you what has been harvested and what is potentially still out there based on yields and acreage. Instead of having to pick up the phone and call different guys, I just open my computer and see what’s going on. It helps us manage production and sales much more efficiently.”

Laffere also knows when to lighten his workload and outsource the marketing of his crops, whether cotton, corn, or others.

“I believe in the cooperative model, especially in this day and age,” he said. “I don’t have the resources to market certain items like cotton. Co-ops can do a better job. It’s probably the most efficient way around here to do things. I know at the end of the day, it’s marketed correctly, and we get a good return relative to the market. We don’t always get the highest price, but year after year, it has worked for us.”

The decisions Laffere makes today impact the future of his operation.

“My wife and I have a son, Beau, and daughters, Caroline, Madie, and Evelyn,” he said. “I see them being in this business if they show an interest. We believe in the stewardship of the land and its resources. Taking care of the land, our employees, and this business has value. We want to pass that legacy on to our children even if they don’t end up in this business.”

Two principles Laffere’s father and grandfather taught him to keep the farming operation in good shape were to be a good bookkeeper and to have a good work ethic. He’s also passing these down to his children.

“‘Keep your pencil sharp,’ as my grandfather used to say,” he said. “When you are living on the little margins that we live on, if you aren’t good at tracking it, you can lose it all real quick. That and the work ethic. That’s something most kids don’t see anymore. Everything is so instantly gratifying; you can have what you want in two seconds. On the farm, you have to wait and see your results pay off over months. That teaches them a new perspective on things, a good perspective on things.”

From his kids to his cotton and vegetable farming business, Laffere’s motto holds true.

“Keep it growing. If it’s not growing, it’s harder for future generations to get into it. Just keep it growing, whether it’s spinach today to apple trees tomorrow— you have to find what the next thing is that keeps your operation growing.”