Craig and Glenda Kitten and their Little Cutie 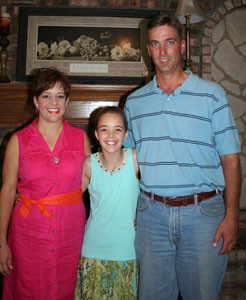 She is 11-years-old and already has bonus tracks! Andi Kitten, the oldest of her four brothers and sisters, is a member of the local up-and-coming singing sensation called the Cactus Cuties.

Andi’s father, Craig Kitten, is a PCCA member and farms 6,000 acres of cotton near Slaton with his three brothers. He and his wife, Glenda, said Andi started singing when she was very young.

“I noticed she could sing when she was two or three,” said Glenda. “She would sing in the back seat of the car all the time.”

She now has made her way from singing at the Cactus Theater in downtown Lubbock to appearing on the Disney Channel, visiting with celebrities, and she even helped write a children’s book about the National Anthem called “Oh Say, Did You Know.” The book includes a CD of the Cactus Cuties singing the Star Spangled Banner and two other bonus tracks.

The girls have traveled the United States singing the National Anthem and a medley of oldies. They have performed in San Antonio, Texas, for a Spurs basketball game; Arlington, Texas, for a Texas Rangers baseball game; Virginia Beach, Fla., on the 700 Club; Grand Junction, Colo., for Country Jam 2008 where the girls were able to visit with the country band Diamond Rio; Erie, Pa., for the 103rd Manufactures’ Association Convention; and Frisco, Texas, for a celebrity baseball game where they met Mark Cuban, Mike Modano and Michael Irvin.

Glenda said the National Anthem is what catapulted the Cuties into all of the great things they have been able to do, and she said she is very proud of that. 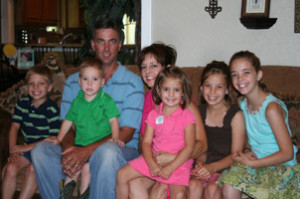 “The fact that it is the National Anthem and all it stands for just couldn’t be any better,” Glenda said.

Andi attends Kingdom Preparatory Academy and will be in the sixth grade next year. She takes tap and dance lessons and rehearses one hour every week with the Cuties in addition to a 30 minute voice lesson.

Andi’s parents have tried to keep her childhood as normal and down-to-earth as possible. Even though she has become a celebrity, Andi still has to perform her chores around the house. She washes dishes, sweeps the floor, tends to their pets, waters the flowers, and occasionally accompanies her dad when he works on the farm.

The Cactus Cuties have emerged from a simple singing class to an influential group that has connected with people across the United States and has touched the hearts of soldiers in Iraq with their strong, youthful voices. The Cuties have brought a new rendition of the Star Spangled Banner to Americans, and Andi continues to amaze people with her gift.