Steadily increasing cotton production on the Texas Rolling Plains, punctuated by a potential for consecutive record receipts at PCCA’s Rolling Plains Cooperative Compress (RPCC), has prompted an expansion of storage capacity at the facility in Sweetwater, Texas.

The decision to expand the RPCC operation was finalized in May 2004, and construction began later that month. Covering 144,000 square feet, the new building will store up to 36,000 bales of cotton, increasing RPCC’s total storage capacity to approximately 342,000 bales. RPCC Manager Gary Setliff explains there were many factors supporting the decision to expand the warehouse operation.

“The new building was needed because of last year’s record receipts and the expectation for another good crop this year,” Setliff says. Favorable weather and increased utilization of PCCA’s marketing services are two factors that have boosted RPCC’s volume in recent years.

“Due to the tremendous crops that producers have delivered to the warehouse, the need for additional storage space was essential, and this is always a good challenge to have.”Dean Church

“The volume of cotton we have been receiving has exceeded our storage capacity,” says Setliff, “but it also has provided the working capital to build this new warehouse.

PCCA’s Vice President of Grower Services, Dean Church, stated careful consideration of long-term production was a factor in deciding the budget and the size of the storage facility.

“Even though our immediate need for storage is greater than this one additional warehouse, we felt it was a good, conservative step to increase capacity without having to take on any long-term debt,” Church says. However, the new warehouse will stand as the largest building at the facility.

“The size of the building allows us to handle more bales more efficiently with less operating costs, therefore, it will put more money in the producers’ pockets,” Church adds. The new warehouse was intentionally designed to be larger than normal – three times the size of any other warehouse at RPCC – to reduce insurance costs associated with storing “yard” cotton. 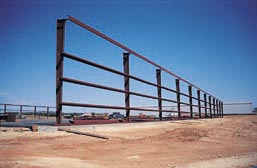 Construction of the new building began in late May 2004, and it is now the largest warehouse at Rolling Plains Cooperative Compress with space to store up to 36,000 bales of cotton. Photo by Lynette Cockerell

“Because of the universal density (U.D.) cotton bale, which bears less flammability hazard, insurance companies now allow us to store more cotton in a given area than we were able to store in the past,” Church says.

RPCC has experienced near-record and record volumes for the past two years, providing a basis for construction of the new building at Sweetwater. In 2002, more than 370,000 bales were delivered to RPCC, up 32 percent from the previous year and the second largest volume in RPCC history. The 2003 crop year proved to be even better. Although the crop faced adverse weather earlier in the season, a record number of bales, just shy of 400,000, were stored at RPCC.

“Although none of the coop gins that store cotton at RPCC had record- breaking years in 2003, they all had good enough crops combined to deliver a record volume to the warehouse,” Setliff says. “Everything just worked right after replanting,” he adds. Setliff also says RPCC currently expects another record crop this year with a total in excess of 450,000 bales.

“There for a while it looked like we were not going to get enough heat units, and we still probably will not, but the crop is looking excellent,” Black says. “We are going to be in good shape, and I expect a record crop for the gin,” he says. Current estimates place Roscoe Coop members’ crop at 31,000 to 32,000 bales.

“Due to the tremendous crops that producers have delivered to the warehouse, the need for additional storage space was essential,” Church says, “and this is always a good challenge to have. That’s why PCCA and its divisions continue to look toward and plan for the future.”