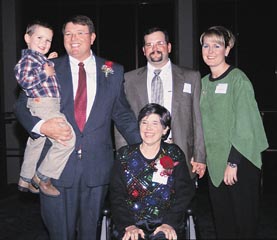 Among the three recipients of the award, Smith was recognized for his leadership and achievement in agricultural production. He is a 1973 graduate of Texas Tech University where he earned his bachelor’s degree in agricultural economics. In 1984, Smith joined the board of directors at Plains Cotton Cooperative Association and was named chairman in April 2004. Smith participated in the 1991 Cotton Leadership Program sponsored by Dupont and the National Cotton Council.

Smith has produced cotton with his father for nearly three decades near Floydada, Texas. He is a director of Floydada Coop Gin, currently serves as president of E and B Farm Enterprises, and operates a cow-calf operation with his son, Eric. Smith also is a delegate to the National Cotton Council, and he is the immediate past chairman of Cotton Incorporated.

“After looking at the list of past recipients of this award, it is such an honor to be among the individuals that have been named Outstanding Agriculturalists,” Smith said. Smith also recognized his family as a large source of inspiration and drive in his many endeavors.

The Outstanding Agriculturalist Award is presented annually to three individuals who have made significant contributions to the agriculture industry. The award is named after Gerald W. Thomas who served as dean of the College of Agricultural Sciences and Natural Resources from 1958 to 1970.