PCCA, Farmers Cooperative Compress (FCC), and PYCO Industries, the three regional cooperatives in Lubbock, all worked together to host the first Coop Producer Orientation on February 11th in Lubbock.

Charley Triplett, PCCA’s Vice President of Member Services, was in charge
of planning this event along with Eric Wanjura with FCC, Ronnie Gilbert with PYCO, and Taylor Hurst with PCCA.

Hurst, a PCCA Member Communications Area Manager, said the planning process for this event included many meetings and a lot of details including promoting the event and registration.

“There are a lot of small details that go into making this program work such as booking hotels, catering, buses, printed materials and preparing the actual program itself,” Hurst said.

Triplett said the topics discussed at the orientation were centered around the importance of the cooperative system on the local and regional level including operations of the regional coops and tours of PCCA, FCC and PYCO. He also said it
is important to reach out to current members because it is a good opportunity to get to know them better and to hopefully see some of the participants go on to hold leadership positions at regional and/or local coops in the future.

“We need to do a better job explaining that the same reason all of these cooperatives were started still exists today and is relevant in today’s environment,” Triplett said.

According to Triplett, working together with other cooperatives is valuable because PCCA’s relationship with FCC and PYCO is extremely important.

“Many of our members are also members of FCC and PYCO,” Triplett said. “We are all working for our membership and deal with many of the same challenges trying to provide the best service and returns to our members.”

Hurst said this event was important because it was the first introduction to the regional coops for most of the producers attending.

“Many of the producers that attended are young and most likely the future of their family farms,” Hurst said. “It was important that they leave this orientation with a new or better understanding of each coop and hopefully a relationship to build upon in the future.” 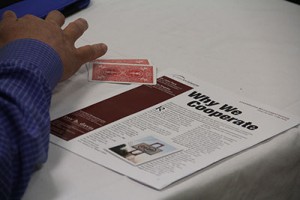 In the past, PCCA has hosted a Young Producer Orientation, but this year Triplett said it felt like a good opportunity to work with FCC and PYCO to offer a new program for any of the previous attendees that might be more interested in knowing about the three regional coops. He also added how the timing is unique in that PYCO and PCCA both have new CEOs.

When the time for the orientation came, producers arrived for the day and toured all of the facilities, heard from management and executives from each coop, and finished up the day with dinner at Texas Tech Club. Attendees also heard a presentation from Dr. John Park, a specialist for Texas A&M AgriLife Extenstion Service, about the benefits of working cooperatively in the industry. Dr. Park has spent the last 20 years working with businesses from farms to consumers and has great insights into what helps his clientele achieve competitive advantages. Dr. Park also is a director for the Texas Agricultural Cooperative Council.

“We had a great group of producers show up, and they all seemed to have enjoyed themselves,” Hurst said. “There was also a great amount of participation from the group which contributed to the program and the experience in a major way.”

Hurst said her favorite part of the event was getting to see that the attendees gain something from the program.

“Yes, cotton is their livelihood and their everyday routine, but there is so much that encompasses this industry, and you could tell that they understood that and were engaged,” Hurst said. “They were actually learning and getting to see some things for the first time. It was great to witness.”

Keith Clements, a farmer from Snyder, Texas, attended the event with his wife and his son who also is a farmer, and his son’s wife. Clements said having his whole family there was very important because they are all very involved on the farm. He said his wife handles all of the record and bookkeeping while his son manages his own farm.

“It is important that the whole family realizes the value of
the cooperative system,” Clements said. “I won’t be farming forever, and I want my son to understand how important our cooperatives are.” 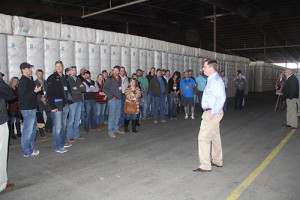 Ryan Heinrich from Lubbock said he attended the event because he felt as a new and beginning farmer he needed to know more background on the cotton business.

“It has opened my eyes to the fact that there is more that goes on than just taking cotton to the gin,” Heinrich said. “I realized how much of a big scale everything is on, and I have really learned more about what our coops do for us.”

Heinrich said he hopes there is an opportunity for this
event to be held every year because he feels it will improve communication about the importance of coops for producers.

“I think it is a really good thing for young farmers, and even farmers who have been farming their whole life, to attend to learn more about the processes and what all goes on in our coops,” Heinrich said.

PCCA President and CEO, Kevin Brinkley, said it is important to have events such as this one because it is vital to the future of the cotton industry and true farmer-owned cooperatives like PCCA, PYCO, and FCC to invest in educating younger members on the purpose and role of cooperatives.

“The Coop Producer Orientation provides an opportunity for younger members to see the importance and magnitude of the companies they have invested in,” Brinkley said. “Hosting the orientation with all three regional coops is the best way to demonstrate the value of the interlocking system between PCCA, FCC, and PYCO.”

Robert Lacy, President and CEO of PYCO, said this event was important for producers to attend from an education standpoint, and it helps the coops improve the way they get their information out.

“We need to educate the farmers, young and old, about the advantages they have within the regional coops,” Lacy said. “This event is something we should try to do every year to continue the education process.”

Ron Harkey, President and CEO of FCC, said the orientation is a very worthwhile program that benefits the coops as they get to know their members while benefitting the members as they learn more about the assets they own in the regional cooperatives.

“We have a great story to tell,” Harkey said. “I hope everyone had a good time and learned more about what the regional coops do for them, and I hope they share that story with their local cooperatives and spur some interest so we can have another good class next year.”

Looking forward to the future, Hurst said they learned a lot throughout this process that they could improve on to make the Coop Producer Orientation even more beneficial.