With a Little Help, an Old Deere Runs Again 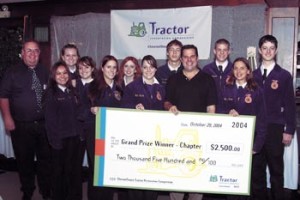 In Cotton Center, Texas, an entire high school senior class and two junior class members are a unique combination of individuals to participate in an agricultural mechanics contest, especially if the group consists of three homecoming queen candidates, four cheerleaders, two mascots, two football players, and a set of triplets. It was this group of FFA members, though, that brought home the grand prize from the Chevron Texaco Tractor Restoration Competition held in Louisville, Ky, in late October.

Ten members of the Cotton Center FFA chapter, most having ties to local agriculture, comprised the team that restored Ronald Clay’s 1939 John Deere H. Clay, a resident of Flomot, Texas, and a former cotton producer, is a friend of Cotton Center FFA advisor David Howell. Clay offered the tractor and funds for restoration because he wanted the students to remember their heritage in a largely agricultural area.

“The hardest thing to do was getting the students to realize they can fully restore an old tractor,” Howell explained about the year-long project, “but once they started working on it, it was like we were headed to the Super Bowl,” Howell said. “Some of the students were looking forward to the project, some dreaded it. Everyone was ready for competition, though, after we started making progress.” Team members included seniors Julie Heath, Jennifer Heath, Cody Heath, Brenda Marquez, Jessica Caswell, Amy Davis, Nikki Edwards and Brittany Swoap and juniors Jesse Masters and Heath Reeves. 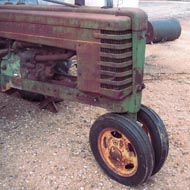 The team began working on the tractor in October 2003, and it was completed by March 2004. The project consisted of disassembling the tractor, cleaning the components, locating and purchasing replacement parts, and piecing the tractor back together. The old tractor also was sanded and painted several times.

“The most difficult part of the restoration was knowing where to start,” stated team member Cody Heath. He described the venture as a challenging but rewarding experience, echoing comments made by his teammates.

“We all learned how to work with each other,” Jessica Caswell said. Members were expected to share the responsibility of the project as well as complete a competition workbook to record every aspect of the restoration project. According to Julie and Jennifer Heath, some people were surprised to see so many females involved in a competition usually dominated by males.

“When I tell someone that I helped fully restore a tractor, they look at me like I’m crazy,” Julie said. “They can’t believe that a girl would actually want to do something like that.”

“I’m excited to tell people that my classmates and I were able to fix and paint an old tractor,” Brenda Marquez added. “We learned that 99 percent is not good enough when you want something to work correctly. In order to compete at a national level, overlooking small aspects of the project could be costly.” 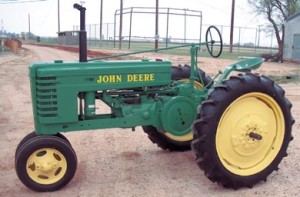 Although actual restoration of the tractor took just five months, members of the team often worked 25 to 30 hours a week, matching the time some students their age spend at a part-time job. Overall, the team put in approximately 700 hours of work into the tractor they named “Johnny 5.”

“Our team named the tractor ‘Johnny 5′ because it took us five times for us to get some things to work right,” Howell said. Certain aspects of the restoration required simple trial and error to ensure proper operation of the tractor. The project was not without its exciting moments, according to team member Heath Reeves.

“When we first got the engine to turn over and run, we were all cheering and shouting, even Mr. Howell,” Heath said. “It turned out Mr. Howell wasn’t shouting because he was excited, he was watching a hole in the housing where oil was pumping out because we forgot to replace the oil line on that part of the engine.”

“At the time, there was no kill switch on the tractor, so Doyle just grabbed the spark plug wires and pulled them off the engine,” Howell said. “That was the first time I’d ever seen anyone do that without getting shocked with electricity.”

Doyle McFerrin, a tractor mechanic and owner of McFerrin Tractor Co. in Lubbock, Texas, let the team use his shop and his tools to work on the restoration project. Howell explained McFerrin was a mechanic that wanted to pass his knowledge of tractors to the next generation. McFerrin played a large role in teaching the team members how to rebuild the tractor, and he explained how components of the tractor worked and why each part is needed.

While McFerrin assisted with the mechanics of the tractor, team member Jesse Masters’ grandfather, Bobby Fulks, helped with any paint and bodywork the project required. Fulks owns Bobby’s Auto and Autoworks in Friona, Texas.

“We used expertise and support from parents as well as the community,” Howell said. In order to raise funds for the project, the team held a community supper and raffled off an air compressor. The Cotton Center Farmers Coop Gin helped fund the team’s trip to national competition, a donation Manager Willis Taubert was happy to make.

“We feel as one of the major businesses in the community, we need to try to do as much for our students as possible,” Taubert said, describing the students on the team as the future leaders of the agricultural industry in the area.

Since its creation in 1995, the Chevron Texaco Tractor Restoration Competition has helped develop and reward the determination, mechanical skill and business savvy of FFA members from around the country.

“The communication of knowledge is a core concept at Chevron Texaco, and this program is a perfect example,” said Kurt Schulte, Commercial Automotive Specialist, Chevron Texaco Products Company. “To finish their projects, these kids seek out knowledge from their teachers, advisors, family, friends and community. More importantly, they learn from each other,” he said. “A program that inspires kids to ask questions, interact, learn, and in the end accomplish the incredible, is something Chevron Texaco is proud to support.”