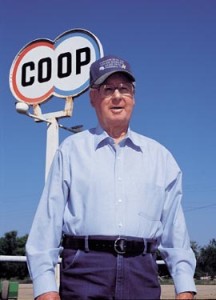 Stamford Coop Gin lies on the outskirts of Stamford, Texas. Like many cotton gins, the office usually is occupied by a farmer or two discussing crop conditions and the weather. But this gin has something others do not: Iredale Rogers.

Rogers is a 90-year-old retired farmer that stops by the Stamford gin every week to check on the crops and talk with other farmers. Cotton is in his blood, and after a lifetime of being around it, it is not easy to give up. Rogers also spent 13 years on the board of directors at the coop gin and continues to be involved with the industry in his retirement.

As he sits in a gin office decorated by his wife’s flower arrangement made partly of shotgun shells, Iredale Rogers’ eyes light up with a familiar fondness as he begins to recall the years he spent as a cotton farmer.

Rogers began farming on his family’s farm at the age of 12 and retired 53 years later. He raised cotton, maize and wheat, and in all the years that he was a cotton farmer, he ginned all but one year at the Stamford Coop Gin when he lived in Avoca, Texas, and ginned there, instead. Rogers witnessed many technological advancements in his years of farming. The most significant change was switching from mule teams to mechanized equipment.

“I used mule teams for a long time,” Rogers recalled with a grin. “You had to work awful hard that way.”

Rogers also witnessed many improvements in the ginning process. “Growing up,” he said, “I would see my dad leave in the morning to take cotton to the gin, and he wouldn’t be back until nightfall. It took him all day to get it ginned.” During the years Rogers farmed, he saw the cotton market at its best and at its worst.

“The best I ever sold cotton for was 42 cents (per pound) over the loan,” Rogers said. “I also remember when cotton was so cheap daddy just brought it home.”

“Iredale is the kind of person you want to be someday.”Rex Ford

“We had a hard time making a living sometimes,” Rogers said with a wry smile. In 1952, during the worst part of a drought, Rogers had a rough year and only produced two bales of cotton. Because of the bad cotton crop that year, he and his wife moved to Idalou, Texas, where Rogers found employment at Idalou Coop Gin, and his wife worked classing cotton in Lubbock.

Since retiring from farming, Rogers spends a lot of free time gardening and telling stories about the good old days to other farmers at the Stamford gin. One of his favorites is how he survived a tornado in 1953 that ripped the roof off his home. He and his wife, Loyce, woke up to the sound of thunder and lightning, and he went to shut the front door. On his way back to the bedroom, the top of the house was blown away.

“We didn’t have anywhere safe to go,” Rogers said, “so I just grabbed a quilt and covered us up. When we came out, there was hail piled up in all corners of the room.”