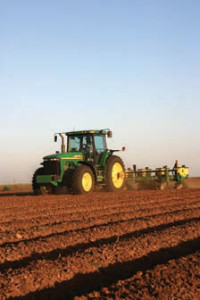 The beginning of each new cotton season brings a renewed market interest in governmental reports, planting intentions, and weather-related issues. With a recent renewal in cotton demand and hopes that the economy is headed for a global recovery in 2009-10, producers make preparations for another year.

Based on USDA’s final Cotton Ginnings report, the department’s U.S. production estimate was lowered 206,000 bales from its March figure. Additionally, domestic mill use was lowered 100,000 bales to 3.65 million as February mill use fell sharply. However, recent strong export sales and shipments prompted USDA to raise its export forecast by 500,000 bales which resulted in a 6.7 million-bale ending stocks figure.

USDA’s global picture for 2008-09 included lower consumption and higher ending stocks compared with the previous month. World production was reduced marginally due mainly to adjustments for the United States and Iran.

World trade showed marginal decreases as imports were reduced for Pakistan and Thailand. World exports also were reduced slightly as a sharply lower export forecast for India was partially offset by increases for the United States and Brazil. World ending stocks of 63.4 million bales were slightly above both last month’s estimate and one million bales higher than the beginning stocks level.

Meanwhile, as the clock ticks for South Texas cotton producers to get seed in the ground, the Lower Rio Grande Valley (LRGV) remained dry as April showers fell across most of the other cotton growing regions of Texas. Local analysts said many producers in the drought-stricken areas surrounding Corpus Christi, Texas, and south to the LRGV may not plant a single cotton seed this year. In fact, observers now expect the 2009-10 LRGV crop to come in as the smallest crop on record.

Beneficial precipitation in most areas of northern Texas, Oklahoma, and Kansas, coupled with soaking rains last September, have provided satisfactory sub-soil moisture for planting, according to analysts. Based on data compiled by the National Cotton Council (NCC), cotton plantings in Texas and Oklahoma in the upcoming season are expected to be marginally lower with decreases of 9.2 and 1.7 percent, respectively. Conversely, Kansas cotton producers are expected to boost cotton acreage by seven percent. However, some in the industry feel cotton plantings in all three states could increase.

“A lack of timely rainfall and an unexpected late freeze caused considerable damage to the dryland wheat crops in Oklahoma, Kansas, and northern Texas, and it’s highly possible that a great number of those acres will be replanted to cotton,” said Lonnie Winters, PCCA‘s Vice President of Marketing. “The three states combined could easily account for roughly 55 percent of the cotton acreage in the United States in 2009-10.” Due to the quality of the Texas, Oklahoma, and Kansas crops, demand for cotton from PCCA’s trade area continues to grow.

“Our cotton has started to gain more recognition for its quality, so we are able to continually increase our market share in the export market,” Winters said. “We are finding new countries to sell our cotton to and are expanding our presence in traditional export markets.”

Although demand prospects are positive, Winters expects larger-than-expected world carryover stocks in 2009-10 to weigh heavily on the market and, along with everyone else in the industry, wonders exactly how much cotton will be consumed in the world next year as the global recession continues to affect retail sales.

“We have a large number of carryover stocks to work through before the market will rebound to the levels cotton producers need to recover input costs,” Winters explained. “However, the healthy demand for cotton from this region has made us very optimistic about the upcoming season, and we are constantly working to foster new relationships that will result in even more sales for our members,” he concluded.