Saving the Lesser Prairie-Chicken from the Endangered Species List 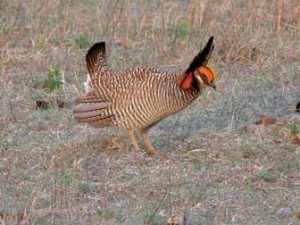 An extraordinary little bird recently found itself in big trouble. Once present in large numbers, the Lesser Prairie-Chicken (LPC) population has declined significantly since and now is a candidate for listing as threatened under the Endangered Species Act. Listing the bird would allow the federal government to modify ranching and farming activities in areas containing critical LPC habitat, prompting stake-holders to work toward increasing the population.

A ground-nesting bird native to the mixed grass prairies of the Texas Panhandle, Colorado, Kansas, New Mexico and Oklahoma, LPC numbers have plummeted by approximately 90 percent since the early 1900s. While Kansas currently harbors the most extensive remaining range and largest population of LPC, Texas biologists now estimate the birds occupy less than 50 percent of their former range in the Lone Star State.

Loss, degradation, and fragmentation of grassland habitats due to drought, improper grazing practices, land development, and conversion of native grasslands to cropland have contributed to the LPC decline. The already limited habitat is expected to be splintered further by wind industry and farm expansion, pushing the birds into small groups with low chances for survival, according to biologists and wildlife specialists.

The situation has perplexed experts as they wrestle with their desire to protect a vulnerable species while promoting renewable energy and co-exisence with farmers and ranchers.

“A healthy population of prairie chickens requires about 25,000 acres of mostly native range to survive and be healthy,” said Heather Whitlaw, a Wildlife Diversity Biologist with Texas Parks and Wildlife. “Lesser Prairie Chickens are a fragile and kind of selfish bird species from the habitat end of things, and any change in their habitat can be devastating to the population,” she explained. 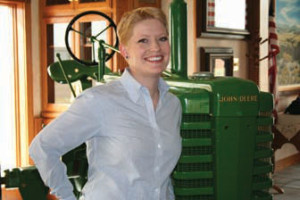 While the LPC refuses to adapt, land use practices continue to alter its habitat. The birds are wary of tall structures where predators can perch to see their nests. Recent studies conducted by Kansas State University showed a distinct avoidance of man-made structures by LPC. Generally, most hens avoided nesting or rearing their broods within a quarter of a mile of power lines and within a third of a mile of improved roads. Buildings, communication towers, tall trees and suburban homes also are LPC deterrents. More recently, wind energy development has become a major concern for conservationists.

Much of the current LPC occupied habitat in the Texas Panhandle and Oklahoma overlaps with land suitable for wind turbines. In fact, 87 of the 96 known LPC breeding areas in Oklahoma are within five miles of “excellent” wind farm territory, according to a federal report. Whitlaw feels the situation presents a need for proactive cooperation between wildlife managers and wind energy developers to prevent ecological or regulatory hazards to all stakeholders.

Grassland preservation also is of the utmost importance to the LPC population. Whitlaw cited that almost 80 percent of the land enrolled in the Conservation Reserve Program (CRP) will be up for re-enrollment in the next two years.

CRP grass cover supports a significant number of LPC populations, particularly in Kansas where expansion of the LPC is directly related to the amount of land enrolled in CRP planted to a mixture of native grasses. Wildlife biologists have identified the direct conversion of grassland to other land uses as the most common cause of LPC habitat fragmentation.

While efforts have been undertaken by state wildlife agencies, federal conservation agencies, non-governmental conservation groups, and private land owners, experts say conservation will be complicated since no regulations currently protect the bird. Although the Endangered Species Act would offer federal protection, the LPC currently is only a “candidate species” for listing.

“Classification as a candidate species basically means that the time and financial resources required to protect the lesser prairie chicken as an endangered species are currently being utilized for animals in more dire need,” said Whitlaw. “It’s important to rebuild the lesser prairie chicken population before the bird is listed to avoid the inevitable obstacles a federally mandated conservation program would cause for landowners.”

If the LPC is classified as an endangered species, the federal government would be responsible for LPC population management. Whitlaw explained that any landowner in a county containing the birds or any counties adjacent to LPC habitats will be required to consult with governmental agencies to ensure their land use practices do not harm the LPC. All federal agencies would be prohibited from authorizing, funding, or carrying out any program that would jeopardize a listed species or destroy or modify its “critical habitat,” the limited area where an endangered species lives.

The plight of the LPC and its impact on agriculture has captured the attention of a large cross-section of the industry. As a rancher’s daughter, a farmer’s wife, a mother of three, and an active conservationist, Lacy Vardeman has a unique perspective into all sides of the LPC predicament.

Vardeman has a strong love for agriculture as her father’s family has been ranchers in Colorado and New Mexico since the 1850s, and her husband, Dean, farms cotton south of Lubbock, Texas. Interested in conservation, she helped organize the Sand Hills Area Recreation Association (SARA) which concentrates on conservation and eco-tourism in the Texas Sandhills area of Bailey and Cochran counties. SARA operates in the heart of Texas LPC country.

“Anyone involved in ranching and farming is a conservationist,” Vardeman explained. “When you make a living from the land, you try your best to be a good steward and care for it without plundering and ruining it. I have been raised by my parents to take care of what we have been entrusted with in this world whether it be animals, land or water,” she concluded.

The success of conservation efforts relies on the cooperation and coordination of private landowners, land users, and public agencies to manage and conserve habitats for LPC. There are many opportunities for private landowners who want to manage their rangeland habitats, even CRP land, for the birds. The Texas Parks and Wildlife Department, the Natural Resources Conservation Service of USDA, and the U.S. Fish and Wildlife Service all provide confidential, voluntary, and non-binding technical assistance to landowners who want to manage for wildlife values.

“The situation has perplexed experts as they wrestle with their desire to protect a vulnerable species while promoting renewable energy and coexistence with farmers and ranchers.”

These agencies can provide information on cost-share and incentive programs to help defray some of the costs of habitat improvements. There also are many qualified people who are willing to help landowners determine if they have LPC on their property.

“If you have Lesser Prairie Chickens on your land, you obviously are doing good things,” Whitlaw said. Vardeman agrees the management of LPC habitat is compatible with good farming and ranching practices and believes conservation is a landownerÕs responsibility.

“In Texas, over 90 percent of the land is privately owned,” Vardeman said. “We literally own our state and the minerals and water under our property; therefore, we must be proactive in protecting and caring for our resources. It is not necessary for the government or any organization to care for our water and land if landowners step up to the plate,” she explained.

Do you have Lesser Prairie Chickens on your land?

A member of the grouse species, the Lesser Prairie Chicken (LPC) is approximately the size of a domestic chicken. According to Texas Parks and Wildlife, the LPC is mostly brown in color with darker, extensive horizontal barring on its breast, back, wings and belly. The adult male boasts a yellow- orange comb, dark, elongated head feathers, and a circular, pinkish-orange unfeathered neck patch that is inflated during displaying. Females are similar, but lack the yellow comb and neck patch.

The rare birds are best known for their unique mating ritual that begins in March and continues into May. Groups of males assemble on communal mating grounds, known to biologists as leks, to perform a colorful courtship ritual that includes strutting, stomping, cackling, jumping and bowing. The intricate mating dance is accompanied by a deep booming sound which occurs as the male inflates and deflates the orange air sacs on his neck. On a quiet spring morning, these sounds can carry as much as two miles across the open prairie, serving as an audible beacon to LPC hens.

The females generally begin nesting activities during the peak of mating displays, usually during the second and third weeks in April. Nest sites, which consist of shallow depressions lined with dried grass and feathers, occur on the ground in areas of tall grass. The females lay between 9 to 13 olive, buff colored or speckled eggs which hatch within 21 to 23 days. The chicks are able to run when they leave the shell, and can leave the nest within a few hours after hatching. By September, they appear full grown. If you see this bird, please contact any of the following: