This year, two programs have been launched to advocate for cotton and the cotton industry, Cotton LEADS and the Cotton Or Nothing campaigns.

Cotton Australia, The National Cotton Council, Cotton Incorporated and Cotton Council International (CCI) joined forces to launch a joint campaign, Cotton LEADS, to raise awareness of the responsible growing practices among cotton producers in Australia and the United States. Together, the United States and Australia are responsible for approximately 17 percent of the global cotton production. The five core principles of the campaign are commitment, recognition, understanding, belief and confidence.

“U.S. and Australian cotton users can take confidence in the Cotton LEADS core principles, which are built upon a track record of responsible production practices and a commitment to continuing improvement,” said CCI Executive Director Kevin Latner.

The Cotton LEADS campaign is targeted directly at textile brands, retailers and manufacturers committed to sourcing cotton that is grown in a responsible and transparent manner. Three members from each of the founding organizations will guide the activities of the program along with two members from partnering industry organizations.

“Ultimately, we are all committed to providing the supply chain with greater volumes of responsibly-grown cotton. Cotton LEADS is designed to assist businesses along the cotton supply chain with their sustainability goals,” said Cotton Incorporated President/CEO Berrye Worsham. “Apparel brands, retailers, and manufacturers require large volumes and a reliable supply of responsibly-produced fiber as well as proof of responsible production. Through Cotton LEADS, we demonstrate how cotton grown in the United States and Australia can help meet these requirements.” For more information on the Cotton LEADS program, visit www.cottonleads.org. 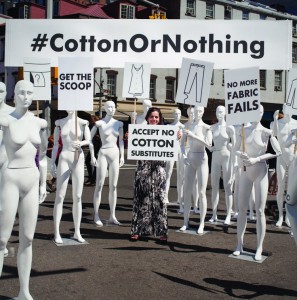 Mannequins took over the streets of New York City to launch a ‘Cotton or Nothing’ campaign during New York Fashion Week. Photo Courtesy of Cotton Incorporated

This fall, Cotton Incorporated also launched an individual campaign to promote the use of cotton in the fashion industry. Numerous unclothed mannequins made a statement on the streets of New York City as they began “protesting.” Their presence was part of the “Cotton Or Nothing” campaign from Cotton Incorporated which was launched anonymously during New York Fashion Week. The designated spokesperson for the campaign is Mannequin #9. Through this campaign, the mannequins invite consumers to “Join The Protest” by signing the Cotton Or Nothing Manifesto and take pictures with the mannequins. More than 300 people showed their support for the campaign by participating in the Mannequin Protest, a stop-motion short film created by Evan Boehm.

Since cotton’s big price run up in 2011, brands and retailers have been using less expensive synthetic fibers instead of cotton. This campaign is designed to convince brands and retailers to return to using cotton. This campaign is fueled by consumers’ increasing dissatisfaction with poorly produced clothing. The energy behind the campaign came from the Cotton Incorporated Customer Comment Project. This project quantified more than 250,000 consumer comments posted onto retailer websites.

“We knew from our Lifestyle Monitor survey that consumers were aware of and displeased by the substitution of synthetics in many of their traditionally cotton or cotton-rich apparel,” said Kim Kitchings, Vice President of Corporate Strategy and Program Metrics for Cotton Incorporated. “The Consumer Comment Project gave us a deeper dive into the specifics.”

As of mid-December, 98,881 people had joined the movement to protest against manufacturers replacing cotton with mystery fabrics. Complaints include pilling, odor, fading, static cling, and loss of shape.

“The cottonornothing.com website gives frustrated apparel consumers a forum to share their fabric fails and acts as a resource on how to avoid these disappointments,” says Ric Hendee, Senior Vice President of Consumer Marketing for Cotton Incorporated. “With every site visit, posting, and photo upload, apparel shoppers amplify the ‘Cotton Or Nothing’ message to brands.”