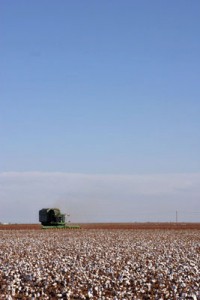 In his address at the Beltwide Cotton Conference in January, PCCA’s President and CEO Wally Darneille said good demand for cotton could persist throughout 2010. Based on both fundamental and technical factors, the strengthening of cotton prices seen at the end of 2009 should be sustainable. Darneille explained that consumers in other countries are not as in debt as most Americans because “they tend to spend less and save more.” In those countries, apparel sales have not suffered as much as in the United States and Europe. In spite of the global recession, the economies have continued to grow in the world’s two most populous countries, China and India. Fiber consumption also should benefit from continued income growth in Asia in the coming year.

Long term, the industry believes the growth in global cotton demand eventually will out-strip the growth in cotton supply. Cotton cannot be easily replaced since synthetic fiber production capacity takes time to build. As the “green revolution” continues, most consumers have begun to prefer natural fibers. Therefore, cotton demand in 2010 should remain stable as mills continue to produce cotton fabrics.

“The high cotton prices seen toward the end of the year likely are sustainable in 2010 if clothing retailers manage inventories well,” Darneille explained. “An additional dollar per garment should make no difference in demand because adding one dollar to the price of a pair of jeans probably will not discourage a consumer from buying.”

As a direct result of the global recession, many textile mills still are losing money.However,world fiber supplies now are low. Although a number of mills have indicated they cannot pay more for cotton than they did in 2009, Darneille believes they may have to do so very soon.

“They will not be able to buy cotton at last year’s prices, but there still are profits to be made in the apparel segment,” Darneille said. “Mills are accustomed to buying hand-to-mouth, and their cotton inventories are so low they will have to buy soon. It’s generally more expensive to shut down an entire textile mill than it is to pay more for cotton.”

The scarcity of cotton will remain a concern until the next crop cycle can offer supplies. While the Southern Hemisphere’s cotton crop is important, it is not large enough to relieve the prevailing shortfall.As the planting period of the Northern Hemisphere approaches, the relative value of cotton versus the crops it competes with for acreage will have to be assessed. The first official indicator for U.S. production will be the government’s planting intentions report set for release at the end of March.

Regardless of U.S. planted acreage in 2010, the average cotton yield is likely to be higher than it was in 2009.The excessively wet weather across most of the Cotton Belt during harvest time in 2009 was damaging to the cotton crop in many areas and lowered yields considerably. Forecasters attributed the year’s unusually wet conditions to an El Nino weather pattern which history shows should not continue for a second consecutive year. Market observers also say the extreme cold conditions across the country in the winter of 2009-10 should “put a large dent” in insect pressure in the season ahead.Not only would reduced insect pressure lower the cost of production in 2010, it also would incrementally add to yield potential as well.

The 2009 crop has been as hard to pin down as any in recent memory, and it appears that this will most likely be what is most remembered about this growing season once the dust has settled and ginning is finally completed. As the 2009- 10 harvest came to a close, the cotton market excitedly awaited the release of USDA’s January supply/demand report, but was disappointed by the lack of interesting data.In fact, analysts said the biggest surprise was the lack of surprise in the department’s figures.

USDA only marginally refigured its outlook for the cotton market, notably by lowering its 2009-10 U.S. cotton production figure and tightening the estimate for available domestic and world supplies.

USDA’s 2009-10 U.S. cotton estimate included slight decreases in U.S. production and ending stocks compared with last month. Production was lowered by 191,000 bales as reductions in the Southeast, Delta, and Southwest states were partially offset by increases in the Far West.

In the report, the department’s 2009-10 Kansas cotton production estimate was raised 3,000 bales to total 51,000 bales.Oklahoma producers now are expected to produce 330,000 bales, a 10,000 bale reduction from USDA’s December report, while the January estimate of 4.9 million bales in Texas was a 100,000 bale decrease from last month’s data.

Additionally, domestic mill use and U.S. exports were unchanged while the ending stocks forecast was reduced to 4.3 million bales or 30 percent of total use.

World 2009-10 cotton estimates were virtually unchanged from last month.Increases in production for China and Brazil were offset by decreases for India, the United States, Australia, and others.World consumption was lowered marginally due to reductions for Japan and Russia.Minor adjustments were made to world trade. The world ending stocks forecast of 51.7 million bales reflected a 15% decrease from the beginning level.

Texas always seems to be the exception to the rule. A state true to cotton, analysts expect an increase of at least one million acres in 2010 regardless of competing crops.