Building a Big Gin is No Small Decision 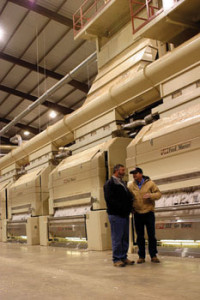 It was big news this summer when Lubbock Cotton Growers Cooperative Gin Gin (LCG) announced plans to build a new gin plant just south of Lubbock, Texas, but the story became even bigger when the facility was touted as the second largest gin facility in the nation.

As the cotton production in LCG’s service area continued to increase, its board of directors knew it was time for their gin to expand.They hoped to double the plant’s capacity, but choosing the best way to complete the expansion was no small task.

“In a good year, our members produce close to 100,000 bales or more,” said Jerry Butman, manager of the gin. “My guys were tired of getting their cotton ginned in March and were ready to get it ginned earlier, but the equipment we had just couldn’t do it.”

“At the older plant, bringing in much more than 60,000 bales stretched out the season which caused farmers to have to wait to get their cotton ginned, left modules out in the weather longer, and was hard on the gin manager and his employees,” Rex Kennedy, LCGÕs Board President explained. “Something had to be done to improve the situation, but building a new and bigger facility was not a small decision.”

Several solutions for expansion were explored by the LCG Board including visits to three different states to inspect used gins for sale. After determining new construction would be the most efficient choice for the cooperative, the gin was constructed as a turn-key project by Lummus Corporation of Savannah, Ga. 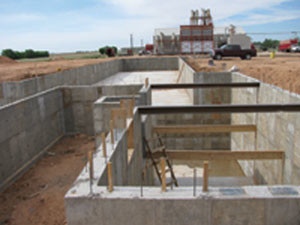 LCG’s new construction began in April 2009, and the facility was ready to receive cotton by late October. Photo Courtesy of LCG

“We had a meeting before we started this project, and every producer and landlord in attendance voted unanimously to move forward,” Butman said.

Plans for the gin had been under way since the summer of 2008 but were put on hold until construction prices dropped to make the project affordable, Butman said. Additional savings were negotiated by the LCG Board by “trading” the gin’s used equipment to Lummus for the company to resell. Groundwork began just north of the existing LCG facility on April 15, 2009, and the new gin was fully operational by late October. The LCG facility gained notoriety as the first completely new gin plant to be constructed within a 50-mile radius of Lubbock, Texas, in 25 years.

Initially configured for an hourly capacity of 90 bales-per-hour with a daily output target of 1,500 bales per day, the plant is the largest new gin installation in the world for 2009, according to Lummus representatives, and it still has room for expansion.

While the new plant, as currently built, will be the highest capacity single-site ginning complex in the state of Texas, the LCG Board of Directors also planned for future growth. The configuration of the facility is laid out in a “6 Less 1” arrangement which means the foundation and electrical components were constructed to grow into a full six-stand plant. With additional overhead cleaning and one more gin line and lint-cleaning group to be installed at a later date, the fully equipped LCG plant could reach 120 bales per hour (more than 2,000 bales per day), making it the second largest gin in the world. “You want to build flexibility; you want growth without a huge expenditure down the line,” a Lummus spokesperson said. “By laying it out like they did, it cost LCG a little more from a foundation and electrical standpoint for equipment that is not there, but the subsequent investment now will primarily be in machinery and installation only. That’s a good long-term strategy,” he explained.

Additionally, the LCG facility is set up so all of the existing equipment can be split into smaller units. “Half of the pre-cleaning can be run; we can run only one press; we can run only three gin stands,” Kennedy said. “We don’t have to run all of the connected horsepower at one time if we don’t need to. We hope that ability will be a major opportunity for cost savings.”

Adverse weather conditions resulted in an average crop in 2009, but Kennedy said the demand in the area will allow the new gin to develop and retain business regardless of the crop’s yield. He is extremely optimistic about the gin’s future.

“Cotton still is King in West Texas, and our production will continue to increase,” Kennedy said. “With the large plant we’ve built, when the good years come around, LCG is really going to shine.”