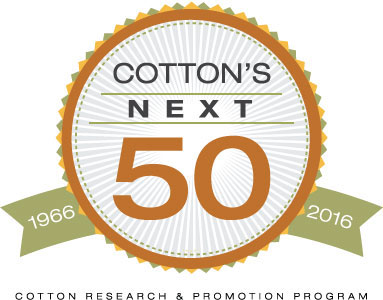 These words tell their own version of cotton’s age-old story. However, over the past 50 years, the fiber crop has become more than just a “fluff in a field” with no voice. In 1966, The Cotton Research and Promotion Program was enacted to fulfill the needs of weary cotton producers who needed a voice. Today, the Program is fulfilling the needs of the world and has a 50-year- long story to tell.

In the early years, cotton lost its prominence to the introduction of synthetic fibers in the market. According to Cotton Incorporated’s website, during the 1960s, clothing and fabrics made from cotton made up 78 percent of all retail textile products. With cotton’s commercial commodity status dwindling by the second, producers on the Texas High Plains combined their efforts with regional producer organizations and petitioned the Cotton Research and Promotion Act of 1966. The growers and organizations saw further success after Congress passed the act, and their efforts led to the creation of The Cotton Board later that year.

With a funding mechanism for cotton research and promotion in place, Cotton Incorporated was created in 1970 to monitor the marketing losses and gains of the cotton industry. By 1975, the amount of cotton in retail textile products had dropped from 75 to 34 percent. Upon the introduction of a push / pull marketing strategy focused on consumers and farmers, cotton’s decline as a commodity slowed, stopped, and finally began to rise again in 1983.

Bob Stanley, Southwest Regional Communications Manager for the Cotton Board, said the challenges in the cotton market that were present in the past are still present today.

“Fifty years ago when Cotton Incorporated and the Cotton Board were formed, we were in a period where we were losing market share fast to polyester products,” Stanley said. “Now, fast forward 50 years and we are losing market share because of new technology in manmade fibers, so our goal is really very similar to what it was in the days when the company got started. We have to come up with ways to attract this demand back.”
By 1989, the demand for cotton reached numbers that had been lost for nearly two decades. Cotton incorporated opened offices across the globe to keep up with cotton’s returning popularity, and the classic “Fabric Of Our Lives” campaign was launched.

In the years following the 1980s and 90s, new research developments were made and new marketing strategies were created to further the influence of cotton in American society. The 2000s held exciting events and ground breaking research for the company such as the “Cotton. From Blue to Green.” denim drive, which encouraged consumers to recycle their denim so it could be turned into home insulation; the “Dirty Laundry Tour,” which focused on educating college students on the care of their clothing; and the introduction of an ultra-low gossypol cottonseed for broader animal, aquaculture and human consumption.

The 2010s brought along more promise for the company. With the re-introduction of the “Fabric Of Our Lives” campaign came TV commercials featuring celebrities and even a 24-hour fashion runway show in Miami, Florida.

Dahlen Hancock, current Vice Chairman for Cotton Incorporated, said throughout the years the campaigns have helped the company retain its customer-focused standard of business.

“Most of Cotton Incorporated’s promotion efforts right now are focused on the consumer and increasing cotton’s share in the fiber market,” Hancock said.

The past few years of hard work by The Cotton Research and Promotion Program, The Cotton Board, and Cotton Incorporated have led to the fiber crop’s steady place in the American consumer market. According to Cotton Incorporated’s website, cotton holds a position at over 60 percent share of total textiles in the market today. The consumer- desired characteristics that cotton possesses (comfort, breathability, quality and ease- of-care) helped retain the status of the fiber crop in the trading world and continue to do so.

In order to help the farmers on the High Plains then and across the U.S., the company’s push / pull marketing strategy increases the demand for cotton in the consumer market and in turn helps farmers produce a bigger crop with lower costs. While a large component of the push / pull method is consumer oriented, the other large portion of the plan is farmer oriented.

“We are always looking for ways to help farmers produce a bigger crop with lower input costs,” Stanley said. “A lot of our efforts are going in that direction; everything we can do to help improve the producer’s bottom line.”

“I am very pleased with the success it has had over the years. We have been able to keep cotton as the fabric of choice,” Smith said. “That concept has been challenged and always will be challenged; but it is from those challenges that you grow.”

The drive and desire of growers from the High Plains of Texas years ago led to the enactment of The Cotton Research and Development Program Act, and ultimately to the creation of one of the largest advocates for the “fluff in a field” that finally, after 50 years, has a voice that cannot be silenced. The trials, as well as the successes that have occurred in the industry have built up half a century of lessons and stories to be learned from, but most of all a legacy that will be passed down to future generations.

“For me, it is about legacy,” Hancock said. “Our forefathers before us had struggles and hard times, and the industry has progressed and the program is still here. I have confidence in our industry and that we will persevere through the challenges we are facing today.”