40 Years of Cotton, A Lifetime of Memories 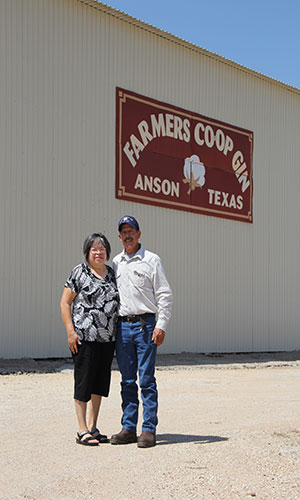 Ricardo Franco with his wife, Aida

Some people work to live. Ricardo Franco lives to work.

Originally from Julimes, Mexico, Franco learned the value of hard work at an early age. His parents both instilled in him a work ethic he can be proud of.

When he was 19 years old, he came to the United States and almost immediately entered the ginning industry. He worked in Estelline, Texas, for three years before moving to Anson, Texas, in 1976. This year he is celebrating his 40th year at Farmers Coop Gin in Anson.

“The gin manager from Estelline moved to this gin and asked me to come with him,” Franco said. “So me and my father-in-law came here and we liked it. The people here are really nice. It is wonderful. I love it.”

Ricardo said working with the people at the gin was more like a family than a group of coworkers.

“We are not talking about a boss and worker relationship. We are talking about really good friends,” Ricardo said. “I have worked with a lot of managers, but they have all been really nice. The farmers are really great to me. They respect me, and I respect them.”

“We became like family,” Jones said. “We were that close. He has told me many times that I am just like his sister. I feel the same way about him. Even since I retired, we have talked several times, and it really had nothing to do with the gin.”

Jones said she learned a lot from Ricardo while working with him. One of the biggest things she admired was his unwavering patience.

“He is a very patient person,” Jones said. “He was always very calm even when handling difficult situations. It was very seldom in the 20 years that I worked with him, I ever saw him angry. He just got along with people.”

Franco said one of the most challenging parts of the job is working with the seasonal employees.

“I always expected them to be as hardworking as I am,” Franco said. “I had to learn to hold back and not expect that. I care about the gin and want it to do well but not everyone thinks like that.” The most memorable season Franco remembers was in 2007 when they ginned 48,000 bales.

“We spent six months out of the year ginning,” Franco said. “Everyone was tired, and cotton was coming from everywhere. I don’t know where it was all coming from, but it just kept coming and coming.”

Franco managed to mix in some play with all of his hard work. He said he remembers in 1980 they had a lot of seasonal workers from his hometown in Mexico.

“We had enough people that we were able to play baseball in the cotton fields,” Franco said. “We had multiple teams. It was a really fun year.”

Franco has reached a milestone in his ginning career, and he has been married to his wife, Aida, for 41 years. Their love story actually began in a gin office.

“It was my first year working in the gin at Estelline, and she was the bookkeeper there,” Franco said. “Her brother and I worked together and were friends. One day I went inside to get a coke from the machine. I asked her if she would like one and she said no.”

One day Aida accepted his offer for a coke, and they have been together ever since. They now have four children and seven grandchildren. Franco said he has enjoyed watching his kids grow up and loved watching them participate in school events when they were in high school.

“I am really proud of my family,” Franco said. “They have all grown up and have wonderful jobs. I am really happy.”

Aida said when he is not working at the gin he is working at home. He also owns his own welding business on the side. Aida said he loves to weld, and he never stops working.

“One interview won’t be able to tell the kind of person he is,” Aida said. “Even after he goes home, he works. Everyday I have to tell him to slow down. He will work hard two or three days at home after he works at the gin.”

Franco is looking forward to ginning his 41st crop this fall and making many more memories.