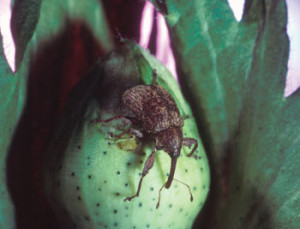 Boll weevils first made their way to the United States around 1892. The pests originated in Mexico and Central America and were first spotted in the U.S. near Brownsville, Texas. It has been estimated by the National Cotton Council that these small beetles have cost U.S. cotton producers more than $13 billion since entering from Mexico more than a century ago.

In 2009, U.S. agricultural officials confirmed efforts to exterminate boll weevils in most areas have been successful. Over the past year, the Texas Boll Weevil Eradication Foundation (TBWEF) covered more than 5.45 million cotton acres. Of those acres, 4.7 million are found in West Texas. In this area, the TBWEF caught a total of 195 weevils, down from 883 in 2008. Meanwhile, officials have declared that boll weevils have been completely eradicated in Arkansas, Missouri, Tennessee and Mississippi. Infestation still occurs in parts of Oklahoma and Texas, and officials are expecting to rid those areas of the “critters” in the near future.

In Texas, the eradication phase of the program takes place over a four to eight-year period depending on weevil populations and environmental conditions. First, every cotton field in Texas is mapped using a GPS system. Traps then are placed in these fields to detect whether they have been infested with boll weevils. Procedures such as cultural practices that reduce the pest’s food supply then take place to eliminate the boll weevils. The last step is to keep infestation to a minimum by controlling the boll weevil population using chemical treatments. 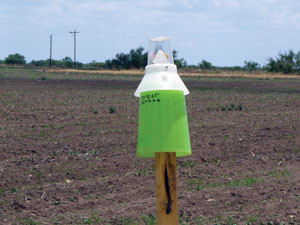 The program only applies insecticide and other treatments in infested cotton fields. Infested fields, however, normally receive an average of seven applications during the primary treatment period. Application of treatments is closely monitored to prevent unnecessary environmental exposure.

According to TBWEF’s Teresa Eliason, there are 16 zones in Texas where cotton is grown. All cotton producers and crop-sharing landowners in each zone vote to approve an eradication program. In Texas, every zone participates in the program, Eliason said. Of the 16 zones, the weevil has been either suppressed or virtually eradicated in 11 zones.

“This program has been very successful in terms of getting rid of the pest,” Eliason said. “There are still some parts of South and East Texas that have some infestation problems that we are working to eliminate, but the majority of the acres in Texas are weevil free.”

Eradication of the boll weevil offers several financial benefits to growers. The boll weevil destroys an average of eight percent of U.S. cotton crops annually which can be extremely costly to growers and can even force them out of business. After eradication in an area has been completed successfully, growers may see as much as a 10 percent increase in cotton yield. According to USDA, after eradication, the grower’s cost of production is considerably lower and the yield is often greater. It also becomes easier for growers to manage other pests by using integrated control programs. The Texas AgriLife Extension Service has estimated the increased farm-level returns attributable solely to eradication at $206 million in 2005 alone and $946 million from 1996 through 2005.

According to Eliason, producers are seeing a return on their investment. In the last five years, statewide yield per harvested acre averaged 707.6 pounds per acre, up from 524.2 pounds per acre in the prior five years. “These record- setting cotton yields provide convincing evidence that boll weevil eradication is giving Texas farmers the opportunity to compete successfully with other parts of the U.S. and the world,” Eliason said.

Some may have apprehension about the boll weevil reoccurring in cotton crops after they have been eradicated, but according to Eliason, prevention measures already are in place to assure that reinfestation does not occur.

Shawn Wade, Communications Director of Plains Cotton Growers in Lubbock, Texas, said the Texas Boll Weevil Eradication Program has been a cost-effective method to seeking a permanent solution to an economically damaging pest.

“The boll weevil eradication program has proven to be very successful considering where we are today,” Wade said. “The progress that has been made is something that cotton growers can be proud of.”