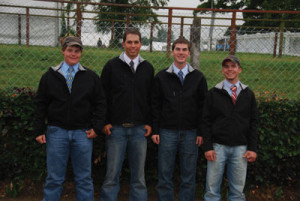 While competing against 46 teams from all over the United States, Jordan Clem, Heath Link, Corey Smith, and Trevor White were given top honors at the National FFA Livestock Judging contest in 2008.

After winning the national championship, these New Home, Texas, students were invited to the Highland Royal Classic, an invitation-only, international contest in Edinburgh, Scotland.

“The best part of this experience was getting to travel out of the country and see another culture and a different way of doing things,” White said. “Our team became stronger from competing together and sharing this experience.”

They competed against other FFA, 4-H and collegiate teams from the U.S. in this prestigious contest held in June 2009.

James Tabor, New Home agriculture teacher, said there were many differences in the way Europeans and Americans judge livestock. However, the results made it clear that the adaptation was not difficult for these passionate, dedicated young men.

American teams competed only in the beef and sheep divisions of the contest. Corey Smith and Trevor White won first place in the cattle judging contest while Heath Link and Jordan Clem placed third in the sheep judging contest.

Tabor said he believed these divisions were what the boys had shown the most strength in the year prior to the contest. During their two week trip, the boys also visited London, Paris, Belgium and Germany before returning home.

“It was our last contest to ever judge together,” Smith said. “Overall, it was a great way to finish.”

White is now an animal science major at Texas Tech University and a member of the 2010 meat judging team. He also will be on the 2011 livestock judging team and continue his passion for judging.

Clem will be attending Texas Tech in the Fall as an animal science major. He plans to judge on the livestock team as well.

Smith is now an animal science major at Clarendon College and a member of the livestock judging team. He said he plans to attend either West Texas A&M or Texas Tech University upon completion of junior college.

Link is a high school senior at New Home High School and continues to be active in FFA.