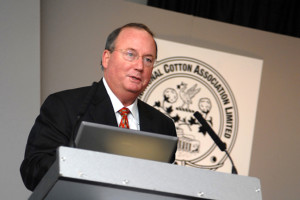 History was made in 2007 as PCCA‘s President and CEO Wally Darneille served as president of the International Cotton Association (ICA) headquartered in Liverpool, England. Darneille was the first-ever American to hold the organization’s highest office.

Formerly known as the Liverpool Cotton Association and established more than 160 years ago, ICA is the world’s foremost cotton association representing almost all cotton growing and consuming countries. Approximately two-thirds of the world’s cotton exports are traded under ICA rules and arbitration. The rules provide a framework for contracting and for the resolution of disputes.

Among his ICA duties, Darneille presided over the organization’s annual dinner in October in Liverpool’s Anglican Cathedral. The event is considered the most important gathering of the world’s cotton community as 675 cotton industry representatives from 55 countries attended the dinner.

“Wally’s ICA service this past year helped put PCCA’s name in front of all the members of the organization,” says Lonnie Winters, PCCA’s vice president of Marketing. “It also gives our customers and potential customers a level of comfort when purchasing cotton from us,” Winters adds.

“As president of ICA, Wally also helped increase the international community’s understanding of the U.S. farm programs,” says PCCA Chairman Eddie Smith. “This is important as we anticipate a new farm bill and continue to increase our export sales,” Smith says.

Darneille was elected to ICA’s Board of Directors in 1997 and served as Chairman of its Rules Committee before becoming First Vice President in December 2005. ICA also provides testing services and conducts seminars in Liverpool and throughout the world regarding trading rules, practices and new developments.