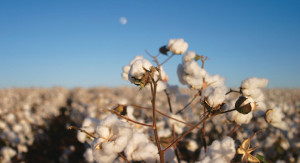 The number of acres planted to cotton in the United States has dropped sharply in the past three seasons with government reports forecasting further declines in 2008. The culprit is a rush into the biofuel sector and the resulting increase in demand for grains, like corn, to be diverted into the production of ethanol.

At the beginning of the year, the eastern and far western portions of the Cotton Belt still were experiencing a major drought, and the south central region was tolerating a relatively dry winter. If the dryness persists, it could influence whether winter wheat is kept until harvest, adjust spring crop planting decisions, and ultimately erode crop yield potential. Often the maker of trends rather than the follower, Texas could be the exception to the rule of lower cotton plantings in the upcoming season.

“I expect approximately 9.2 million acres to be planted to cotton in the U.S. this season,” Lonnie Winters, PCCA‘s vice president of Marketing said. “Cotton prices will have to either rally this winter to defend acres, or they’ll have to rally this summer to buy them back. I’m sure we’ll still lose a substantial number of cotton acres in the United States, but Texas acreage will remain stable.”

Cotton industry observers have said Texas, which planted 4.93 million acres to cotton in 2007, probably will plant the same amount this year. If estimates come to fruition, the state’s crop will account for more than half of the total acres planted to cotton in the United States.

“Due to new seed varieties, coupled with a successful boll weevil eradication program and weather conducive to a healthy cotton crop, the potential for high yields in Texas is astounding,” Winters said. “We’ve run out of time this year to plant winter wheat, and I doubt we’ll lose a sizeable amount of acreage to sorghum. The bottom line is that Texas producers, particularly on the High Plains, enjoy raising cotton.”

Meanwhile, cotton acreage in Oklahoma is not expected to match the 320,000 acres planted in 2006. Many Oklahoma cotton producers lost their crops in a crippling drought that year as only 180,000 acres were harvested. Producers planted wheat once the damaged cotton had been plowed under, and many have found it difficult to switch back to the fiber crop. USDA reported in January that 165,000 acres of Oklahoma cotton were harvested in 2007.

“We’re hearing from farmers early this season that Oklahoma will recover some cotton acreage, but I feel certain that at the very least we will match the acreage planted last year,” said Jay Cowart, PCCA’s director of warehouse operations.

In the northernmost portion of PCCA’s trade territory, many Kansas producers are comparatively new to cotton. Some industry observers believe it would be a small step for Kansas farmers to return to grain crops. Others tend to be more optimistic.

Before a sharp acreage decline in 2007, the total number of acres planted to cotton in Kansas had shown steady growth since the early 1980s when only 400 to 800 acres of cotton were harvested. In its January crop production report, USDA forecast Kansas farmers will harvest approximately 43,000 acres of cotton in 2007, less than half of the 110,000 acres harvested the previous year. Market observers in Kansas say the amount of cotton that will be planted in 2008 is, at this point in the season, highly uncertain.

Ginners are confident that many farmers will return to planting cotton, especially in arid western Kansas, because input costs such as fertilizer and irrigation are much higher for grain crops. Dick Cooper, PCCA’s director of Business Development in Kansas and Northern Oklahoma, remains optimistic about the upcoming season.

As the eternal optimist, I expect cotton to hold its own and even gain a few acres in Kansas,” Cooper said. “There’s no way we’ll make it back up to the 110,000-acre level of 2006, but I anticipate approximately 50,000 or 60,000 total acres will go back into cotton – weather permitting, of course,” he added.

“I expect less than a 10 percent reduction in cotton acres in our trade territory,” Winters commented. “I’m optimistic about decent cotton prices and stable cotton acreage, but it’ll be totally up to Mother Nature whether we’ll make a large crop,” he added with a smile.