Members Elect Pearson to PCCA Board 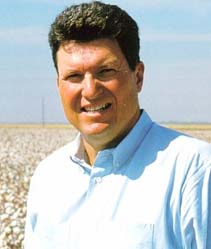 Following a living legacy is not an easy task, but that is what is in store for O’Donnell, TX, producer and leader David Pearson as he steps in to fill the void left by the retirement of L.C. Unfred from Plains Cotton Cooperative’s Board of Directors. Pearson was elected to the board in September, and he says he looks forward to his new responsibilities.

“I feel that it is an incredible honor to be on the board,” Pearson says. “I have some big shoes to fill.” Pearson believes many forward-thinking people in the cotton industry, such as Unfred, have preceded him and raised PCCA to where the cooperative stands today.

“I am very proud of the stability and financial strength that PCCA has attained in the last 10 years,” Pearson says. “It must continue.” Pearson also is very happy about recent upgrades on PCCA’s TELCOT computer system, and he feels that the system has enhanced gins’ bookkeeping capabilities and potential to utilize data.

“Farmers need to be more vertically integrated and become more involved in the profits later in the process. We (PCCA) can offer mills a packaged deal that is priced right, along with timely delivery and other extras as a team with our other cooperatives,” Pearson reasons.

Pearson has prepared for his PCCA Board membership through years of experience in the cotton industry. Aside from nearly 20 years of growing cotton, he has continued a three-generation tradition of serving on the Farmers Coop Association of O’Donnell Board of Directors, following in the footsteps of his father and grandfather. Pearson has been active in PCCA’s Marketing Pool Committee and recently was elected vice chairman. He also has been a delegate to PCCA and a director of Farmer’s Cooperative Compress.

On a national level, Pearson also is an active member of the National Cotton Council. He has participated in the Producers’ Information Exchange, where he met producers from other regions to exchange information and ideas, and the Cotton Coalition, a forum for producers and others in the cotton industry to learn how to cooperate with the media and prevent misinformation from being disseminated to the public.

Pearson’s parents, Kenneth and Elaine Pearson, raised him near O’Donnell where he graduated from high school. He received his bachelor’s degree in Agricultural Economics and his master’s degree in Finance from Texas Tech University. Following college, he went to work for a bank in Dallas as a commercial lender, which he says gave him the experience to run his farming operation as a sound business.

“I feel that (banking) experience also will help in my duties as a PCCA Board member,” he says. Pearson and his wife, Vicki, stay busy raising two boys, Reagan, 8, and Bradley, 5, and they are members of Southcrest Baptist Church in Lubbock, TX. Pearson also is an active member of the Red Raider Club at Texas Tech.

“PCCA must keep in its employ energetic and forward-thinking people who care about the long term livelihood of PCCA members and who are willing to be innovative and perceptive of ways to improve,” Pearson advises. He says he looks forward to his service as a PCCA Board member and the chance to contribute to PCCA’s vision.