A Leading Light Passes the Torch 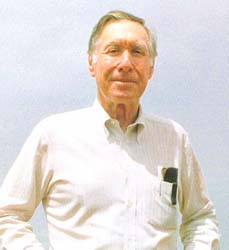 Deeply embedded in the history of Plains Cotton Cooperative Association (PCCA) and American Cotton Growers (ACG) denim mill is the life and leadership of L.C. Unfred, a visionary and a quiet leader who never sought the limelight. After a distinguished career as an agriculturist, Unfred retired from the PCCA Board of Directors in September. He says the highlight of his career was helping build the ACG denim mill in Littlefield, Texas, to use West Texas cotton.

“It was the biggest adventure because it never had been done anywhere in the world,” he says. “Building the mill changed the complexion of things on the High Plains as well as worldwide.” Unfred says the momentous development and implementation of the TELCOT electronic marketing system also was an important change for PCCA members that occurred during his career.

“I think the chairmen that preceded me would be totally surprised that we’ve made as much progress as we have. They wouldn’t believe the volume of business we have or the amount of electronics involved,” Unfred explains, referring to his predecessors and friends Howard Alford, J.O. Bass Jr. and Carl Sanders.

Unfred began his tenure of 25 years with PCCA in 1973 when he was elected chairman of PCCA’s Board of Directors, an office he would hold for 13 consecutive years. It was during this time that TELCOT saw its inception. Unfred also was the first chairman of the Marketing Pool Committee and served in that capacity continuously until 1998. He worked alongside fellow leaders who ventured into the unknown to build ACG and served as ACG’s only chairman until 1989. He was instrumental in the merger of PCCA and ACG in 1987, an acquisition which has led to hundreds of millions of value-added dollars for PCCA members.

Unfred was president of the New Home Cooperative Gin Board for 28 of the 46 years he was a member. On a national scale, he was active in Cotton Incorporated, the National Cotton Council and The Cotton Board. In fact, he served on the Cotton Incorporated Board of Directors for 20 years and was chairman in 1979 and 1980. During his career, he received a number of awards including Texas Agricultural Cooperative Council’s “Cooperator of the Year.” Unfred is very optimistic about PCCA’s future.

“We must be open to new developments that will mean more profits to our members,” Unfred says. “With the volume of raw cotton available in Texas and Oklahoma, there exists a tremendous opportunity for more value-added processing.” However, Unfred warns that PCCA should be slow and cautious in such pursuits because of the number of people already established in the textile business.

Although Unfred has retired from PCCA’s Board, he says he hopes to stay involved in the cotton industry, and he plans to continue operating his farm and attending meetings.