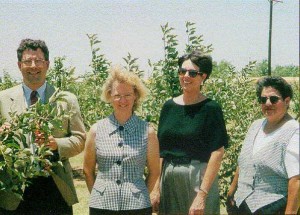 Among the important issues discussed on Oct. 8 at theCelebrating the Stewards of the Land conference was hunger relief and the South Plains Food Bank. Cloetta Shotts, director of the Land Use Division of the South Plains Food Bank, explained how the bank is going beyond just handing out food. It is working for a bigger and better, longer-lasting solution of addressing world hunger issues. The bank has five projects occurring at once which help the Lubbock community fight hunger problems.

One project is the Community Garden, a system which improves the look of the neighborhoods while providing interaction among neighbors. Lubbock has 22 community gardens, and the food bank hopes to implement more in the future.

The Carolyn Lanier Food Bank Farm, a project the food bank has been sponsoring for 10 years, is a five-acre farm which uses drip irrigation on three acres. Current plans are to install drip irrigation on the remaining two acres within the next year. The farm yields more than 100,000 pounds of produce each year which is shared with hungry families throughout West Texas.

Another project is the seven-acre George Elle Rotary District 5730 apple orchard. Shotts said the orchard has shown explosive growth since it began with 1,250 trees in 1994. More than 2,500 dwarf apple trees currently exist there. This year, more than 130,000 pounds of apples were harvested, compared to 70,000 pounds last year. Also, the food bank installed a cooler this year which allows increased storage and preservation capabilities for the apples.

The Market Garden, another project, is a great way for the food bank to help Lubbock residents learn how to provide for themselves. This is where low-income families take an eight-week course about how to grow vegetables in West Texas. Each family is allotted a 4,500-square-foot plot, water and seeds to use for crops. The families eat the food they produce and generate income by selling excess produce at the Farmer’s Market. 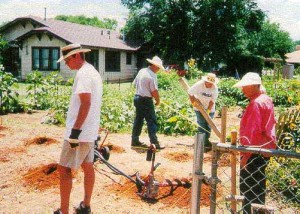 The Heart of Lubbock Community Garden.

The South Plains Food Bank is in the early stages of developing and implementing a project called Growing Recruits for Urban Business (GRUB). The inaugural 2001 program was made possible with the help of grants from the Criminal Justice Department and the USDA. The program will give teenagers and young adults, ages 14-21, the opportunity to develop, produce and market such products as apple relishes, salsa, jelly and more while being paid for their work. Shotts said the food bank hopes to involve 25 participants in this first year and expand each year.

“We will phase in more participants each year and grow as we go along,” said Shotts. Part of the planned growth will include promoting some of the participants each year. For example, after the young adults stay in the program their first year, they have a chance to be hired as a team leader the following year. As GRUB continues each year, the promotion of more teenagers will act as an incentive for them to excel in the program.

GRUB is a seed-to-shelf agribusiness program which teaches the youths, both in the field and in a classroom, how to start from scratch and grow great quality products. The students attend academic courses in the mornings to help them complete their GED, or, if they have already completed high school, to help them prepare for college. In the afternoons, they work at the food bank farm, learning about various agriculture techniques, equipment and activities. GRUB is a long-term commitment for the participants as it teaches them responsibility, entrepreneurship and work ethics.

With help from Texas Tech University, participants will learn marketing skills so they will know how to market and sell their products to the public. They will be responsible for designing their own labels, packaging and marketing plans for their products.

Shotts said the South Plains Food Bank continues to start new programs for low-income families and children because the opportunities continue to arise and become available.

“The food bank is so aggressive in helping people and helping people help themselves that we just don’t say ‘no’ to things that can help out,” said Shotts. In addition to local programs, the food bank participates in international hunger relief through its Breedlove Dehydration facility. Breedlove has sent healthy, nutritious food throughout the world where there is famine or other disasters. On the national level, the Food Bank is affiliated with America’s Second Harvest, a domestic hunger relief organization, which uses more than 200 food banks to help feed hungry Americans. Second Harvest annually distributes a total of 1.4 billion pounds of food to 26 million hungry children.

While America’s Second Harvest’s goal is to end hungerin America, the South Plains Food Bank is among the Texas food banks who are fighting hunger in the state. In Texas, the poverty rate was 2.3 percent higher than the national average in 1998. Through help from most major Texas cities, the fight against hunger grows stronger each year.