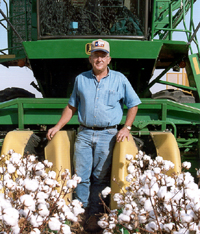 To say 2001 had its twists and turns would be an obvious understatement. A global oversupply of cotton, historically low prices and the free fall of the U.S. textile industry plagued the cotton world in 2001. For cotton producers, the volatility and uncertainty continues into the new year as 2002 begins without a farm bill in place.

In 2001, cotton prices reached lows not seen since the mid 1980s, and USDA may have dampened farmers’ hopes for considerably higher 2001-crop cotton prices as the department projected huge U.S. and world cotton production in its December supply/demand report. In the final month of the calendar year, USDA pegged the 2001-02 U.S. cotton crop at 20.06 million bales, 17 percent larger than the previous year. In addition, world production was estimated at 96.0 million bales with ending stocks of 43.5 million bales.

When every penny counts, producers no doubt have learned they must make informed decisions regarding their cotton crops. Everything from a producer’s marketing option down to the choice of seed planted can affect the bottom line. In fact, many producers find that selecting cotton seed to result in the greatest quality of cotton is of the utmost importance in a year when cotton prices have fallen below the loan rate.

Paul Kitchens, a cotton farmer near Slaton, Texas, produced more than three bales per acre on a portion of his land. “By closely managing my input costs, spending as much as I could afford on drip irrigation and carefully choosing a good variety of cotton seed, I was able to get great yields this year,” Kitchens explained.

“The Fibermax 958 I planted this year boosted my cotton grades to the top of the loan charts and raised my yields which helped compensate for incredibly low cotton prices,” he added.

Because cotton prices are at an all-time low, producers who market their own cotton must obtain as much information as possible and study the market closely for the most opportune time to sell their cotton.

“Cotton prices probably will not rise substantially any time soon because the world market is being flooded with an oversupply of cotton,” said David Stanford, PCCA’s vice president of marketing. “New York futures prices may move up; however, the adjusted world price likely will follow, and the producer option payment (POP) will decrease. Therefore, the equity value of the producer’s cotton actually stays the same,” he explained.

The Adjusted World Price (AWP) and the Loan Deficiency Payment rate remain at a fixed value for one week at a time, from 5:00 p.m. Thursday through 5:00 p.m. the following Thursday. By monitoring the week-to-date values, producers can gauge whether it would benefit them to sell their crop or wait for a better opportunity.

Gathering market data also is important to producers as they determine the “right” time to sell their cotton. Cotton Market Weekly, a PCCA publication, provides up-to-date information concerning the cotton market. The updated column is available on the coop’s website (www.pcca.com) each Friday afternoon.

“Cotton producers must monitor New York futures as well as world prices so they can react to favorable opportunities to market their cotton,” Stanford emphasized.

The November 2001 use rate, computed by the NCC after analysis of U.S. Census Bureau data, was below the expectations of most analysts who were looking for a figure around the 7.4 million-bale mark. In fact, the figure also was below NCC expectations, said one of the council’s economists.

“It’s a little lower than we expected, but the way things are going it’s not much of a surprise, unfortunately,” she explained. Textile imports, she said, are again a concern while a slumping U.S. economy and limited demand continue to weigh on the U.S. textile industry. Unfortunately, a resolution to the problems faced by the U.S. textile industry is not expected in the near term.

Looking to December, economists believe preliminary indications support thoughts that U.S. cotton consumption may slip even lower in the final month of the year. Burdened by debt and hit hard by imports, U.S. textile manufacturers say they are in their worst economic crisis since the Great Depression, according to the Wall Street Journal.

The American Textile Manufacturers Institute reports more than 100 plants have shut down or made substantial layoffs this year, up from 46 in 2000. Consequently, more than 60,000 textile workers have been laid off in the past 18 months, leaving only 448,700 “textile mill products” workers nationwide, the lowest total since the government began tracking job trends in 1939.

“U.S. textile manufacturers will continue to struggle and the workers at those plants will fear for their jobs as long as cheap imports continue to flood the market and sales of U.S. textile products remain skittish,” one analyst said.

Weak consumer confidence, slumping demand, and recession in the overall economy resulted in a continuance of ongoing price pressures at retail, according to the Labor Department’s Consumer Price Index. After two months of price increases, the Index revealed that retail prices for all apparel dropped 0.9 percent in November, the largest November decline since 1940.

Even in the face of weak demand, apparel and textile imports rose 2.7 percent in October compared to a year ago, surprising many analysts. It was the third highest volume month on record. The scenario suggests imports may have been taking more market share from domestic producers, analysts pointed out. Imports were up from virtually every Asian country; however, China led with an 11 percent increase.

In other news, cotton has regained some of the market share lost to man-made fibers earlier in 2001, according to statistics compiled by the Fiber Economics Bureau. In September 2001, cotton claimed a 32.3 percent share of U.S. mill fiber consumption – one of the strongest showings in more than a year.

At the same time, however, overall fiber consumption has fallen in 2001; thus, cotton has been able to gain share in a down market. Presumably, lower cotton prices and higher man-made fiber prices, particularly for polyester, have had a role in the recent resurgence of cotton in terms of market share. Although September marked a large consumption month for cotton versus other fibers, in absolute terms, cotton consumption has yet to turn around.

Meanwhile, with the beginning of the new year, production financing for next season may be the primary concern on the minds of most growers. Before Christmas, the Senate failed in its third attempt to pass farm bill legislation that would have helped clear the way for lenders and producers to arrange financing for the 2002 planting season.

“There has not been a time since the Great Depression when American agriculture was under greater economic stress and in greater need for new farm policy that provides a better income safety net while facilitating international competitiveness,” NCC Chairman James E. Echols stated.

For many farmers in the United States, there was a great deal of enthusiasm and interest in the development of a new farm bill. Despite very different versions of the new farm bill being propagated by both the House Agriculture Committee and the Senate Agriculture, Nutrition and Forestry Committee, there was a broad degree of optimism by most associated with the ag community that a substantial piece of legislation would be enacted into law before the end of the year and before the start of the next planting season.

Blame it on political positioning and terrorists acts or on regional issues versus national priorities, but for whatever the reason, the year came to a close without a new farm bill in place. However, congressional leaders indicated that the farm bill could be brought up again when Congress returns from its Christmas recess on Jan. 23.

Despite monumental uncertainties facing the cotton industry in 2002, many in the industry still look forward to the upcoming year with optimism and determination. Paul Kitchens might well have spoken for the entire industry when he said, “The last few years certainly have been challenging, but I learned a lot about cutting the right corners to try to make a profit. That knowledge will help me in the upcoming year as well.”