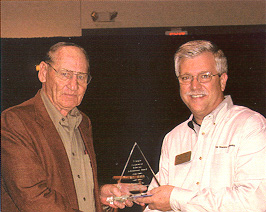 L-R: R.C. Hall and John Berg, president and CEO of the Triangle Companies.

Hall has served cooperatives in many ways. A native of Snyder, Okla., he attended Oklahoma State University before serving in World War II. When he returned home, he began farming and then began his professional coop career in 1955 as assistant manager of the Farmers Coop Association of Snyder.

In 1958, Hall was promoted to manager, and that summer’s harvest put him in the limelight when his gin received more grain than it could store. Hall was forced to store the grain in the streets of Snyder, and the event was featured in the Saturday Evening Post. Shortly after that summer, more storage was obtained, a modern gin was built and assets of the coop doubled.

Hall served the Farmers Coop Association of Snyder for 16 years and was the secretary for the Cooperative Ginners Association of Oklahoma for one year. In 1971, Hall went to work for OCCA in Altus, and he retired 21 years later.Then president of PCCA, C.L. Boggs attributed much of OCCA’s growth to Hall’s leadership and guidance.

“Cooperatives are a way of life for me.”R.C. Hall

“R.C. Hall played a major roll in the success of OCCA,” Boggs once said. “It was R.C. that first approached PCCA in 1960 regarding a possible merger of the two cooperatives in order to ensure a cooperative warehousing operation in Southwest Oklahoma.”

Hall is very proud of his work with PCCA and is greatly honored to have received the lifetime achievement award from Triangle.

“I spent 21 years working with PCCA, and those were 21 really great years,” he said. “Cooperatives are a way of life for me, and I was very appreciative of the award. It was a complete surprise. We have made so many good friends in the 37 years in the coop system, and it just brought back some great memories.”