A Career of Cooperatives

Looking back on his nearly 50-year c 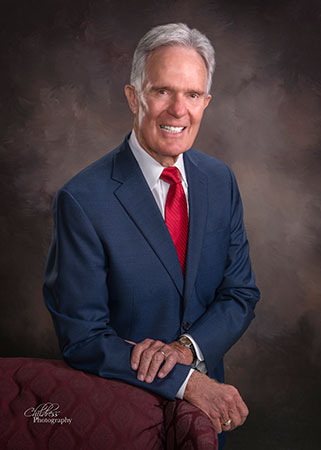 areer, Gail Kring said his favorite thing was learning and realizing the true value of the cooperative system. “When you first start working here, you do not realize what the cooperative system is,” Kring said. “You are just young, and you are doing a job working for a coop. Everybody says, well what is a coop? It is a business owned and operated by another business, but then you begin to realize that the coop is an extension of the individual producer to move his business further up the marketing chain and into the marketplace. With the coop gin, the coop compress, PCCA and then the oil mill, in no particular order, it allows the farmer to extend his operation and take profits from those areas. It took a while, but the fun part was realizing how the system works and really understanding it.”

Kring retired from his position as President and CEO of PYCO Industries, Inc., this past September. He began his career in the cooperative system while attending Texas Tech University when he got a job working part-time at the oil mill running the scales.

“This was in 1961, and the beautiful part about the job was they would allow me to study if things got slow,” Kring said. “During the fall, I would work seven days a week going to school during the day and then working at night, but I could also study at night which was really beneficial to me.”

When Kring graduated from Texas Tech with his degree in business and a minor in industrial engineering, he was offered a full-time accounting position at the mill. Later, he became the personnel manager where he ran the safety programs. At one point, he even earned his insurance license and handled the mill’s cooperative insurance program.

Following that, he was put on the road traveling where he mapped out the mill’s territory throughout Nebraska, Colorado, New Mexico, Texas, and Oklahoma. After three or four years on the road, he was given the opportunity to be the gin manager at Lockney Coop. He was there for five years managing the cotton gin, grain elevator and feed yard. When Wayne Martin became the manager in 1984, Kring was asked to come back to PYCO as the assistant vice president. When Martin retired in 2002, Kring became president and held the position until his retirement.

In his retirement, Kring plans to spend time with his four children, Karen, Scott, Tommy and Amy along with his seven grandchildren. He and his wife, Mary Ann, are planning to do some traveling and remodel their home. They also will continue to stay active in their church.

Over the course of his career at PYCO, Kring encountered his fair share of challenges. However, the one that stood out from the rest was when the dairy industry began moving into the High Plains of Texas in 2002. The dairies use whole cottonseed in their operations. Kring said back then, the oil mill could not compete with the dairies because they were paying more for the whole cottonseed than the mill could. At that particular time, in order to remain a member of the oil mill, a cooperative gin was required to deliver 75 percent of its cottonseed to the mill. Kring said this was not working because the independent gins could go out there and get the high dairy prices which would put cooperative members at a disadvantage.

“The board made the decision to put in the refinery to make refined oil so we could get into those markets and extend our arm out there,” Kring said. “When we put that refinery in, all the other mills used to make fun of us, and we struggled at first. Now, everyone wishes they had a refinery, but it is too expensive to put one in now. But our board was forward thinking and put us into the refined oil business, and it has made the producers on the High Plains an awful lot of money.”

Throughout his career, Kring said a lot of things have changed within agriculture and the cotton industry. One major change he witnessed has been the improvement in cotton varieties.

“The yields from cotton varieties are so much better than they were when I first started,” Kring said. “We have varieties now, under proper growing conditions, that can just produce a lot of cotton which wasn’t possible, but through breeding and genetics, everything has just come so far. This in turn has helped us with increased volume of cottonseed. It is a win-win for the producer,the compress, bales for PCCA to sell and for cottonseed.”

Another shocking change he has seen in recent years is the decline of the cottonseed crushing industry. He said with the low price of cotton, many areas in the United States where there were previously oil mills, no longer have mills.

Kring said any business is based on relationships, and it is the relationships with the gin managers and the employees at the mill that he will miss the most.

“I was in charge of actually running the mill operations, and it is the camaraderie you develop with the young men and women that work here that makes it such a joy,” Kring said. “If you really take an interest in them, you find out about their lives, their children and families. You see their children and families grow and mature. So the thing I am going to miss most is those relationships. The gin managers are good guys and even though they fuss at you sometimes, they are friends. The worries, the battles, I will not miss that, but I will miss the people.”

“As you know, here on the High Plains of Texas is one of the greatest cooperative areas in the United States. You have the farmer, the coop cotton gins, then it goes on through the three regionals. I think the difficulty today is the new farmers coming along, a new generation of farmers, do not realize and appreciate the value of the cooperative system and how hard their grandfathers and fathers fought to get it going.” Looking back at the history of the oil mill, the mill began in 1936 despite opposition from others in the cotton industry.

“The independents fought it very hard,” Kring said. “The other independent oil mills fought it. The banks fought it. They even tried to go through the federal government to fight it. They just did not want the cooperative to gain a foothold, but it finally did, and it has been a great system.” Kring said, historically, the oil mill came first, and it helped organize the compress and PCCA.

“I wouldn’t say the oil mill was the catalyst,” Kring said, “but they were kind of the base to where these others came and they were interested in moving those things forward and they helped when they could. So, we have been cooperating for years, and that needs to continue.”

In the past, the three regional cooperatives have put money back into the farmers’ pockets. Kring said it has been dependable, steady money throughout the years, and it is important that the three work together for the good of the farmers.