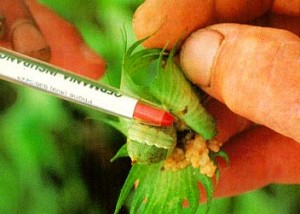 Is there a new weapon to combat some of the most damaging pests known to cotton? Some producers seem to think so.

The 1996 season marked the first year Bt cotton was sold and grown commercially. Bt cotton is a genetically improved type of seed variety that is already equipped with a gene effective against the tobacco budworm, the cotton bollworm and the pink bollworm. All are members of the lepidopteran group of insects, more commonly known as caterpillars.

This gene is called the Bollgard gene, exclusively from Monsanto. Bollgard was developed using plant biotechnology to extract a protein from a group of natural soil bacteria called Bacillus thuringiensis, or Bt.

When certain caterpillars eat any part of a genetically modified plant, the Bt protein shuts down their digestive systems. The insect stops eating immediately and dies within days.

According to researchers, the Bollgard gene protects the plant throughout the growing season since it is in the cotton plant. It also helps reduce the impact of weather on insect management programs because, unlike sprays, the gene does not break down in sunlight or wash off in rain.

Most Bt cotton planted in Texas was in the Brazos River bottomlands, near College Station and further south where worm problems are traditionally greater than other areas in the state. During the summer, entomologists said there was an unusually high level of bollworm infestation that required the application of pyrethroids. 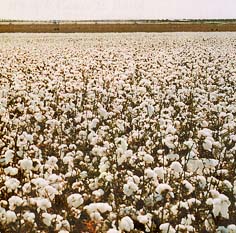 Monsanto has heard some complaints from growers in other states who understood they would not have to spray at all. However, infestations were so high in some areas, insecticide application was the only recourse.

Data from North Carolina State University indicates when bollworm infestations are very high, bollworm damage reduced yields of Bt cotton by about 20 percent. Yields of non-sprayed, conventional cotton were reduced by 70 to 90 percent. This means that with Bt cotton, 70 to 90 percent of the insects are killed.

“We had a bad spell between June and July,” says PCCA Director Curtis Jensen of Danevang, TX. “I don’t know if we really needed to spray, but we sprayed one time just for security. I am very pleased with the Bt cotton,” adds Jensen, “and I plan to plant it again next year.”

Before Bt cotton was sold commercially, universities, seed companies and Monsanto conducted extensive field tests across the Cotton Belt during the past six years. Results of these experiments have concluded that varieties containing the Bollgard gene will provide at least the same yield and fiber characteristics growers expect from varieties they currently use, if not better.

According to Monsanto, experimental plots in every state planted with cotton containing the Bollgard gene showed levels of insect protection equal to or better than conventionally treated cotton.

For the 1996 growing season, Delta and Pine Land was the only seed company that sold cotton seed containing the Bollgard gene commercially.

“Monsanto was looking for a leading cotton company to sell the seed,” says Richard Percival, Delta and Pine Land district sales manager, “and they came to us. We were very pleased with the results we saw.”

Delta and Pine Land reports that all 24 of its experimental locations in 1994 showed favorable results. According to yield trials, the plots planted with Bt cotton had yields averaging 97 pounds of lint per acre more than conventional plots treated at grower and consultant recommendations.

“In the areas I have visited, early yields of Bt cotton are much higher than those of non-Bt,” says Percival. “Everyone seems to be pleased with the results, even if they had to spray once.”

“I am real pleased with Bt,” says Rob Kainer, El Campo, TX. “My Bt cotton nearly doubled in yield, whereas a lot of the other cotton fell out. Bt might be all that I plant next year.”

As part of the Bt cotton insect management program, Monsanto required producers to obtain a license to grow the cotton. The cost of the seed was $32 per acre that the producer intended to plant, and some growers in the nation felt the price was too high.

“I hope they go down on the price some,” says Kainer, “but I will still plant Bt if they don’t.” Prices for 1997 are set to be released in December of this year.

In order to receive a license, producers had to attend a grower information and training meeting conducted by Monsanto prior to the 1996 growing season. The meeting outlined certain guidelines that each producer was required to follow.

“The Bollgard gene was put ino insect management programs from the begining,” says Barton. “Without guidelines, the seed will become ineffective. one of our main concerns is the insect forming resistance. For that reason, we require producers to take preventive measures.”

To ensure that Bollgard cotton remains effective for years to come, all producers were required to plant “refuge” acreage, or areas of unprotected host crop. Producers were given two options. The first option required 25 acres of refuge that could be sprayed with products other than foliar Bt for every 100 acres ofBt cotton. option two allowed only four acres of refuge that could not be sprayed at all for every 100 acres of bt cotton.

According to Monsanto entomologists, a refuge provides an alternate food source where insects not exposed to the Bt gene can flourish. When these insects mate with the few insects that may emerge from Bollgard fields, their susceptible genes dominate any resistant genes in the overall insect population, thus preventing the formulation the formation of resistance to the Bt gene.

“We must take measures to prevent insect resistance,” says Barton. “This is the reason so many products on the market fail.”

In addition to the required refuge acreage, growers had to agree not to catch the seed containing the Bollgard gene and replant it in their field the following year. This stipulation is a result of the patent monsanto has on the gene.

“Producers are not allows to catch the seed and replant it in the field after it drops because it is patented by Monsanto,” says Percival.

Monsanto also encouraged producers to continue scounting. However, there is a change in exactly what to look for while scounting. Egg counts can no longer serve as the primary threshold for spray decisions. According to researchers, newly hatched larvae must be allowed to ingest a small amount of the plant for the Bollgard gene to work. Scouts must look for the larvae to gain an accurate measure of the insect population, as well as understand that the presence of larvae does not mean the producer should spray.

“We noticed that when the worm hatched onto the plant,” says jensen, “it didn’t eat much, but kind of disappeared from the cotton without doing much damage.”

“This year, there were two varieties of Bt cotton,” says Barton, “and next year, there will be about 10 or 12 varieties available.” He adds that research is an ongoing process with the bollgard cotton.

“I think new varieties of cotton containing the Bollgard gene will be the big thing,” says Kainer. “But until then, I am satisfied with the Bt cotton.”

“I think this is going to be the thing for Texas and Oklahoma cotton farmers,” says Jensen, “as well as anyone else who has bollworm problems.”