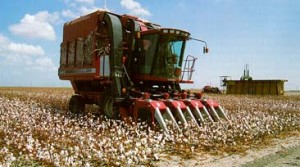 Nothing signifies a consistent winner like proven performance, and South Texas cotton growers in increasing numbers are recognizing the winning traits of Plains Cotton Cooperative Association’s (PCCA) South Texas marketing pool. The proof is on the bottom line.

Growth of the South Texas pool in recent years is well documented. Acres signed into the 1995-crop pool represented a 60 percent increase over the 1992- crop pool and a 51 percent increase over the 1994-crop. Actual bales delivered to the pool also increased dramatically during that period. Specifically, bales delivered to the 1995-crop South Texas pool increased more than 50 percent compared to the 1994 crop despite the horrible disaster suffered in 1995 by Lower Rio Grande Valley (LRGV) producers.

That year, early adverse weather and an extreme outbreak of beet armyworms devastated the cotton crop there. Normal yields of 580 pounds per acre were reduced to 80 pounds by the combination of bad weather and insects. Obviously, exceptional yields and increased acres signed into the pool in the Coastal Bend and Upper Coastal Bend of Texas more than offset the losses incurred farther south.

The 1996 crop-year was a different story altogether as a combination of factors affected the pool size, and insects were not the culprit. Despite an increase in the number of farms signed into the South Texas pool in 1996 versus 1995, cotton production actually declined approximately 50 percent. The reasons were both economical and weather-related.

The new farm bill that became effective with the 1996 crop offered perhaps the greatest planting flexibility ever experienced by producers. It came at a time when declining cotton prices and strong corn and sorghum prices tempted many producers to increase acreage devoted to grain on those farms signed into the pool the previous November.

That was followed by one of the worst droughts since the dust bowl days of the 1930s, especially in the Coastal Bend area around Corpus Christi and in the LRGV. The combination of both factors was significant as related to cotton production, but it in no way reflected the pool’s popularity. The bottom line is what counts.

“People don’t have to worry because the pool almost always beats non- pool prices,” notes Laffere who has served as the committee’s chairman since the South Texas pool’s inception beginning with the 1988 crop. The veteran farmer also serves on the Board of Directors of VALCO in Harlingen and has served on the Winter Garden Coop Board since 1952. “We also like the pool because it absorbs first month’s storage, interest and receiving charges which is a significant advantage.”

Although economic conditions will help dictate the number of acres planted to cotton in 1997 and beyond, there is no doubt PCCA’s South Texas pool will continue to attract its share of production. Winter Garden Coop Manager Ed Atchison makes a strong case for cotton. “We need a good crop rotation program, especially in our area, to control grassy weeds and plant diseases,” Atchison states. “That’s why I believe our farmers will plant some cotton each year regardless of corn and sorghum prices.” Laffere, likewise, remains optimistic, especially if the boll weevil is erradicated.

“Cotton here is very susceptible to the weather and insects,” he explains. “Bugs here can eat up a cotton crop in three weeks time. Thus, if we can erradicate the weevil in the Winter Garden area, we won’t have to spray so early and often, and our insecticide costs will decline.” And, if production costs can be cut, corn and sorghum prices may not have as much of an impact on acreage. Two other factors, geography and early harvest weigh heavily in the pool’s favor.

“Traditionally, the South Texas crop is the first harvested in the U.S. each year,” states David Stanford, PCCA’s vice president of marketing and the man directly responsible for selling the South Texas pool. “In the past, there have been many years when U.S. mills were running out of cotton by August and September, therefore, we’ve had a ready market,” he says. “In recent years, the emerging market in Mexico has created other opportunities to sell the crop due to its geographic proximity to Mexican mills. Both factors have played key roles in the South Texas pool’s success.”

As economic conditions, the weather and insect levels change, one important element remains the same: Producers can count on the South Texas pool’s proven performance and its impact on their bottom lines. It is a valuable ally in difficult times.