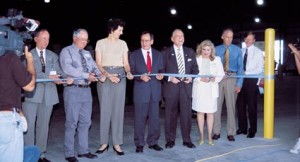 Gulf Compress Board President Allen May (second from left) and Texas Agriculture Commissioner Susan Combs (third from left) are joined by other dignitaries at the ribbon cutting.

Calling it a “gateway for Texas cotton to go to the world,” Texas Agriculture Commissioner Susan Combs joined almost 300 other dignitaries and cotton producers for the official ribbon cutting of Gulf Compress’ new La Quinta Division near Corpus Christi on Sept. 16, 2004. The event was held exactly one year after ground was broken for the state-of- the-art facility.

“This facility means cotton producers are investing in their future,” Combs told the audience. The cotton warehouse project is the anchor for the Port of Corpus Christi’s massive $400 million La Quinta International Trade Gateway, a container terminal facility being built on 1,100 acres of port-owned land on the north side of Corpus Christi Bay.

“This facility means cotton producers are investing in their future,” Combs said.