“This is a huge leap for the cotton producers in our area, and it will put much more money in their pockets,” Weatherford exclaims. “Cotton producers in other parts of the Southwest also could benefit from this project once the container terminal becomes a reality,” he adds.

The cotton warehouse project, scheduled for completion in time to receive the 2004 cotton crop, will be the anchor for the Port of Corpus Christi’s massive $400 million La Quinta International Trade Gateway. The entire container terminal facility will be constructed on 1,100 acres of port-owned land on the north side of Corpus Christi Bay in San Patricio County. 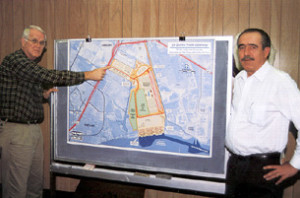 “The Port of Corpus Christi was built in the 1920s to serve the Coastal Bend cotton industry,” Weatherford says. “When the La Quinta project was approved, the Port Authority invited Gulf Compress to be the first tenant. I guess you could say they wanted to get back to their roots.” The timing could not have been better for Gulf Compress.

Expanded cotton production throughout South Texas in recent years had forced the compress to lease additional storage facilities. One of those, the former Corpus Christi Public Compress, is scheduled for demolition in 2004 to make room for a new minor league baseball stadium.

“Three of the buildings will contain 160,000 square feet each,” says Weatherford. “That’s enough area to store 32,000 bales of cotton in each warehouse. The fourth building will cover 75,000 square feet and will house a shop, office and load-out facility.” Financing for Gulf Compress’ $13.5 million construction cost is being provided by CoBank.

“This agreement is very unique, and all parties involved had to overcome a lot of obstacles,” explains Lynn Scherler, relationship manager for CoBank. “It was a team effort with a lot of people pulling in the right direction because everyone wanted it to happen,” Scherler continues. David Fields, assistant manager at Gulf Compress, agrees. 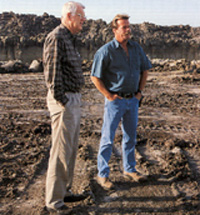 “It was a very complicated negotiation process,” says Fields, “but CoBank’s resources and Lynn Scherler’s tireless assistance helped us put together a deal that benefits all parties. In fact, the agreement will result in savings of as much as $10 million over the next 30 years,” Fields estimates. Another factor influencing Gulf’s decision to build the new warehouses is the increasing level of cotton exports shipped by Gulf Compress.

“Last year, 89 percent of our cotton was exported,” explains Weatherford, “and we expect this trend to continue. Previously, our normal level of exports was about 50 percent.” Currently, cotton sold to foreign customers must be hauled from Gulf Compress to the Port of Houston to be loaded onto cargo ships.

“It costs $450 to send a container full of 90 bales of cotton to Houston,” Weatherford continues. “Considering the fact that Gulf Compress handles up to 3,000 containers annually, our new facility at La Quinta will save about $1.35 million a year in transportation costs alone when the container terminal is ready.”

Plans call for La Quinta to be a state-of-the-art container facility to handle significant amounts of cargo to and from key market areas including Latin America, the Pacific Southwest, Asia, and Central and Southwest Texas. When completed, it will include a marine terminal with storage areas, a wharf capable of handling three container ships simultaneously, nine cranes to load and unload cargo, a rail terminal, and dredge material placement areas.

“Gulf Compress will act as a catalyst for expanded economic development at the terminal,” Port Commission Chairman Ruben Bonilla told the local newspaper on May 13 following approval of the agreement.

Ultimately, the La Quinta International Trade Gateway could become an important distribution center for PCCA members’ cotton that is sold to global markets, and Gulf Compress will be positioned to play a pivotal role.