“The fabric of Texas history contains many threads – political, social, military and economic – but none so basic, none so enduring as the story of the land itself. Volumes have been written about pioneers who pushed beyond the existing frontier to lay claim to the vast wilderness that was Texas. Legends surround these lone adventurers. The Texas Heritage Hall of Honor recognizes men and women who made their marks as farmers, ranchers, drovers, inventors, innovators, educators, authors, legislators and preservationists. Their achievements span 160 years – reaching back to the birth of the Texas Republic and extending out into a limitless future.”

Ask anyone to describe S. M. True Jr. of Plainview, Texas, and words like gentleman, statesman, visionary or leader may be spoken.

“He is the consummate gentleman and a leader with great knowledge of agriculture,” says Marcus Hill, president of Agricultural Workers Mutual Auto Insurance Company and a longtime friend of True. Yet, the one title almost everyone who knows him will agree on is “Mr. Texas Agriculture.”

The title was earned from a lifetime of devotion to the state’s farming and ranching industries, and True’s untiring dedication was recognized in late September when he was inducted into the Texas Heritage Hall of Honor at the State Fair of Texas in Dallas. There, he joined such legends as Charles Goodnight, C. C. Slaughter, Ann Burnett Tandy, Dolph Briscoe Jr., Elmer Kelton, and others. True was nominated by Texas Farm Bureau (TFB), an organization he served as president for 11 years.

“I don’t know how to express my feelings about this honor because I don’t feel deserving,” True says. Anyone who knows S. M. True would disagree, according to the induction ceremony program prepared by State Fair officials.

“No one would argue with the induction of S. M. True Jr. to the Texas Heritage Hall of Honor,” the program noted. “The Knox County native was elected president of the Texas Farm Bureau for ten consecutive terms and is known in some circles as ‘Mr. Texas Agriculture.'” True’s first term at the helm of Texas Farm Bureau began in December 1982. Previously, he served on the organization’s board of directors for seven years.

The program’s biography of him continued, “True devoted his life to promoting Texas farming and ranching. Active in state and national affairs, he has served on every kind of committee and group tackling issues ranging from cotton, the beef industry, immigration and agricultural development, farm workers’ insurance, Texas family farms and ranches, and the U.S.-Mexico Free Trade Agreement.”

Before he began his career in agriculture, True’s education was interrupted by World War II like so many of his generation. While in service to his country, he flew night missions in an F6F Hellcat launched from an aircraft carrier in the Pacific. Although he never saw combat, True and his squadron had been briefed for a mission against Wake Island moments before news came that Japan had surrendered. 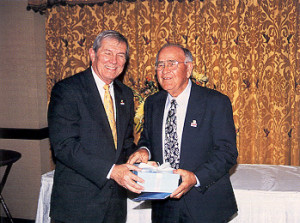 True returned to the family farm in Hale County on the Texas South Plains and got married. When asked recently how long he and Anna Jean have been married, True turned his gaze toward her and with a beaming smile proudly said, “56 years,” then paused momentarily, no doubt remembering the many wonderful memories they have shared.

Among their memories is True’s first cotton crop in the late 1940s that he sold for 16 cents per pound. He describes it with a sense of irony.

“My dad moved our family from Knox County to Plainview in 1933 to get away from cotton,” True recalls with a chuckle. “He used to say, ‘grow grain crops, son. You’ll make just as much money as cotton without all the hard work and heartache.'”

True was not content just to raise cotton. He saw a need to promote the fiber and was one of the first producers to support efforts that led to the creation of Cotton Incorporated.

“I traveled the dirt roads of West Texas asking farmers to voluntarily give a dollar a bale to help fund the cotton promotion program in those early years,” True explains. Later, he would serve on the Cotton Board for 21 years.

“We met at the No-Name Café here in Plainview to get NGSP started,” True says. “Then, Hale County Extension Agent Ollie Liner and I interviewed and hired the organization’s first executive director, Elbert Harp.” True also served on the National Meat Board.

Other 2002 inductees of the Texas Heritage Hall of Honor were: Ben H. Carpenter, the late Clarence Scharbauer Sr., the late Roy B. Davis, and retired U.S. Congressman Eligio “Kika” de la Garza (See related story at right). For True and de la Garza, the induction ceremony was a reunion of sorts.

As the inductees, family members, friends and guests gathered on Sept. 27 at the Adolphus Hotel in Dallas for the ceremony, from across the banquet room True and de la Garza saw each other for the first time that morning. What followed was akin to long-lost brothers reuniting after many years of separation.

“It was wonderful to see Kika again,” True says. “We hit it off the first time I met him on one of my trips to Washington. He always wanted me to stop and see him when I was in town.”

These days, the 79-year-old True spends less time traveling on behalf of agriculture and more time in a tractor pulling a boll buggy during cotton harvest on the family farm. After all, he spent decades blazing trails for the industry and paved the way for younger leaders to come to the forefront. Texas agriculture forever will be indebted to S. M. True Jr.