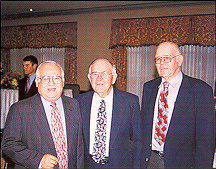 Along with S. M. True Jr., the State Fair of Texas inducted into the Texas Heritage Hall of Honor two other leaders whose names are synonymous with agriculture: Retired U.S. Congressman Eligio “Kika” de la Garza and the late Roy B. Davis.

De la Garza enjoyed a lengthy career as an accomplished public servant. He served six consecutive terms in the Texas Legislature before being elected U.S. representative from the state’s 15thcongressional district. He remained in that post from 1964 until his retirement in 1998.

The South Texas native served as chairman of the House Committee on Agriculture from 1981 to 1994, the first Hispanic to chair a major congressional committee. De la Garza also was the first member of Congress to receive the Order of the Aztec Eagle, Mexico’s highest honor bestowed on foreigners, and USDA’s Subtropical Research Center at Weslaco, Texas, bears his name.

“Kika de la Garza, statesman and native son, will forever be remembered as a friend and steward of agriculture,” the induction ceremony program noted.

In recognizing Roy B. Davis, the State Fair of Texas said, “Sometimes it’s impossible to separate the person from the accomplishment. Such is the case with Roy B. Davis whose name is interchangeable with cotton. Davis envisioned the Southern Plains as the cotton capital of the world, a place where farmers could share the wealth.”

“A populist in the truest sense of the word, every mention of him includes words like good, modest, loving and humane,” the State Fair of Texas noted. “Not only was Mr. Roy kind and compassionate, his business acumen resulted in the development of a cotton cooperative system unequaled in the world.”