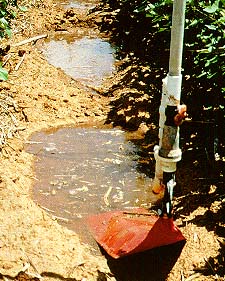 When the Ogallala Aquifer is mentioned, many people often recall predictions that it would soon run out of water. That used to be the case, because recent conservation efforts of the major water-user groups across the High Plains have reduced the rate of depletion and extended the aquifer’s life.

The High Plains Underground Water Conservation District No. 1 says the aquifer depletion rate is not as rapid as it once was. From 1986 to 1996, the average annual change in water levels was 0.77 of a foot within the Water District’s 6.7 million acre service area. Yet, the drought which has occurred in the region since mid-1992 has resulted in the need to pump more water to make up for the precipitation deficit. This has increased the rate of water level decline to about two feet per year since the drought began. However, since June 1996, much of the region has received average or above-average precipitation.

“This is good news for residents of the High Plains Water District service area,” says A. Wayne Wyatt, High Plains district manager. “We hope the drought has ended.”

The status of the Ogallala has changed tremendously over the last century. The arrival of pioneering families that developed the agricultural industry known today changed the natural balance of the aquifer as more water was drawn than was replaced.

This trend continued through the 1950s and 1960s when main-stream irrigation had its greatest effects on the levels of the aquifer. Finally, a reduction in water extraction was seen in the 1980s due to an increase in average annual precipitation, conservation practices and a decrease in irrigated acreage. 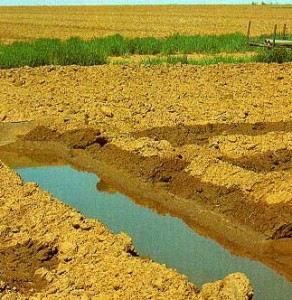 Open and unlined irrigation ditches are the second major cause of agricultural water loss on the Texas High Plains.

By the 1990s, declines seemed to be leveling off. In fact, the average water level declines have reached a minimal amount; a direct result of the conservation and management practices of area residents.

There have been several factors that have contributed to the reduced rate of decline in ground water levels. One of those is attributed to the greater irrigation application efficiency utilized by producers in the area.

Many farmers in the High Plains have converted to the center pivot sprinkler systems. Low Energy Precision Application (LEPA) center pivots are one of the most efficient irrigation methods available today because they offer both high water application efficiency and low operating pressure.

LEPA irrigation reduces evaporation and percolation losses by applying ground water at low pressure directly into the furrow. As a result, irrigation application efficiencies can be improved from 60 percent with furrow irrigation to 95 percent with LEPA. The improved efficiency provides more available water for crop use.

“We are definitely in support of the center pivot sprinkler systems,” says Carmon McCain, High Plains Water District information/education director, “because they apply water more efficiently to the crop.” As of the summer, 1995, 9,118 center pivot sprinkler systems were in operation within the 15-county High Plains Water District service area, representing an investment of $275 million by area irrigators, McCain notes.

“The number of pivots being used has more than doubled in the last few years,” adds McCain. In 1990, there were only 4,474 center pivot systems operating within the district.

However, management practices remain an important issue. Although the center pivot is more effective on the overall watering of the crop, there are problems with attempting to irrigate field corners. This is very labor intensive because every row is a different length, requiring a different volume of water to maintain uniformity and ultimately wasting water. Research from Texas Tech University suggests the amount of water required to reach the corners compared to the pounds of lint produced there is not cost-effective.

According to the Water District, producers can combat this type of water loss either by installing an underground pipeline or by using PVC pipe or poly-pipe to convey water from the well to the field.

Also, legal issues involving the aquifer could be on the horizon. Cases involving the Edwards Aquifer have captured the interest of many individuals across the High Plains.

Numerous court cases have been brought to determine the constitutionality of the Act. In the most recent case concerning Medina County, it was decided by the Texas Supreme Court that the Edwards Aquifer Authority will exist. The court declared that the use of water runs with the land, not the landowner, which means the provisions of the Edwards Act do not constitute the taking of landowners’ rights.

Since the Supreme Court decision, an aquifer-wide cap system has been initiated on water withdrawals. The caps are allocated by a permit system based on each individual’s historical use of water. Water rationing also has been imposed on some cities in the Edwards Aquifer area.

“The High Plains Water District has been monitoring the Edwards situation from day one,”says McCain, “as well as trying to add our input. We hope precedence will not be set for the Ogallala because these are two different situations involving two different types of aquifers.”

“We ultimately want to look out for the needs and interests of the people in the High Plains,” adds McCain, “as well as protect their water rights.” PCCA member L.H. “Les” Laffere of Batesville, TX, is not as optimistic, having witnessed first-hand the fight over the Edwards Aquifer.

“We believe whatever happens to the Edwards Aquifer will set a precedent for the entire state,” Laffere says. “For the time-being, we’re fortunate here in the Winter Garden area because our water comes from the Carrizo Sands Aquifer, and no large cities depend on it. Thus, we temporarily have some advantage over our immediate neighbors to the North,” he cautions.

“The only way for the Ogallala water table to go is down because we are still using water,” adds Lyle. “Basically, we are now selling our water at a higher price because we are producing more crops. This is a way to look at it, because we put the water in the crop that we sell.”

To help ensure a future for the High Plains Aquifer, development of the High Plains Ogallala Water Management Plan began in 1994. The plan is being written as a means to “develop, promote, and implement water conservation, augmentation, and management strategies to provide adequate water supplies for the Ogallala region of the Texas High Plains and to stabilize or improve the economic and social viability and longevity of the region through these activities.”

Six major tasks have been designated: identifying water demands; detailing water supplies; matching water demands with supplies and identifying problem areas; looking at different organizations dealing with water, as well as legal considerations; and pulling together information that can be utilized over the next 50 years to conserve water.

“We are really breaking new ground,” says McCain, “because nobody has ever done an in-depth water management plan for this region of Texas. It addresses the specific needs of West Texas residents and will eventually be incorporated into the state Water Plan developed by the Texas Water Development Board in Austin.”

The Ogallala Water Management Plan has three tiers of management. There is a large planning group consisting of 150 members whose responsibility is to identify the needs of the area. The middle group or management team, consists of about 25 members whose responsibility is to develop work strategies and identify studies to address the needs recommended by the planning group. The executive committee is the third group, consisting of 11 members, and is responsible for implementing the strategies and studies.

“For some, the future is already here because some people are already having to deal with decreased water pumpage from their irrigation wells,” counters Lyle. “We still have a while with our water in the Ogallala, but the fact is, we will always be using water.” Since withdrawals will ultimately continue to exceed recharge and water levels will continue to decline, conservation practices and quality water use are essential to extending the useful life of the aquifer.