Annual Farm Show Offers Something for Everyone 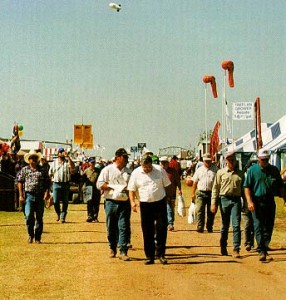 Crowds that attended the 1996 Texas Farmer Stockman show were able to travel back in time and journey into the future through the various exhibits and demonstrations that were on hand this year. People of all ages, those young and those young at heart, were able to witness the progress the agricultural industry has made in its pursuit of excellence and the perfect crop.

The largest outdoor demonstration show in the southwestern U.S. was held for the fourth consecutive year at the Lubbock City Farms, Oct. 8-10, in the heart one of the nation’s most productive farming areas- the High Plains. More than 250 exhibitors set up shop in an area spanning 800 acres with 54 acres of stationary exhibits appropriately named “tent city” for the large tents that housed them. Field demonstrations were held on 600 crop acres surrounding the exhibit area.

The show’s strong attendance made it clear to all those involved that the interest of the agricultural industry has not faltered. This year, the show’s attendance was estimated at a 25 percent increase compared to the last three years.

Monica Hightower, coordinator of the Texas Farmer Stockman Show, was pleased with the turnout and says the show’s attendance proves it remains a positive experience.

“We could not be more pleased with the turnout,” Hightower says. ” People are returning every year and bringing their family and friends. Word of mouth is a big factor with our attendance,” she says. “The crowds return for all different reasons. With so many areas of interest incorporated in the show, we can satisfy more of the people’s curiosities.” This year a wildlife section was added to the show, and next year officials say they are looking at adding a diary section and expanding the livestock division of the show. 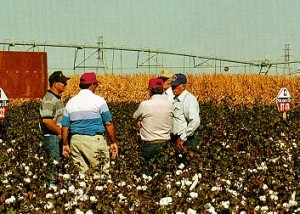 Field and variety demonstrations are an annual highlight at the Texas Farmer Stockman Show.

A Step Into The Past

Taking a stroll down memory lane was a popular activity for some that attended the show. Visitors could start with coffee and conversation prepared and delivered the original “cowboy way” over an open flame by a cowboy chef. The coffee was strong, and the conversation was stimulating, just like “the good ol’ days.”

The increased interest in antique farm equipment has prompted the return and growth of the antique tractor and engine exhibit. Everything from “Poppin Johnnies” to steam tractors to stationary engines were showcased this year. Visiting the site of the antique exhibit was a way to look back on the pages of history at the machines that have helped feed the nation for decades.

“Those tractors remind me of the heritage of farming in West Texas,” says Lance Keith, a New Home, TX, resident. “It reminds me of the stories my grandfather used to tell me about his early days of farming back in the 1940s. Those tractors are a piece of our past.”

To go where no man, or tractor, has ever gone before is the goal of many companies in the agricultural industry, and the Farmer Stockman Show was the place they could show just how far they have succeeded in making that dream come true.

A Journey Into The Future

The newest innovations and ideas for future agricultural technology were showcased both in stationary and field exhibits. Producers were able to compare equipment and performance from a variety of manufacturers. The versatility, precision and accuracy of today’s equipment is what makes it unique. Farming by the acre is almost a thing of the past because most farmers now can farm by the foot thanks to computers, satellites and microchips. The machinery available to producers is “smarter”and more powerful, so producers get the most from every input.

Some farmers have equipped their tractors with a Global Positioning System (GPS), a program originally developed by the military to navigate submarines. GPS uses 24 satellites orbiting 12,000 miles above the Earth’s surface to calculate a tractor’s exact position in the field.

Using the GPS locational device, farmers can harvest and obtain detailed digital maps of their fields plotting slopes, soil type, moisture, historical yield, and weed and insect problems. Information is collected on portions of the field as small as 18 inches. Equipment then can be modified to match the specified field data which reduces waste and improves yields.

The computer systems help producers monitor and respond to weather variability on a day-to-day basis. Innovations such as solar powered weather stations also can be used to relay soil and atmospheric information.

“The new equipment and instruments are always the favorite exhibits,” Hightower adds.

For the older farmers, some of the machinery is like a dream. Some just stand at the exhibits and shake their heads in amazement of the innovations. Most seem to agree the agricultural industry has taken off in new directions but has not lost sight of where it started.

The Farmer Stockman Show staff knows that only by recollecting and preserving the history of agriculture can we measure just how far we have come. The show’s organizers also realize that keeping producers informed and making them witnesses to the newest developments and innovations are the only ways we will know how far we can go in the search of perfecting an already successful way of life.

The 1997 Farmer Stockman Show planning is already under way. The showdate is set for Oct. 7-9. once again the show will be held at the Lubbock City Farms located 1.5 miles east of Loop 289 on East 50th Street (FM 835). Admission will be $5 per person, and children, ages 18 and younger, are admitted free.