Hurricane Harvey – The Road to Recovery

August 25, 2017, likely will be immortalized as one of the most devastating days in U.S. natural-disaster history. Around ten that evening, category four Hurricane Harvey made landfall near Rockport, Texas, dumping roughly nine trillion gallons of water on Texas soil over the course of its week-long stay. According to The Weather Channel, Harvey’s eyewall wind speeds were 130 miles per hour when water met soil, making it one of the strongest storms since Hurricane Wilma hit South Florida in 2005, roughly 13 years prior.

In the wreckage of Harvey were homes, businesses, cities, families and tourist attractions, but among the top ranking in losses was agriculture. Texas A&M AgriLife Today reported on October 27, 2017 more than $200 million in crop and livestock losses, with cotton estimated at a loss of $100 million.

Even though eight months have come and gone since the storm faded, recovery efforts in the cotton industry are still continuing. The damage Harvey left behind in the matter of a week has taken much longer to repair, whether at the individual farmer or cooperative cotton gin levels.

“When you live on the coast you are going to have hurricanes,” Wyatt said. “Celia was the worst hurricane I recall ever going through. I was 12 years old, and it took the roof off of my house. You could see the sky when it was all said and done. Hurricane Allen was the first sizeable hurricane I went through as a gin manager. We were able to finish ginning what was left after that hurricane, and we have had some weather-related damage from hurricanes since then, but never from the wind like we had on this one.”

As Hurricane Harvey gathered power on its journey toward land, all eyes and ears, including Wyatt’s, were turned to weather news outlets to hear the latest.

“I was watching it constantly,” Wyatt said. “You know, I grew up in the Coastal Bend and I can remember when they [weather forecasters] would give a hundred-mile radius of where it might go in, and maybe they [the hurricanes] would hit in that radius and sometimes they didn’t. When it was going to hit, they had this one pin-pointed locked-in for 48 hours before it came ashore and didn’t hardly miss a minute.”

As weather predictions increased in accuracy as quickly as the storm increased in category, Wyatt began to ponder whether or not riding this storm out was a feasible option. Before leaving his hometown and the gin to the mercy of Harvey, Wyatt and his gin staff finished ginning the cotton that was left on the module feeder, picked up the place, shut the doors, said their prayers and went their separate ways. Following the advice of his next-door neighbors and snagging the last two hotel rooms in a small town in the Rio Grande Valley just in case, Wyatt and his family evacuated to Zapata, Texas, where they rode out the storm. 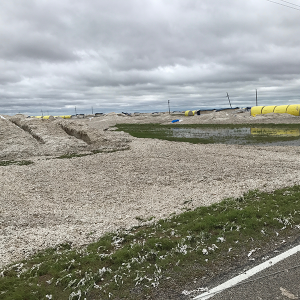 RETURNING AFTER THE EYE OF THE STORM

“We were gone overnight and I was back the next day,” Wyatt said. “I made contact with some folks in the area and found out that it was possible to get back to the gin, but there were spots with power lines down. We were without power for a couple of weeks, but as soon as I found out that I could get here, it took four-wheel-drive and driving through ditches and over power lines, but I made it back out to see.”

When Wyatt came upon his gin, tattered by the hurricane, he said the sight was almost unbearable.

“It was pretty sickening. It took me a while to realize that I wasn’t going to be able to put it back together,” Wyatt said. “It took several days for me to come to the realization that there was just too much damage. That was pretty hard. I have run a cotton gin my whole life and have never had anything that shut me down for a season. A typical breakdown might be an hour or two and a bad one might be 12 or 14 hours, but I have never had anything that I couldn’t fix and get back running.”

THE ROAD TO RECOVERY

Prior to Harvey’s unwelcome appearance in August 2017, the South Texas cotton production area was preparing to experience a record crop.

“The crop was too good to be true – it was way above and beyond anything we had ever averaged before,” Wyatt said. “I think the best we had ever averaged prior to that was ’91, my first year here. We had a 2.1 bale-per-acre average, and we haven’t done that since until this year, and last year we had a 1.75 average within the membership.”

Producers and cooperative cotton gins experienced loss in many forms and are still working to “get back to normal,” even eight months after Harvey. While many were covered with hurricane insurance, including Wyatt, there were some who weren’t.

“We also had hurricane coverage on the cotton itself,” he said. “That is where we took our biggest loss. We had a $7 million loss in cotton and had twice the damage of the closest gin to us.”

Wyatt said he is working to restore Bayside- Richardson to its former glory in the best way he knows how – one day at a time.

“One day at a time,” he said. “That was the only way I found to get through it. If you look at the thing in whole, it is way too overwhelming. It looks like an impossible task, so we just started one day at a time.”

Currently, Bayside-Richardson is on track to be open for the next ginning season. With a few construction tasks still on the docket, Wyatt’s team is pushing forward – full steam ahead.

“I told somebody, is there an option? Every time we have done reconstruction they ask if we are going to be ready in time and I say is it an option not to be? I have never even considered not being ready,” Wyatt said. “That is the same way I looked at this one. We are coming along very well. We are pleased with where we are and the whole picture as far as putting it back together and being ready, but if it was any different, if I was any further out, more people more hours. In the cotton business, not being ready for harvest season is not an option as far as I am concerned.”

Even though each individual, no matter their walk in life, had struggles to endure that resulted from Mother Nature’s unloading that was Hurricane Harvey, communities across South Texas, as well as cooperatives, came together to support one another.

“We are a fairly small town, small community, and they [farmers] probably spent the first six or eight weeks helping their neighbors clean up, going to the town square and volunteering, bringing their equipment into town and clearing the streets. They probably did more for others than they did for themselves in the first two months after the storm.”

Wyatt also received numerous calls from others offering their help in his cleanup efforts.

“I was kind of overwhelmed by the response I had, you know,” Wyatt said, “producers calling and asking ‘can we do anything? Can we bring hands and equipment? What can we do to help?’ We try to be pretty self-sufficient and we were well insured and we just kind of jumped on top of it. We haven’t slowed down. Like I told them, I said I am going to go at it like I am trying to gin tomorrow.”

As Bayside-Richardson was unable to gin cotton after Hurricane Harvey’s unwelcome visit, Wyatt said he had some local co-op friends who came together to get the remainder of his cotton ginned for his producers.

“I had 12,000 to 13,000 bales of cotton that needed to be ginned, and some of it was in good shape and some of it wasn’t in very good shape,” he said. “The round bales were blown around and ended up standing in water and had water damage on the bottom of them. Nobody likes to gin that cotton, not even when it is their own. But I had some of my local co-op buddies that came in and they ended up ginning a lot of that cotton.”

After enduring so much in a short amount of time, the cotton industry is stronger for having endured Hurricane Harvey. During times such as these is when the true spirit of the agricultural industry is allowed to shine, as are those within it.

“That is what keeps us going in agriculture – next year,” Wyatt said. “We are always looking to the one that is going to get us over the hump, heal the wounds and losses from previous years.”