Established in 1999, the Hall of Fame recognizes the contributions of co- op pioneers and honors those that have gone “above and beyond the call” in advancing the cooperative philosophy, according to KCC. The hall also plays a signi cant role in educating others about the uniqueness of the cooperative business model by highlighting the achievements of the state’s great co-op leaders and preserving co-op history. 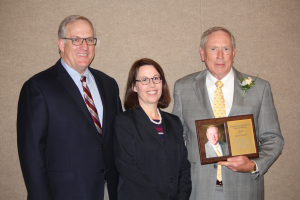 A native of Oklahoma, Cooper graduated from Oklahoma State University. Except for the first four years when he taught vocational agriculture in Oklahoma, his entire career was devoted to working for cooperatives: Farmland Industries, Triangle Insurance and PCCA. When he was promoted by PCCA to oversee business development in Kansas and Northern Oklahoma, Dick voluntarily relocated from Lubbock to Liberal, Kansas.

Throughout his career, Cooper was unabashedly passionate about co-ops and their members, and he never apologized for his fierce loyalty to co-op principles. In fact, he often questioned why anyone would do business outside of a cooperative if one was available.

Cooper was one of the first to recognize the potential for cotton production in Kansas and PCCA; however, there was very little infrastructure in place. He brought together investors to build three separate cotton gins in southern Kansas and organized three local grower-owned cooperatives to lease the gins.

“He realized that for cotton to be a viable choice for Kansas farmers, only a cooperative structure would ensure the broad level of participation necessary to start and sustain the new industry,” said PCCA President and CEO Kevin Brinkley. “His leadership and vision proved correct.”

“The concept to bring together investors and producers to create the basic infrastructure for Kansas cotton was very innovative,” said PCCA Vice President of Marketing Lonnie Winters. “Dick did the research and analysis that made it happen and opened the door for more Kansas farmers to grow cotton and bene t from its economic returns. He also was instrumental in convincing PCCA to build a warehouse facility at Liberal, and he facilitated this investment by obtaining financial incentives from the community’s economic development group.”

Cooper also realized a great opportunity with the development of 2,4-D and dicamba resistant cotton varieties and the Kansas governor’s development of a 50-year water plan for the state. With the potential for reduced damage from herbicides and cotton’s water conserving characteristic, he worked closely with the Kansas Department of Agriculture and the governor’s o ce to convince them cotton had a place in the water plan.

After helping establish the local co-op cotton gins, Cooper convinced them to create the Kansas Cotton Association to be their voice on a state and national level. He then served on KCA’s Board of Directors and as secretary-treasurer.

It is obvious why the Kansas Cooperative Hall of Fame chose Dick Cooper for induction. His legacy is based on the thriving cotton cooperatives he helped create across southern Kansas.