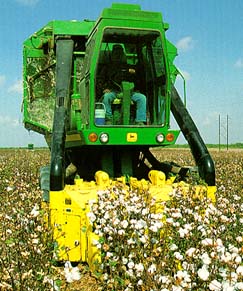 Harvest scenes such as this in the Lower Rio Grande Valley of Texas may be observed less frequently due to a combination of factors ranging from economic to environmental. Photo by John Johnson.

A variety of factors ranging from economic to environmental have combined in recent years to obscure the future of cotton production in Texas’ Lower Rio Grande Valley (LRGV), and these factors are, for the most part, beyond anyone’s control. The situation is cause for concern for marketers, merchants and U.S. textile mills that depend on the area’s cotton crop because it is the earliest harvested each season.

Declining cotton prices since late 1995, increasing cost of production, flexibility offered under the new farm law, prolonged drought and periodic extreme insect infestations have removed much of the luster of cotton production for LRGV producers. The situation is compounded by the Valley’s incredible agricultural diversity, but switching entirely from cotton to other crops may not be a long-term viable option.

Regular crop rotation is more essential in the LRGV than many other areas in order to keep a tight rein on weeds, plant diseases and insect pests. Yet, the economic factors and limited availability of irrigation water create a difficult dilemma.

“If we don’t grow sorghum in rotation with our cotton, I don’t know what we will grow,” says John W. Norman, Jr., Texas Agricultural Extension Service (TAEX)-Entomology in Weslaco. “Vegetables are very limited in acreage due to highly volatile prices, strong competition from other states and Mexico, and not enough good land with adequate irrigation water to produce them. At this (late october) vegetable plantings are off probably more than 50 percent which means less than 10,000 total acres for the fall plantings,” he continues.

“While our cotton acreage in Cameron, Hidalgo, Willacy and Starr counties in 1996 was more than most folks realized, it was significantly below average,” Norman adds. Certified cotton acres in the four-county area, according to USDA’s Farm Services Agency (FSA), totaled 181,225 in 1996, down 62 percent from a five-year average (1990-1994). A survey conducted by theValley Morning Star newspaper in Harlingen on September 18 pegged the region’s production at 161,186 bales, 49 percent less than the same five-year average.

Serious doubts about cotton’s future were raised in 1995 when an extreme outbreak of beet armyworms along with early adverse weather resulted in the worst crop the LRGV has ever witnessed. Certified planted acres totalling 339,242 that year should have produced approximately 400,000 bales based on a 580-pound average yield; however, at the conclusion of the harvest and ginning season the Valley’s final bale count was only 54,101, an average of only 80 pounds of lint per acre. According to TAEX, the loss was near $140 million in direct sales by producers based on the differences in projected average yields and actual yields.

“After the ’95-crop disaster, some producers just lost faith in cotton,” Norman adds, “and I’ve even heard reports that some bankers were not lending money to some producers due to those producers’ inability to stand the risk of the high costs of cotton production. It is my understanding that bankers were not prejudicing cotton per se because they reportedly lent money for cotton production to other growers who apparently were more solvent.” Interestingly, cotton insect pests were virtually non-existent in 1996, according to the entomologist.

Norman also notes some producers may have left cotton in 1996 in order to avoid paying their boll weevil eradication program assessments even though the spraying program there has been terminated. The assessments will continue to be collected until debts incurred to finance the program have been repaid or until legal action taken by a group of producers halts the collections.

As much as any other factor, though, cost of production and net returns most often determine the number of acres devoted to each crop in the LRGV every year. Coming on the heels of the insect- and weather-induced disaster of 1995, producers were facing prospects for limited net returns as they made 1996-crop planting decisions. 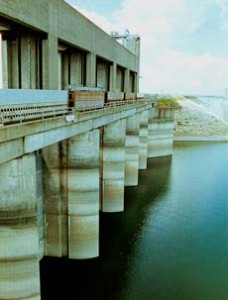 Visible water marks on the Falcon Reservoir spillway dramatically demonstrate the water level decline that has resulted from the prolonged drought in South Texas.

Early this year, TAEX calculated and published its “Texas Crop Enterprise Budgets” projected for 1996 in the LRGV. The data, including both variable and fixed costs, showed dryland producers there would receive a net return per acre of $69.76 based on projected average yields of 500 pounds. The scenario presented for irrigated producers by TAEX, however, was much less optimistic.

Despite projections for a 50 percent greater yield, the TAEX data showed irrigated cotton would return only $28.17 per acre in net profits due to much higher production costs.

“We must learn to reduce our input costs for producing cotton if the crop is going to be competitive with other commodities,” Norman advises. The TAEX figures, along with strict rationing of irrigation water and almost total flexibility provided by the new farm bill, probably explain the 62 percent drop in 1996 cotton acres.

While rainfall totals in much of West Texas this year may have returned to near normal levels, the drought in South Texas is far from being broken if water available for irrigation is any indication. Falcon Reservoir, almost 100 miles up river from the LRGV cotton fields, provides virtually all of the area’s water for both agricultural and municipal uses.

Through most of 1996, the reservoir’s water level remained 40 to 50 feet below the optimum level for providing producers much-needed irrigation supplies. Thus, strict rationing of water allocated to producers was implemented by the water district this year and likely will continue until the reservoir is replenished. When that will happen is anybody’s guess.

The vast majority of all LRGV crops rely on irrigation, thus cotton is not the only commodity to be affected by limited water supplies. The situation is so grim that it has led some to look forward to a hurricane.

“What we need is enough moisture like we typically see with a hurricane, but without the destruction of property, to come in and go far enough up river to fill Falcon Reservoir,” says PCCA Director Steve Bauer of La Feria. “Most folks here agree it is the only way the reservoir will be replenished anytime soon,” he states.

Other factors clouding the economic picture include an emerging and growing market for grain sorghum in Mexico. The North American Free Trade Agreement (NAFTA) is facilitating shipments of milo to poultry producers in the interior of the country, resulting in prices high enough to attract the attention of LRGV producers.

Producers in 1996 were able to forward-contract sorghum at prices ranging from $7.00 to $9.00 per hundred-weight, much higher than the $4.66 projected by TAEX earlier in the year. Based on the $9.00 contract price, producers could have realized a net return per acre of $75.55 for dryland and $73.99 for irrigated sorghum, according to TAEX’s projected 1996 budgets. Both were better than the projected returns for dryland and irrigated cotton. A budding soybean market also is noted by TAEX’s Norman thanks to a soybean crushing plant now in operation in Matamoros.

In spite of the uncertainty created by the variety of factors in the Valley, many producers and others seem to agree cotton will continue to be grown at some level in the region. It may require changes in cotton production practices or new legislation to make U.S. cotton competitive once again on the world market. One thing is certain: Change is inevitable.