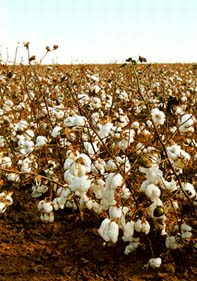 With the 1996-97 crop year now in full swing and the U.S. cotton crop size mostly known, the concern of most analysts is centered on the world market and the potential for U.S. exports.

Export sales have increased substantially in recent months as U.S. cotton prices have declined enough to generate business outside the country. Despite the dramatic surge, another 2.0 million bales in export sales (as of late November) are required to meet USDA‘s forecast of 5.8 million bales.

Most analysts believe the estimate is attainable as it is now apparent world cotton supplies are becoming tighter outside the U.S., which eventually could bolster U.S. exports. The potential shortage of cotton was illustrated in USDA’s November supply/demand report which lowered the world cotton production estimate to 87.2 million bales, down from 87.4 million bales in October, and reduced the department’s world consumption figure to 85.7 million bales from 86.0 million the previous month. When the U.S. production forecast of 18.5 million bales and estimated consumption of 11.0 million bales are subtracted from the world figures, the result is a 6.3 million bale shortfall. According to David Stanford, Plains Cotton Cooperative Association’s vice-president of marketing, “This difference between production and consumption outside the U.S. leaves room for U.S. exports to grow.”

“However, in order for the U.S. to aggressively seek exports, world prices must come up, U.S. prices must come down, or a combination of the two,” Stanford says. While short world supplies normally would indicate higher prices, a large carryover limits the chance for sustained price rallies this season. Meanwhile, this country’s prices are becoming more comparable to world prices, and U.S. cotton was featured on the Cotlook A Index as the fifth cheapest growth in the world in late November. According to one analyst, as the availability of the top four cheapest growths decreases, the demand for U.S. cotton will increase.

Market watchers expect U.S. cotton to fill some of the void left by production shortfalls in other cotton producing countries. Cotton production in China, Pakistan, and the Commonwealth of Independent States (CIS) of the former Soviet Union has decreased due to a combination of adverse weather and insect pressure in those countries. Pakistan’s cotton production, pegged at 7.6 million bales in October, was reduced to 7.1 million in USDA’s November estimate. However, many feel the number eventually will be reduced further as the crop continues to deteriorate.

Additionally, the problem-ridden crop in the former Soviet Union now has been harvested, and the cotton is of lower quality than normal. CIS cotton currently is the cheapest in the world; however, the supply may be nearing exhaustion as the crop is smaller than normal. The shortfall could create the potential for more competition between countries with available cotton.

The U.S. must expect export competition from India and Australia as the crops in those countries are projected to be above average. USDA says India will produce a bumper crop of 12.2 million bales and Australia is expected to produce its largest crop ever at 2.7 million bales.

Meanwhile, spot cotton sales on TELCOT have been strong, although domestic activity has been slow lately. According to one analyst, sales on the electronic marketing system should remain healthy for the near term due to good market activity, expanding export sales and the increasing availability of cotton on TELCOT.

Texas cotton has been in demand recently for its high quality as adversities in other countries have caused a shortage of high grade cotton. The West Texas cotton crop got off to a slow start this season but beneficial rains in late August and favorable october weather resulted in an amazing recovery. In november, USDA estimated texas cotton production at 4.0 million bales, 200,000 more than the previous month.

The quality of this year’s Texas crop is exceptional and the high grade cotton will fill a need in the export market,” Stanford adds. “This is a significant accomplishment in moving customers away from the old short-taple mind set and nearer to the acceptance of the cotton Texas growers are producing today,” he says.