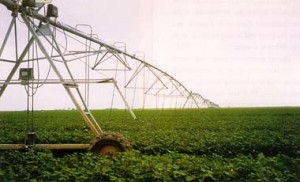 LEPA center pivot sprinkler systems are one of the most eficient irrigation methods available today.

Statistics illustrate that agricultural producers are installing efficient irrigation equipment that is contributing to ground water conservation in the Texas High Plains area.

According to a 1998 inventory, 11,287 center pivot sprinkler systems were in operation within the 15-county High Plains Underground Water Conservation District No. 1 service area. The 1998 inventory indicates that an additional 2,169 systems had been installed since a previous study in 1995. This equates to a 19 percent increase in the use of center pivots in the three-year period.

Each center pivot sprinkler system costs about $35,000 which means the 11,287 pivots in operation within the district in 1998 represented a $395 million investment in water conservation by area agriculture producers.

Center pivot sprinkler systems are self-propelled machines that move in a circular path around a pivot point. Some of the earlier center pivots were powered by water drive motors operated from mainline pressures of 90 to 100 pounds per square inch (psi). These center pivots had impact sprinklers mounted on the mainline which sprayed water high into the air, resulting in large evaporation losses. Today, the systems run on electric or hydraulic motors located at each tower. In addition, use of drag hoses or drag socks apply water at low pressure directly into the furrow.

Much of the labor associated with sprinkler irrigation has been reduced because of the improvements that have been made to center pivots in recent years. These include improvements to the drive mechanisms, control devices, and structure of the machines.

Manufacturers are continually improving and refining center pivot sprinkler systems and components to help reduce water losses. This technology can be beneficial as long as the system is operated as designed. 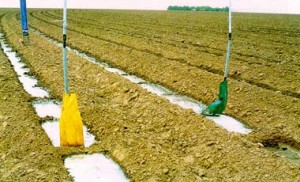 “Labor has been significantly reduced because of automated programs that allow the producer to operate the system at a specific speed for a specified amount of time applying a known quantity of water uniformly across the field,” says Carmon McCain, High Plains Water District information/education director. “Computer technology has allowed for much convenience, and in some applications, the producer can turn the center pivot system on or off simply by using a telephone.”

Low Energy Precision Application (LEPA) center pivot sprinklers are one of the most efficient irrigation methods available today. These systems can achieve irrigation application efficiencies of up to 98 percent. Water losses associated with evaporation and wind drift are essentially eliminated because ground water is applied at low pressure directly into the furrow. LEPA systems also help reduce labor and fuel costs and save up to 40 percent of the water pumped for irrigation when compared to conventional furrow irrigation. Reduced water losses with LEPA center pivot irrigation generally result in 20 to 25 percent more water being available to the crop than when pivots equipped with high-pressure impact sprinklers or spray nozzles on droplines are used. Use of furrow dikes to hold water from the LEPA system in place until it can soak into the soil also improves water use efficiency.

“The latest technology is helping improve water use efficiency and crop yields,” says McCain. “Being able to control water application rates allows producers to pump the same amount of water to produce a higher yield or reduce the amount of water previously produced by 20 to 25 percent and make the same crop yield.”

Additional information about LEPA center pivot sprinkler systems is available by contacting the High Plains Underground Water Conservation District No. 1, 2930 Avenue Q, Lubbock, Texas 79405-1499, or by calling (806) 762-0181. The district’s web site address is www.hpwd.com and its e-mail address is info@hpwd.com.