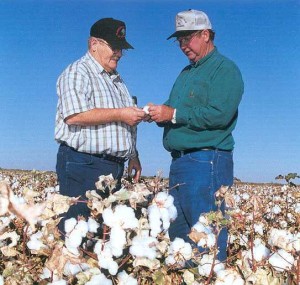 Billy Eggemeyer surveyed one of his cotton fields, a 400-acre tract, in late September and estimated his yields at 2.0 to 2.5 bales per acre. Approximately 15 miles east of Eggemeyer’s farm, Wendell Jones walked through one of his cotton fields with similar yield potential. Both fields were incredible sights for an area that received little beneficial rain during the year and where water available for irrigation is extremely limited.

How do producers like Eggemeyer and Jones in the St. Lawrence Cotton Growers area of West Texas, served by Glasscock County Coop and Midkiff Coop gins, manage to produce high yields in such dry conditions? Eggemeyer says it is due entirely to one of the best investments he ever made: a sub-surface drip irrigation (SDI) system.

“This region normally averages 14 inches of rain per year,” Eggemeyer explains, “but in the past few years, our annual rainfall has averaged only about six inches. Without drip irrigation, most of us couldn’t survive down here.”

Born and raised in the Midkiff community (Upton County), Eggemeyer has been farming since 1974 and installed his first SDI system on a 20-acre plot in cooperation with his local agricultural extension service in 1987. He plowed in drip tape 120 inches apart on the trial plot in a two-and-one cropping pattern.

“I was making 1,300 to 1,600 pounds of lint per acre with a system that was capable of delivering 2.5 gallons of water per acre per minute,” Eggemeyer recalls. “But, insects ate the tape, so I plowed it up.” 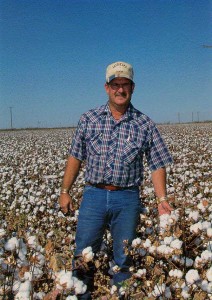 In September, Billy Eggemeyer (above) estimated this field would yield up to 2.5 bales per acre.

Despite the setback, other producers in the area began installing SDI systems, and by 1998 Eggemeyer was ready to give the concept another try. Improved drip tape and automatic flushing systems had been introduced to SDI.

Based on designs from his SDI equipment supplier, Eggemeyer began installing the system himself on his farms to keep costs at a minimum. By the 2000 crop- year, all 1,100 acres of his cotton was drip irrigated. He estimates the system has cost approximately $500 per acre; a figure that is at the low end of most extension service and water conservation district estimates for SDI systems which are rated at 98 to 100 percent irrigation efficiency.

Eggemeyer’s first 400-acre SDI tract is fed by 16 wells, each 360 feet deep, which are “tied together” and pumped to two central drip houses. From there, the water is filtered and distributed to the fields via a main line also known as a manifold pipe. The drip tape running the length of the cotton rows is 12 to 14 inches deep.

“At the drip houses, we can inject our nitrogen fertilizer into the system,” Eggemeyer explains. “That’s also where we inject sulfuric acid at the end of the season to remove scale from the lines and emitters and kill algae.”

Somewhat surprisingly, Eggemeyer says enhanced yield potential is not the foremost advantage of SDI on his farms. Reduced production costs have a greater impact.

“Drip irrigation has allowed me to utilize minimum tillage in my farming operation,” Eggemeyer states. “Now, I make only five trips a year over my fields. This has cut my labor costs by 75 percent and my machinery costs by at least 50 percent.” The use of Roundup Ready cottonseed is another important factor in Eggemeyer’s farm management. He calls it “icing on the cake” in enabling drip irritation systems to work effectively. 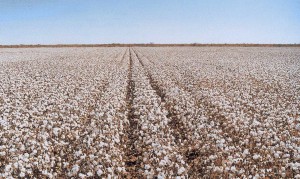 “The bottom line is that I can save enough on labor and wear and tear on equipment to pay for my drip irrigation systems,” says Eggemeyer, a director of Midkiff Coop Gin and member of PCCA’s West Texas/Oklahoma Marketing Pool Committee. “The extra lint yields I obtain is gravy.”

Wendell Jones, a director of Glasscock County Coop Gin at St. Lawrence and a member of PCCA’s Board of Directors, farms a few miles east of Eggemeyer. He is a recent convert to SDI; the 2000 cotton crop was his first with the water saving system.

“Water is a critical factor, especially in this region of Texas,” Jones says. “Drip irrigation is the best way to utilize the water I’ve got.” Jones installed SDI on 200 acres earlier this year and says he may install more if the cost of electricity to power his wells and the cost of SDI equipment do not become prohibitive.

Like many of his neighbors utilizing SDI this year, Jones anticipated yields of better than two bales per acre in early October. Rainfall had little to do with his optimism.

“We only received six or seven inches of rain this year,” he adds, “and most of that fell at inopportune times or was too much at one time to do any good.” Jones estimated at the time that some of his furrow- irrigated cotton would yield only one-half bale per acre.

Studies indicate SDI systems may produce greater economic returns compared to other systems such as Low Energy Precision Application (LEPA) under certain circumstances. These include LEPA installation costs of more than $350 per acre, where topography or other obstructions such as power lines prevent the use of LEPA, where SDI installation costs are significantly less than $800 per acre and where irrigation capacity is limited and/or declining.

For producers Eggemeyer, Jones and others in the St. Lawrence Cotton Growers area, the latter circumstance is the deciding factor where unofficial estimates place 2000-crop SDI acres at approximately 23 percent of all cotton acres.

“Even with drip irrigation, the water output for many of our farms in this region is considered a deficit based on cotton’s water requirements,” Eggemeyer explains. “Yet, we consistently manage to harvest excellent yields with drip. I’m waiting for the year when it rains 10 inches or more to see just how much cotton we really can produce with drip irrigation.”