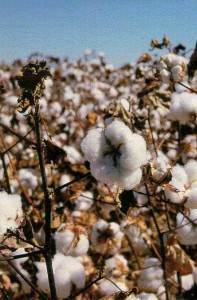 Excited discussions of a bumper U.S. cotton crop quickly turned to worries of extensive crop abandonment this season, as weather conditions took their toll on key areas of the Cotton Belt. However, the United States did not suffer environmental adversities alone, and world production numbers also are expected to be wrenched lower due to shrinking crops overseas.

USDA‘s December crop estimate was considered to be optimistic in light of adverse weather conditions in major U.S. cotton growing areas. The Department of Agriculture surprised the market in December by lowering its U.S. cotton crop estimate just 110,000 bales to 17.4 million bales and leaving carryout at 3.9 million, though many anticipate further reductions in the final report.

Although the department’s supply/demand report altered 2000-01 cotton production in eight out of 17 states, Arkansas and California were the only states to show a rise in production as higher than average yields in the two states have boosted cotton output. Reductions in estimated output totaling 255,000 bales were made in South Carolina, Missouri, Mississippi, Louisiana, Texas and Oklahoma, with Texas/Oklahoma showing the heaviest loss at 210,000 bales.

Alterations to outturn and yields were made to most cotton-producing districts in Texas. The statewide average yield was pegged at 410 pounds per acre, a decrease of only 20 pounds per acre from the November estimate, and Texas cotton production was placed at 4.1 million bales.

“I think USDA didn’t want to cut Texas production any more than it did because, at the time of the report, producers still were trying to determine if their crop was worth harvesting,” an analyst commented.

“A lot of cotton will not be harvested and abandonment is going to be unusually high,” one West Texas source said in mid-December. “There’s a lot of lint on the ground, and farmers are just going to take the insurance payment.”

As for global production, USDA placed the world crop at 86.6 million bales, down a mere 5,000 bales from the previous estimate and a sharp contrast with market expectations for a large reduction. Additionally, the world consumption figure slipped 270,000 bales to 92.2 million. With higher world beginning stocks, the projected world carryout rose to 35.6 million bales rather than falling significantly as analysts expected.

USDA lowered production in Uzbekistan, Australia, and India, and more reductions are expected in China and Pakistan later this marketing year. The production cuts should tighten exportable cotton supplies resulting in a situation that is seen as positive for the United States.

Smaller crops are expected in several key cotton producing countries which will result in a tightness in supply. In fact, traders said crop estimates from overseas have seesawed this fall as weather conditions fluctuated. The most recent estimates have been mixed with some estimates higher than earlier cuts and others far below previous ideas. All in all, most in the industry expect world output to slide and mill use to drop slightly while ending stocks remain fairly tight. However, most of the world’s cotton is being harvested at this time and will reach the world market all at once. Therefore, it will take some time for the supply crunch to be felt by the market, thereby forcing cotton prices to adjust higher.

Meanwhile, world consumption remains on its record setting pace, but U.S. domestic consumption remains under pressure. Daily mill use of raw cotton unexpectedly dropped in October, according to data provided by the Census Bureau and the National Cotton Council (NCC). In its report released Nov. 30, 2000, NCC reported U.S. textile mills in October used cotton at a seasonally adjusted annualized rate of 9.58 million bales, down from the downwardly revised September figure of 9.81 million.

A NCC economist tied the dramatic slump in mill use to a slowdown in the U.S. economy and fierce competition with foreign textile imports.

“I expected it to be low but not necessarily that low,” she said. “There were some mill closings and temporary plant shutdowns which had more effect than many thought.”

An analyst said retail denim demand still is strong in the United States so the factor behind the drop in mill use could well be foreign denim imports made all the more competitive by the strong U.S. dollar.

For the past several years, textile mills have been purchasing cotton on a hand-to-mouth basis and using carryover stocks as a cushion against the rising costs of current crop cotton. However, mills were not prepared for the tightness in supplies brought on by the quick disbursement of this year’s surplus cotton and should soon be in need of materials to cover nearby obligations.

According to one industry observer, “The cotton outlook is improving as the immediate need for cotton, coupled with the recovery of foreign currency against the strong U.S. dollar, should result in increasing cotton sales in the near-term.”

As of this writing, spot cotton sales of Texas/Oklahoma/Kansas cotton have not been as brisk as they have been in past years. It appears a standoff has resulted from a general reluctance by both buyers and sellers to make sales at the current price levels. Negotiating cotton prices has been touchy this season as both parties are generally disappointed by lower cotton qualities and yields but still must find a way to make a profit.

According to one market observer, the lackluster demand in the spot cotton market soon will be replaced by a respectable amount of cotton sales.

“Currently, the world market is flooded with cotton, and no urgency is felt by buyers or sellers to make a move,” a West Texas analyst commented. “The situation will improve, and all of this cotton will successfully find a market with both sides eventually reaching an agreement on price,” he added.