Creates Signature Brand for Wal-Mart and Other Discount Stores 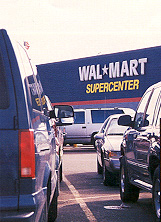 Seeking to win back the bargain-minded shopper, Levi Strauss & Co. (LS&CO.) announced on Oct. 31 a deal that will introduce a new Levi’s brand to the world’s largest retailer. Wal-Mart, in an effort to add more stylish apparel to its stores, will carry the new Levi Strauss Signature brand of jeans, shirts and jackets beginning in July 2003, in time for back-to-school shopping.

The deal gives LS&CO. access to discount stores, where it has been absent in the past, and should boost the company’s share of the U.S. jeans market.

“This deal is helpful to everyone involved,” PCCA Vice President of Operations Darryl Lindsey said. “This should result in increased business for our American Cotton Growers (ACG) denim.”

The brand is not exclusive to Wal-Mart, and LS&CO. is negotiating with other discount stores. Consumer research and other preparations began in 2001 because LS&CO. wanted to ensure the new brand carrying the Levi Strauss name could be easily differentiated and would not cannibalize sales of its red tab line at retailers like J.C. Penney, Sears and Kohl’s, currently the lowest- priced tier in LS&CO.’s distribution network.

“The key issue to avoiding cannibalization is to sell two distinctive brands,” Lindsey said. “With this, Levi’s should be able to attract a large number of new customers.”

The Signature brand, with products for men, women and children, will include jeans priced under $30, a price level where 42.5 percent of all jeans in the U.S. are sold. The new jeans will look distinctly different from Levi’s red tab label; without Levi’s trademark red tab and arch stitching on the back pockets. The label will be different, containing the founder’s name on the back waistband tag. 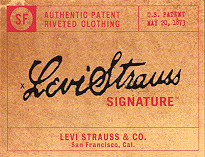 LS&CO. says it will be sure the Signature brand has different fabric finishes, washes and styling since customers paying higher prices at department stores do not want to see the same clothes sold at discount.

While hoping to drum up sales with low-priced jeans, LS&CO. does not want to tarnish the reputation of its higher-priced jeans, some of which sell for more than $200 at retailers like Barney’s.

“Our goal is to market the most appealing and widely worn casual clothing in the world to consumers of all ages and lifestyles,” said Phil Marineau, chief executive officer of Levi Strauss & Co. “We’ll do this with a portfolio of brands, each designed to appeal to different segments of the population wherever they buy clothing, whether it’s high-end image shops, department stores or the mass channel. Each of our brands will be distinctive, but they will be rooted in what we stand for _ originality, quality and style,” Marineau concluded.

“Levi’s sees this as a consumer segmentation strategy,” Jack Mathews, PCCA’s vice president of Fabric Sales Marketing, said. “They want their jeans to be available where most consumers shop. Previously, the majority of their sales were to department stores, never to mass merchants,” Mathews added. “There was much concern regarding cannibalization of their existing customers like Sears and Kohl’s, but it’s smart that they’re making a new face for the new line of jeans.”

LS&CO. is rolling out the Signature product to all 2,800 domestic Wal- Mart stores in July 2003, and with the changing economics of the retail industry, the company’s decision was inevitable.

“It makes sense to have their product in the discount tier,” Mathews said. “This tier of distribution accounts for more than one-third of denim jean sales in America.” Other than consumer segmentation, Mathews said Levi’s has a phenomenal opportunity to increase market share.

“Most people that shop at Wal-Mart rarely go to a higher-end store,” Mathews said. “They are loyal consumers and enjoy low-price shopping which should translate to better business for Levi Strauss.”

Certainly, some of PCCA’s production will be going to Wal-Mart because several ACG denim styles have been designated for the new brand of jeans.

“This is a big gamble,” said Kurt Barnard, president of Barnard’s Retail Trend Report. “If it works, it will be one of the most spectacular things this industry has ever seen.”