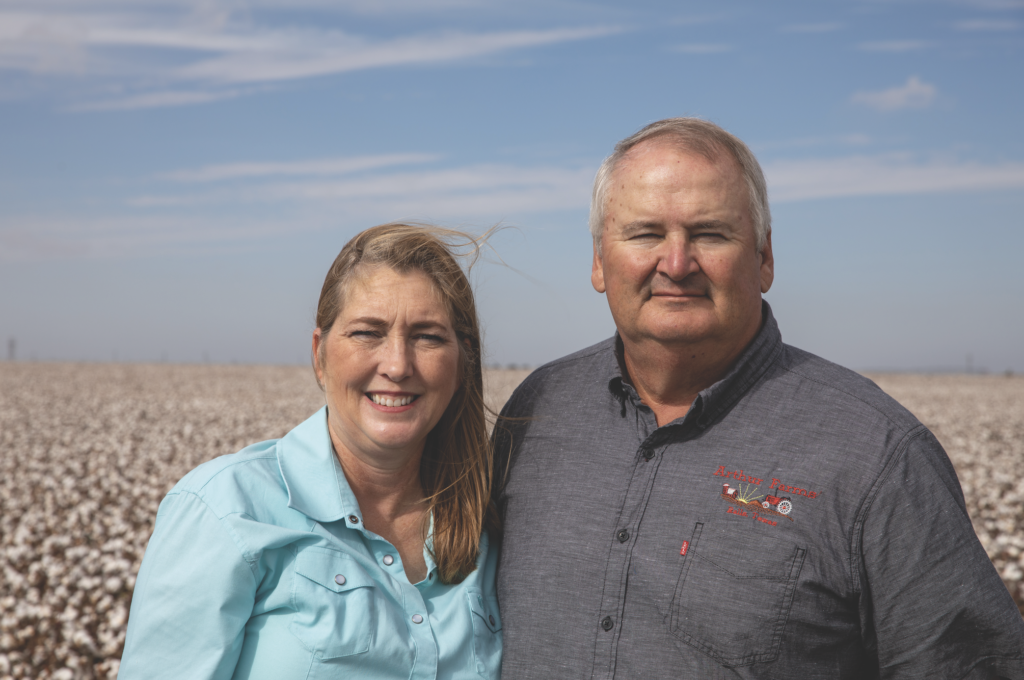 Lloyd Arthur is not a “this is how we’ve always done it” type of farmer. His family history is as rich as the soil he tends, and his use of technology on the farm is as cutting edge as it comes.

“We are caretakers of the land,” Arthur said. “We want to leave it better than we found it. We have done that over the years with technology and farming practices that have changed. We are producing more with less acres nowadays, feeding and clothing a hungry world.”

Arthur was born and raised on a farm in Ralls, Texas. He still works the same farm. Arthur has been farming his entire life, starting with his late father and late brother in the 1980s. Today he operates a mix of irrigated and dryland cotton and grain sorghum. He is heavily involved in his community and the cotton industry, serving on numerous committees and boards, including but not limited to Texas Farm Bureau, Cotton Incorporated, The FiberMax Center for Discovery, and his local soil and water conservation district.

Arthur has always heeded the call of innovation, deeply knowing that the land and farmers like him need the help of technology to maximize hard work and potential. Though Arthur uses many top-of-the-line tools in his operation today, he clearly remembers the first innovation he ever tried.

“The first thing we did that was kind of out of the norm was going from six-row equipment to 12-row equipment back in the 70s,” Arthur said. “When most people went eight-row, we went 12-row.”

That first step launched the continual use of innovation for Arthur Farms. In 1992, Arthur installed his first center pivot. Though the landscape now features many, he recalls it being one of the first in the area. Arthur said he, his father, and his brother would even build their own farm implements when equipment manufacturers did not have the equipment they needed. This creative problem-solving would eventually lead his children to take farm innovation into their own hands years later.

“The pivot service crane that my kids built, which they have a patent on now, was quite an innovation,” he said proudly. “A person like me can go out and change a pivot flat in about 15 minutes without cutting the pivot water flow off, without having to start the wells over, and without having to manhandle that tire in the mud. There’s only one of them in existence at this time – my two sons built it and obtained the patent on it while they were in college.”

Water then became the name of the game for Arthur Farms. Arthur became involved with the Texas Alliance for Water Conservation in 2012. At the time, TAWC existed in Floyd and Hale counties and was looking to expand. In Crosby County, Arthur tried to test new irrigation techniques solo on his farm. TAWC’s call came at the perfect time.

“It was one of the best things I have ever done because we were trying to test some of these things on our own,” he said. “Then I had their knowledge and techniques, and the folks there knew what was happening in other parts of the industry too. On several different pivots over the years, we used different technologies from manufacturers to research and see if they provided a good service for farmers in irrigation technology and techniques. Some of them worked well and some of them did not.”

Today, Arthur uses variable rate irrigation and soil moisture probes on his farm. He works with TAWC and other industry companies on inventing and fine-tuning products that can potentially maximize a farmer’s inputs and yields. The technology he uses does not live on the pivots and probes alone – Arthur can control everything at his fingertips.

“I have this technology on all of my pivots,” he said. “I can check it with my smartphone or laptop computer. I can set a specific program for each one of my pivots depending on the slope of the field, layout, or the crop that’s growing on it. We also use soil moisture probes. Once we started putting that technology in the field, we noticed that how we were currently irrigating wasn’t quite right and we changed our irrigation strategy. It took some of those instruments in my field to get that ‘aha’ moment. We didn’t realize it until we had an instrument telling us that we weren’t getting any water in the root zone.”

Arthur does not implement this technology just for the sake of being trendy. Instead, one of his most significant motivating factors is the success of his operation, and that success hinges on money more often than not.

“I’m always skeptical of making sure I am spending this money wisely,” Arthur said. “When folks come out and add an attachment to one of my irrigation systems, I tell them if this doesn’t save me money or make me money, your product is no good to me. This year, we are evaluating a new product that is actually attached to the pivot. Instead of giving you one soil measurement in one place in the field, we can get the different quadrants around the pivot. It all comes back to the cost and the return on your investment. Is it going to make you more profitable or make you more conservative of your natural resources?”

Sustainability is also an essential factor in Arthur’s use of innovative technology on the farm. The concern of depleting the Ogallala Aquifer is top of mind.

“We know that the Ogallala is a declining aquifer,” he said. “It has been for many years. Whatever you can save for the next year is going to benefit your farming operation. We have just enough water here to supplement the rainfall. We have been fortunate in 2021 to have some timely rainfall. It’s critical to maximize that water. You have to learn what your farm is telling you and use those instruments to adapt and change your plan midstream. It gives you that advantage.”

The increased demand for sustainable cotton from global customers requires a change of cotton farmers as well. Merchants and mills need to see proof of sustainably grown crops before they purchase and use them, and that proof comes by way of the U.S. Cotton Trust Protocol. As Arthur served on the Cotton Incorporated board, he was able to participate in the pilot program.

“It’s a necessary ordeal that we are having to go through because our product goes to the folks that are wanting to see that,” he said. “If I can’t get my product, whether it be cotton, milo, corn, anything, to that end-user, it’s not going to be beneficial for me. Times have changed. Our customers are asking for different things than they did 20 years ago. We’re trying to adapt, and I think the U.S. Cotton Trust Protocol has been great. I encourage farmers to participate and try to increase their sustainability to get the crop to the end-user, so they are more confident in what they’re wearing.”

Another resource that Arthur leverages is PCCA. Working to use new farming methods requires time and he does not always have additional time to market his cotton independently, which is where PCCA steps in.

“I have relied on them for years for marketing my cotton,” he said. “Farmers, especially me, have so many things on their mind every day. If you don’t look at the markets every day and take advantage of the highs and lows, you’re going to miss opportunities. So PCCA over the years has been a good tool. I have used their pool approach or other marketing to sell my crop in a timely, profitable manner.”

No matter where a farmer may be in establishing his operation, Arthur encourages the use of new technologies and leveraging resources. Skeptics of trying new things can rest easy though – it is possible to improve the efficiency of a farming operation without breaking the bank.

“Do you need it on every field? No,” Arthur disclaimed. “If a farmer just has it in one or two areas, I think he will have enough information coming back to him that can tell him how to adapt those fields that maybe don’t have the technology. You know, not everybody has the finest stripping mechanism, but you can take portions of it and utilize it in some of your fields and increase your sustainability and do better for your carbon footprint.”

Even Arthur, usually quick to adapt to new technologies, shares that he can sometimes be hesitant to change.

“I think the fear of change or doing something different sometimes is something I struggle with today,” Arthur said. “Don’t be afraid to let folks come on your farm and tell you some things. We’ve had folks on our farm from Brazil, Peru, all across the Cotton Belt, and industry people from the marketing to the fashion side. You know, maybe you do it small, but don’t be afraid to let someone come to your farm. Once you start telling your story, maybe that little light will come on to them, and they’ll say, ‘I didn’t think it was this way, and it’s actually better than what I thought.’ Don’t be afraid of change.”

Lloyd Arthur has learned many valuable farm-oriented lessons throughout his years listening to the land and heeding the call of innovation. In his years of community and cotton industry leadership, he has learned just as much about people.

“I have learned over the years being in the leadership of agriculture, whether it be in the cotton industry, Farm Bureau, or anything else, it’s important to tell your story,” he said earnestly. “If you don’t, somebody else will tell it for you. In today’s society, it’s very important to tell your story. We are doing a lot of great things and good things here in agriculture.”