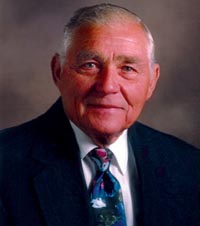 Raymond Althof has worn many different hats in the cotton community. A man not only known for his contributions to the cotton industry but also for his quiet sense of humor and friendly demeanor, Althof will not be forgotten following his recent retirement from the PCCA Board of Directors.

Althof is a lifelong farmer who, no matter how many jobs he undertook in the cotton industry, always continued farming with the help of his wife Ina.

For 23 years, Althof served on the Roscoe Cooperative Gin’s Board of Directors, including seven of them as its chairman. He also served on the Rolling Plains Cooperative Compress (RPCC) Committee since 1975, becoming chairman in 1983. As chairman, he conducted meetings and acted as spokesman for the warehouse, and his leadership made the compress more money through important, value-added services to its members. RPCC has reported margins of more than $43 million since 1983 which were paid back to members through dividends. Althof led the compress through the conversion to an electronic title system which eliminated paper receipts, and RPCC also built additional warehouses in 1993 and 2004 to store an increasing volume of cotton delivered to the facility. Gary Setliff, current manager of RPCC, could not name just one great contribution Althof has given to the cotton industry.

“His time spent on committees and boards, his longevity, his conservative approach to running a business and his work ethic,” Setliff listed in describing Althof’s service. “He is very well respected and well thought of.”

In 1983, Althof was elected to the Plains Cotton Cooperative Association (PCCA) Board of Directors. During the years he served on the board, many important events occurred at PCCA. The American Cotton Growers denim mill was purchased which provided added value to PCCA members’ cotton, and an electronic title system was developed for the U.S. cotton industry which made selling cotton easier and faster. PCCA also extended its cotton marketing services to Central Texas and Kansas while co-founding The Seam. 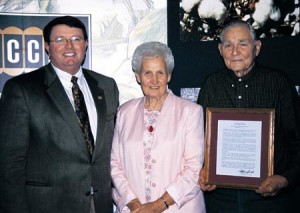 PCCA Chairman Eddie Smith (left) presents a board resolution to Raymond Althof and his wife Ina in recognition of his service to the cooperative.

While a member of PCCA’s Board, Althof continued as chairman of the RPCC committee. Dean Church, now vice president of Grower Services for PCCA, became manager at RPCC in 1995. Church says he remembers Althof cared about him as a person first and a warehouse manager second.

“He made it easy for me,” Church says. “He helped me not to fall into a lot of traps that I might have without his help.” Church also says Althof had a calm sense of leadership that enabled him to see the bigger picture and made his leadership invaluable.

“Raymond was truly a cooperator,” Church says. “He wanted to make sure the community and the coop were taken care of even at his own expense.” Althof’s wife Ina has been by his side through the years, and she is as fondly thought of as Raymond, himself. Church recalls she has always been ready to help at a moment’s notice.

“When he had to go do something for PCCA, she was always ready to take over by hopping on a tractor or whatever she had to do,” Church says.

After so many years of contributing to the cotton community, Althof has earned the respect of everyone who knows him. As he retires, he can hang up his many hats with pride knowing what an asset he was to the PCCA Board of Directors and the cotton industry as a whole.