“If we don’t preserve the history of agriculture now, who will in the future?,” says Angela Beesley, the executive director of the American Museum of Agriculture. The City of Lubbock has offered the museum a great opportunity to expand its facilities; however, there is a challenge that comes along with the opportunity. In order to receive the 25 acres of land offered by the city, the museum must raise $1 million for the project.

“It is our responsibility to acknowledge that agriculture is what brought life to the South Plains, and it is important to teach the youth of today what farm life was like in the past,” says Beesley. Too many people once thought the old machinery left on their farms was junk; however, this “junk” was part of a farming heritage going back generations. To Alton Brazell, a Lubbock County Commissioner for 36 years, that junk was a hidden treasure. In 1969, Brazell took it upon himself to begin a collection of agricultural equipment and machinery that told the story of American agriculture. This collection became the property of the Lubbock County Commissioner’s Court and was known as the Lubbock County Historical Collection. Part of the collection was housed on five acres in Shallowater, Texas. The remainder of the collection was stored in a warehouse in downtown Lubbock.

In August 2001, a group of agriculture industry leaders from throughout the South Plains gathered in Lubbock for the first meeting of a non-profit organization, The American Museum of Agriculture. The Lubbock County Historical Collection permanently loaned the exhibits to the fledgling organization in 2002. The museum, which is located at 1501 Canyon Lake Drive in Lubbock, opened its doors to the public in May 2002. The museum strives to preserve the history and tell the story of American agriculture. 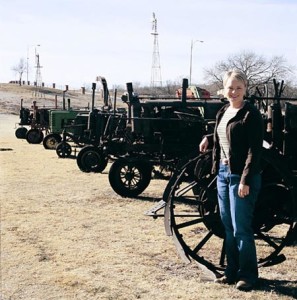 Executive Director of the American Museum of Agriculture, Angela Beesley

The American Museum of Agriculture is open from 10:00 a.m. until 5:00 p.m. Wednesday through Saturday. On average, 4,000 to 5,000 people walk through the museum each year. The museum does not charge an entrance fee, but it encourages a three dollar donation at the door.

The collection ranges from household items to moldboard plows and tractors. The American Museum of Agriculture currently displays restored tractors, a threshing machine, broadcast binder, a combine, 71 pedal tractors, 300 die-cast toy tractors, and approximately 300 other artifacts and pieces of smaller equipment. For now, the current museum is not large enough to hold all that has been collected during the past 35 years. Consequently, horse-drawn equipment, field condition tractors, threshing machines, combines, grain binders, mowing machines, grain drills, hay rakes, hay balers, cotton strippers, and cotton trailers are being stored in Shallowater as well as the Lubbock warehouse.

The newest development for the museum is an offer from the City of Lubbock to donate 25 acres north of Broadway for a new museum building. The City has stipulated that before any work can be done on the site, the organization first must raise $1 million to fund the project. Consequently, the museum’s current top priority is to raise money for the new building and outdoor tractor display. In the past year, $130,000 has been raised for the cause.

One idea proposed by the museum’s board of directors is to ask all of the cotton gins on the South Plains to donate 5¢ for every bale ginned this year to the museum project. This would help the museum raise money by going directly to those groups that should be most interested in the preservation of farming history. Several gins have made this commitment, some for as long as the next five years. Beesley has made a point to talk directly with many of the farmers on the South Plains, and she plans to meet with many more over the next few months to discuss monetary donations as well as donations of artifacts for the museum.

“With Lubbock being so rich with agricultural heritage, this museum will bring many tourists to the area and will shine a spotlight on the cotton industry that is a large part of life here on the South Plains,” says Beesley. “The very equipment that is being displayed at the museum is what many of the farmers in the area used in the past and was the precursor to what farmers are using today.” PCCA President and CEO Wally Darneille is a member of the museum, and he agrees with Beesley.

“We should all be proud Lubbock is home to this museum,” Darneille says. “I hope PCCA members will support this worthwhile endeavor.” Beesley can be reached at (806) 239-5796.